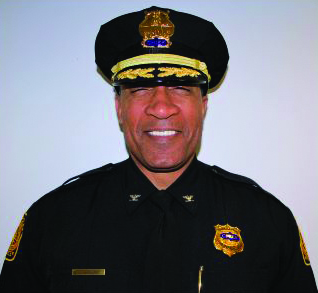 NORFOLK
Norfolk Police Chief Larry Boone received the Eric Holder Leadership Award from the National Organization of Black Law Enforcement
Executives (NOBLE) on July 30
According to a report by NEWS Ch. 3’s Barbara Ciara, Boone was honored for his focus on law enforcement leaders who have helped bridge the gap between police and community.
Chief Boone told Ciara his inner-city background gives him a unique perspective for the award.
“You know… coming from where I started, I would have never thought it,” Chief Boone said, swelling with emotion, according to Ciara.
According to the NPD website, Chief Larry Boone began his successful law enforcement career with the Norfolk Police Department (NPD) in 1989. He was previously appointed as the Deputy Chief before taking the reins as Chief of Police on December 1, 2016.
NPD has some 757-plus officers. During his tenure as chief, Boone has made “neighborhood outreach” where he goes put directly to interact with the people he and his officers are sworn to “serve and protect” a viable part of his mission as leader of the Boone’s Department has been in a battle of lip-syncing cops gone viral on social media. His officers have challenged officers from across the country to compete in producing a video revealing an exposure to urban and hip-hop culture, which has gone viral.
“It sends that message to all because it was very diverse – men, women, black, white; all different shapes, everybody enjoying themselves,” he said.
He says you don’t have to be black to understand what goes on out on the streets, but he also adds: you don’t know what you don’t know.
“The reality of it, most chiefs of police don’t have my background,” he said. “I tell my officers we have to earn the trust. I lead this department from a perspective of yes, we have authority but you’re going to have humanity with that authority.”