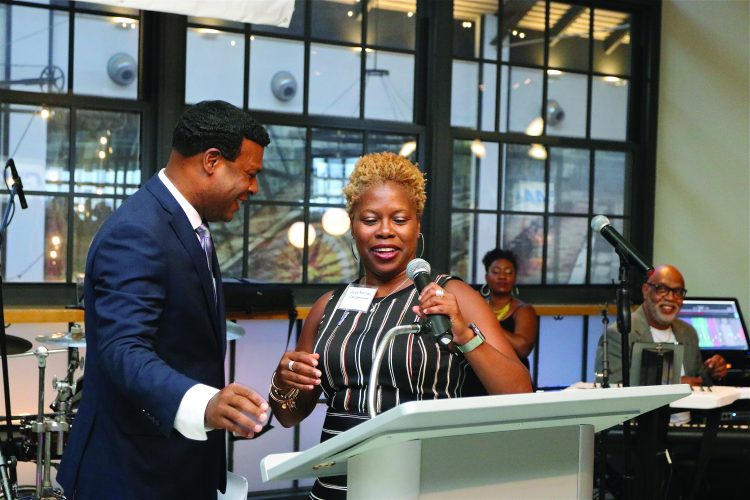 NORFOLK
Mayor Kenneth Alexander of Norfolk made the invitation to come his city loud and clear last week during a visit to the area of CIAA Commissioner Jacqie McWilliams and her team. The CIAA currently is housed in Charlotte, N.C., where it annually generates more than $55 million for the host city. Commissioner McWilliams and the Mayor are shown during a reception on her behalf hosted by the city at the Harbor Club.

CIAA Commissioner Jacqie McWilliams and her team were in Norfolk last week which allowed Mayor Kenneth Alexander and his team to make a serious pitch for the CIAA to relocate its conference to Norfolk. A hearty reception on Wednesday at the Harbour Club, complete with a supportive crowd to urge on the move to Norfolk, was followed up on Thursday with a luncheon at the Town Point Club where Commissioner McWilliams delivered a PowerPoint presentation on CIAA’s structure and vision to members of the business community.

She also announced the opening of a new online store where CIAA items can be purchased for all of the participating members of the conference.

Over the past 10 years, the CIAA has generated over $325 million in economic impact for the “Queen City,” Charlotte, N.C., where it is housed, while annually generating over $55 million for the host city. With the support of the City of Charlotte and CIAA corporate partners such as Coca-Cola USA, Nationwide, Food Lion, Toyota and Russell Athletic, the conference has secured over $20 million in scholarship dollars for its member institutions over the past 13 years, averaging $1.5 million annually.