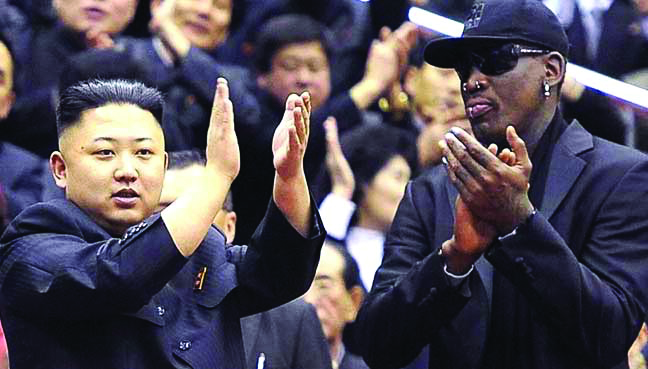 TriceEdneyWire.com
There’s a lot of talk that President Donald Trump deserves the Nobel Peace Prize for opening a dialogue with North Korea and thus lowering world tensions. But others argue that Dennis Rodman deserves that honor, or if Trump receives the coveted award he should share it with Rodman.

Rodman, a former NBA star, has been friends with Kim Jong Un, North Korea’s leader, since they were first introduced in 2013. Un is a basketball fan and he genuinely admires Rodman, who played for the world championship Chicago Bulls and the Detroit Pistons.

Rodman, a former power forward, has five NBA championship rings and he was the league’s rebounding champion for seven consecutive years. Needless to say he also is a member of the NBA hall of fame.

Rodman has visited Un in North Korea several times, sparking rampant harsh criticism from some who called Rodman part of a long line of Un’s western pawns. Now “The Worm” has turned. Get it. Rodman’s nickname is The Worm.

During a visit in 2014, Rodman took Un Trump’s book “The Art of the Deal,” which the North Korean leader read. Rodman told TMZ that Un did not really understand Trump until he read the book. “I guess he started to understand him,” Rodman said.

Now Trump is scheduled to meet with Un in few weeks or maybe sooner. Mike Pompeo, Trump’s Secretary of State, has already met with Un to discuss the meeting’s arrangements.

Who is saying Rodman deserves the Nobel Prize? RT (Russian Television) News has mentioned it.

Greg Gutfeld, editor at Fox News, who in 2014 called Rodman Un’s ‘little bitch,’ said if the summit occurs he will nominate Rodman for the Nobel Peace Prize.

Rodman, who had three nose rings and dozens of tattoos, said he wants credit for easing tensions between the U.S. and North Korea.

By Frederick H. Lowe
Special to the Trice Edney News Wire from www.NorthStarNewsToday.com