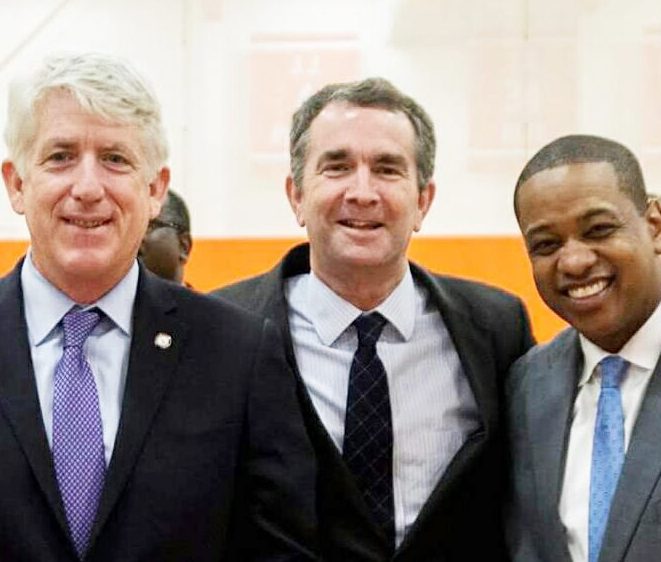 Northam, who is from Norfolk, won over the Gillespie by 54 to 45 percent. Justin Fairfax became the second African American to be elected Lt. Gov. and Mark Herring won a second term as Attorney
General.

The victory came despite a tightening of the polls statewide in the closing days of the race. But on election night Northam won the gubernatorial race by the widest margin, 9 points, the largest in 32 years. Fairfax and Herring won by 5 percentage points.

Phil Murphy’s long-expected victory in New Jersey’s gubernatorial election, upsets in Virginia’s House of Delegates races, and wins in mayoral elections from New Hampshire to Florida, the evening presented Democrats with a night to celebrate for the first time since Trump beat Hillary Clinton a year ago.

Republicans saw their 66-34 dominance in the House of Delegates shrink. The final tally will not be known for several days.

Northam won, according to political analysts, because of the erosion of the support for Republican President Donald Trump and his policies even though Gillispie kept the President at arm’s length and never campaigned with him.

But the Republican candidate tore a page from Trump’s issue play book, using Trump themes related to immigration and retaining the confederate monuments which did not set well with minorities or independent White voters.

Despite inclement weather, the Democrats won big in the northern Virginia suburbs around the nation’s capital and Hampton Roads, especially in the urban centers of Norfolk, Richmond and Portsmouth.

The Black vote was key and Northam and Democrats got 87 percent of a heavy African American voter turnout around the state.

One of the biggest stories in the House race was Democrat Danica Roems defeating Republican Bob Marshall Tuesday night, becoming the first openly transgender person to be elected and seated to a state legislature.

Another upset victory was recorded by Michael Moore, who beat incumbent Portsmouth Sheriff Bill Watson by 47 to 43 percent. In that majority Black city, Watson’s loss may have been linked to his spats with Portsmouth Councilman Mark Whitaker and last year, with former mayor Kenneth Wright.

Incumbent Portsmouth Commonwealth Attorney Stephanie Morales, a Democrat, beat T.J. Wright and Independent by 63 to 37 percent of the vote.

In Norfolk Daun Hester was elected City Treasurer, despite last minute efforts by her opponents to tie her to former Treasurer Anthony Burfoot who was indicted for various federal crimes earlier this year.

Democrat John Bell, formerly the city’s Deputy Chief of Police, was unable to beat back incumbent Sheriff Kenneth Stolle for that position.

Mayor Alan Krasnoff, a Republican, will leave that post to become the city’s next Treasurer after besting his Democratic opponent, newcomer Keith O’Brien.