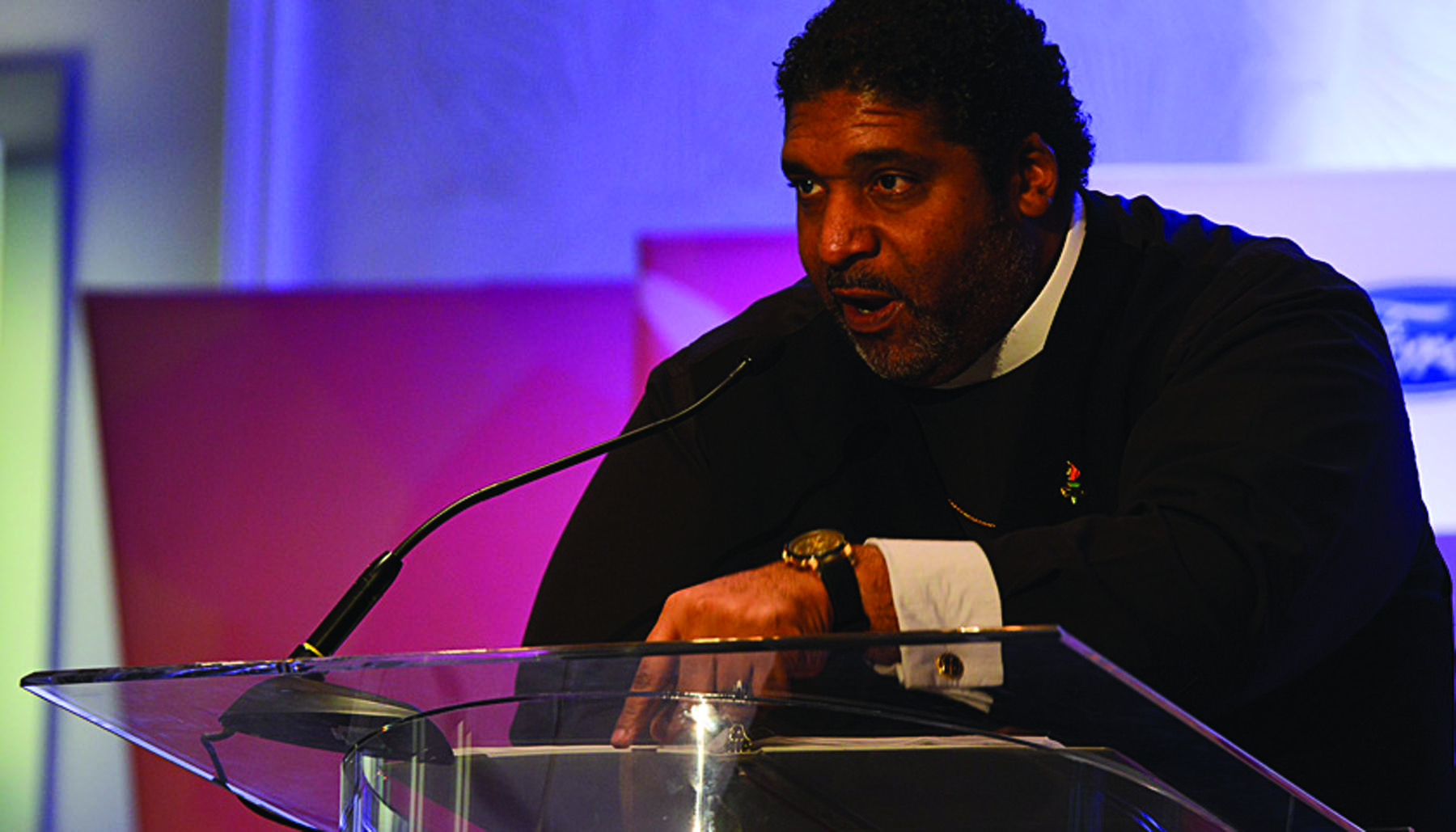 Rev. William Barber, the president of the North Carolina state chapter of the NAACP and leader of the Moral Mondays movement, delivered a rousing keynote address to open the 2017 Mid-Winter Conference of the National Newspaper Publishers Association (NNPA).

The theme of the conference was “Strengthening Black-owned Newspapers through Training, Innovation and Technology.” The NNPA partnered with General Motors, Chevrolet, Ford Motor Company, Reynolds American Inc. (RAI), and the Bill and Melinda Gates Foundation to host the conference; Volkswagen, Ascension, Coca-Cola, and the American Association for Cancer Research supported the event as sponsors.

During his speech titled, “Where Do We Go from Here: Chaos or Community?” Barber tackled voter suppression in the aftermath of Shelby v. Holder, White evangelicalism and the current political environment in the age of “alternative facts.”

Noting that President Woodrow Wilson played the White supremacist propaganda film “Birth of a Nation” in the Oval office in 1911, Barber said that Trump’s ascension and election is not an anomaly in American history.

To a chorus of “Amens,” Barber said that the one thing that we have to first decide to do in this moment is that bowing down is not an option.

Recognizing that he was addressing a room full of journalists and publishers, Barber pitched ideas for a number of articles and commentaries.

Barber said that the loss of the full protections of the Voting Rights Act and voter suppression were two of the most underreported stories during the last election cycle.

“Long before any Russian hack, the American electoral process was hacked by systemic racism and fear,” said Barber. “The Southern Strategy is alive and well.”

Barber acknowledged that civil rights leaders and Democrats could have voiced louder criticism about the lack of work done in the U.S. Congress to restore the Voting Rights Act.

“Democrats talked more about David Dukes than they did about voter suppression and the Voting Rights Act being dismantled,” said Barber.

Barber said that there were 868 fewer voting places across the nation; those closures disproportionately affected Black voters.

After delivering a brief history of fusion politics, a time when poor Whites and Blacks worked together to achieve political power in the South following the Civil War, Barber questioned why so many poor, White people today cast votes for lawmakers that oppose establishing living wage standards, better healthcare and more educational opportunities for low-income families.

The North Carolina pastor noted that there are 18.9 poor White people in the United States, about eight million more than the number of poor Black people, though Black people experience poverty at higher rates than Whites.

Barber said that exploring the real reasons why so many poor Whites vote against their own self-interest, would make for a great investigative report.

Returning to the theme that today’s political environment in America is nothing new, Barber told the story of Shadrach, Meshach and Abednego, who he described as “three millennials from the Bible days,” that liked to write and Nebuchadnezzar, “a maniacal egomaniac who loved to tweet out his own news,” loved to build towers and invited people to come to his towers to bow down.

When Nebuchadnezzar commanded that everyone bow down to his image and Shadrach, Meshach and Abednego refused, the king threatened to throw them into the furnace.

Barber said that the three young leaders had a fire in them, because they sang the songs of their ancestors.

Barber implored the publishers, journalists and activists in the room to go into the proverbial fire standing up, because help won’t come, if you go in the fire bowing down.

“If you go in the fire standing up, God can transform the fire and the same fire that was meant to destroy you, can become a fire of deliverance!” Barber shouted.

The next day at the conference, Barber committed to writing a regular guest column for the NNPA Newswire that will be distributed throughout the NNPA’s network of 211 Black-owned media properties and will reach an estimated 20 million readers in print and online.

“Somebody has to write from the perspective of crisis, even if the crisis doesn’t end immediately,” Barber explained. “Somebody has to make sure that there is a witness that [the Black Press] didn’t go along with it. So we have to do that.”