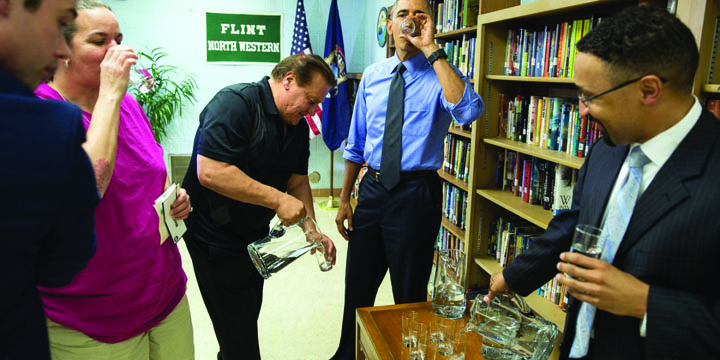 On May 4, President Barack Obama spent the whole day in Flint, Michigan. He also drank a glass of filtered water. In April 2014, the drinking water in the city of Flint was contaminated after the brilliant decision was made to change the source of Flint’s water from Detroit Water and Sewage Department water to the Flint River. General Motors stopped using water from the Flint River, after new auto parts exposed to the river water showed signs of rust.

The result was that over 10,000 children were exposed to unacceptable high levels of lead in their water. An outbreak of Legionnaires’ disease was only one of the results of the water contamination. The President was greeted by one of the people responsible for the Flint Water Crisis, Michigan Governor Rick Snyder, as he stepped off AF-1. “I will not rest, and I’m going to make sure that the leaders, at every level of government, don’t rest until every drop of water that flows to your homes is safe to drink and safe to cook with, and safe to bathe in – because that’s part of the basic responsibilities of a government in the United States of America,” President Obama said.

Many have felt like the situation in Flint has not received the level of attention that it should have from state, local and federal actors. The lack of urgency around the crisis seen in the slow reaction of Michigan’s Governor to the situation has prompted many to point out that if this crisis were taking place in a predominantly white or more affluent American city there would be more attention paid and much quicker.

In January, President Obama visited the Detroit Auto Show, but did not stop in Flint. His all day comprehensive visit on May 4 appeared to be an answer to the lack of attention Flint has received amid conversations that “the federal government can’t get involved” in local matters because it “sets the wrong precedent.” But it didn’t go unnoticed that the Obama Administration is in the midst of another foreign aid deal that would send billions in American tax money overseas, as Flint’s troubles continue. President Obama is currently in negotiations with Israel regarding an aid package that would be $10 billion more than the current 10-year pay out of aid for missile defense projects. But President Obama spoke generally of resources during his visit to Flint.

“As President, I’ve sent Flint the best resources our federal government has to support our state and local partners. The agencies that serve you – the agencies that specialize in health and housing, and those that support small businesses and our kids’ education; those that are responsible for the food that our children eat and, of course, the water we drink. Everybody is on duty. The National Guard is on duty. This is a hands-on-deck situation – all hands on deck.”

President Obama also went over the history of Flint’s situation with a wide-angle lens. “I’m not here to go through the full history of what happened. Like a lot of manufacturing towns, Flint’s economy has been taking hits for decades now – plants closing, jobs moving away. Manufacturing has shrunk. And that’s made it harder for the city to maintain city services,” President Obama said.

Obama continued: “Let’s face it, government officials at every level weren’t attentive to potential problems the way they should have been. So they start getting short-staffed, they start getting a shrinking tax base, more demand for services. Things start getting strained, and there’s not enough help from the outside. And then when Flint’s finances collapsed, an emergency manager was put in place whose mandate was primarily to cut at all costs. And then some very poor decisions were made. All these things contributed to this crisis.”

Lauren Victoria Burke is a political analyst who speaks on politics and African-American leadership. She can be contacted on twitter at @LVBurke.