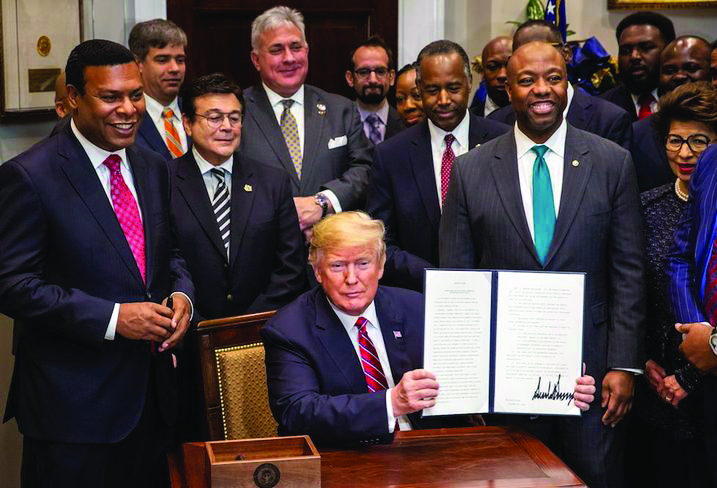 Norfolk Mayor Kenneth C. Alexander (front left) was among city leaders from across the nation attending the executive order signing on Dec. 12 at the White House of President Trump’s executive order to spend money and invest in Opportunity Zones for “distressed communities across the country.”

After almost two years, President Trump has laid out a policy with an executive order to spend money and investments in the “distressed communities across the country.” On December 12, at an executive order signing at the White House, with a majority of African-Americans in attendance, President Trump said, “this order would draw investment into neglected and underserved communities in America.”

With a sea of Black faces, starting with Billionaire Bob Johnson, Senator Tim Scott of South Carolina and United States Secretary of Housing and Urban Development, Ben Carson, [President Trump] has assured the mainstream media that this is one of the solutions to fix the numerous economic problems in urban America. Under the leadership and direction of Secretary Ben Carson, 13 federal agencies have already put together a list of 8,761 potential designated action zones.

“The White House’s new executive order for agencies to prioritize OZs is a positive first step to transform more communities into walkable, equitable, and thriving places and repair the mistakes of the 20th century that led to sprawl and disinvestment,” said Christopher Cotes, Director of LOCUS, a program of Small Growth America. “Most importantly, this new council must encourage greater transparency to ensure any federal investment in OZs achieves equitable development outcomes that are good for both residents and businesses.”

On paper, “Opportunity Zones” appears to be an excellent concept and major corporations have an opportunity to invest in distressed communities and get a break on their taxes. These Opportunity Zones were created a year ago under the 2017 Tax Cuts and Jobs Act, but a year later there are still no established rules to implement the program.

All 50 states, the District of Columbia, and five U.S. territories are able to participate in the Opportunity Zones initiative. State governors are responsible for nominating low-income communities based on qualified census tracts, and the U.S. Department of the Treasury will certify Opportunity Zones within 30 days of receiving nominations.

Presently, the major question is how will the African-American community benefit from Opportunity Zones?

To begin, very few African-Americans are aware of or have information about Opportunity Zones, and many consumer advocates warn that the investments may not reach distressed areas. Many of these projects will be a public-private-partnership, and many companies refuse to invest money in a poor community, where they don’t see them getting a return on their investment.

But, at the executive order signing, different prominent Blacks spoke in favor of the project. Pastor Donte’ Hickman of the Southern Baptist Church and in partnership with other faith-based stakeholders’ institutions, has created the East Baltimore Revitalization Plan, addressing development needs of 100 acres, approved and adapted by the City Planning Development of Baltimore.

“Our area has been federally-designated as an Opportunity Zone, and this bipartisan legislation can leverage public and private funding toward community revitalization,” says Pastor Hickman. After Pastor Hickman give his remarks, Billionaire Bob Johnson of BET spoke.

Mr. Johnson is also a big supporter of Opportunity Zones. “What this proves is the efficacy, Mr. President, of a program that allows capital to flow to places where people are seeking out opportunity. And I am convinced that this program, where the tax incentives out of the Treasury Department to business people, will cause people to invest money where before they saw risk, now they see opportunity,” says Bob Johnson of BET.

It is too early to make an informed opinion on this Opportunity Zone project. There are different numbers from different leaders to the amount of money the government is willing to invest. Some say $1.3 billion and others say $2.2 billion, but both numbers are substantial.