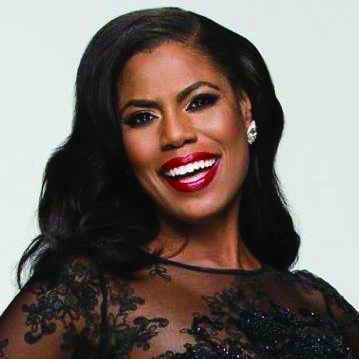 Omarosa Manigault-Newman will release her new book on Aug. 14.
The book is titled “Unhinged: An Insider’s Account of the Trump White House”. According to CNN, comments from her publisher suggest that it not a positive book about President Donald Trump.
According to a press release from Gallery Books, “Their relationship has spanned fifteen years—through four television shows, a presidential campaign, and a year by his side in the most chaotic, outrageous White House in history. But that relationship has come to a decisive and definitive end, and Omarosa is finally ready to share her side of the story in this explosive, jaw-dropping account.”
She resigned from her position as White House communications director in December. During her time on the job, she worked as Trump’s chief adviser on African-American issues.
Joining the cast of Celebrity Big Brother in February, she told cast members, “I’m thinking of writing a tell-all sometime. He’s going to come after me with everything he has,” she said, referring to Trump. “Like, I’m going up against a kazillionaire. So I’ll probably end up in court for the next … but I have to tell my truth. I’m tired of being muted.She added, “I have been so loyal to the point where people are like looking at me like something is wrong.” Exiting the White House, she said, made her feel like she had “been emancipated” from a “plantation.”
Asked if she would vote for Trump again, Manigault Newman said on the season premiere of Celebrity Big Brother, “God no. Never. Not in a million years, never.”
The administration has tried to minimize Manigault-Newman’s role: “Omarosa was fired three times on The Apprentice, and this was the fourth time we let her go,” spokesman Raj Shah said after she called the White House situation “bad” during an appearance on Big Brother. “She had limited contact with the President while here. She has no contact now.”
She was a contestant on the first season of the Trump-hosted The Apprentice in 2004 and appeared in two subsequent seasons. She also appeared on The Celebrity Apprentice.
Born in Ohio in 1974, she holds a1996 degree from Central State University and a master’s degree from Howard University. In the 1990s, she worked in the office of Vice President Al Gore. In December 2016, Omarosa was announced as one of the nine members to President-elect Donald Trump’s transition team.