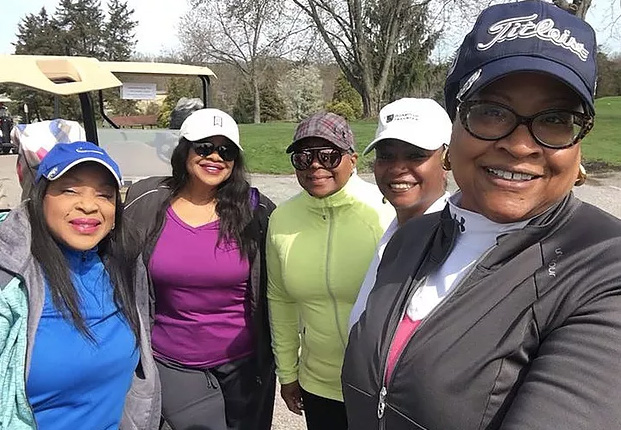 On Saturday, April 21, 2018, I woke up excited, anticipating a round of golf at Grandview Golf Club in York, Pa. I was going to play with four ladies from “Sisters in the Fairway” (SITF), a group of about 15 professional, predominantly African-American women in York County, Pa., who golf.

SITF are women of various levels of expertise from beginner to advanced golfers. The group was formed in 2008 as a sisterhood of ladies who golfed with their husbands, many of whom were members of the York County Black Golfers Association.

We appreciate the challenge that golf presents and the control that golf requires. Golf lessons are required. We know and respect golf etiquette and rules.

As a single mother, I prioritized raising two children, building my business and working in the community. In 2010, when my youngest child left for college, she suggested I “get some friends.” So, as an empty-nester, I took her suggestion. I was introduced to the ladies of SITF.

I began playing around 2011-2012 and found that I loved the game. SITF normally travels to different courses throughout Central Pennsylvania in each outing. Some also play in other states and in other countries, when they travel. As individuals, we occasionally played at Grandview, which was now under new ownership.

On this day, there was a slight wind and I took selfies on my way to the golf course. All five of us appeared at our scheduled tee times. I was given permission to play as a fifth member.

We were the only group of African-American women playing. It began great, even though Grandview had an hour delay. We did not complain. We were elated to see each other since we had not all been together since the past season. We took selfies, as we anticipated anticipating enjoying each other’s company, the day, and golf.

We hit great drives “hitting them high and letting them fly.” We played “ready golf.” We were excited.

Our excitement did not last. On just the second hole, former York County Commissioner Steve Chronister was pushy and aggressive, falsely accusing us of slowing down the other players. He said he was refunding our membership, so we would leave. We reminded him that we paid and wanted to play.

Our group was in shock. Despite the distractions, we made up time and finished the first half in about two hours as required.

But the stress was too much. Our game was affected. We were upset – wondering whether Chronister was going to approach us again and dismayed that he wanted to refund our memberships, as though we and our money were worthless – so three women in our group left halfway through the game.

When we, the remaining two, tried to continue playing to salvage the day, five large White men, including Steve and his son, Jordan Chronister, approached us and told us to get off their property. I became tongue-tied trying to ask why they were kicking us off the property when we had a paid membership and also paid for the day. They gave us multiple reasons, each one proving to be false.

Because we questioned why we could not enjoy our membership and play golf, the police were called. I was bewildered. We had done nothing wrong. I was also embarrassed and humiliated having been made into a spectacle as White men exited the golf restaurant area and watched the events unfold.

We waited for the police. I was fearful and apprehensive as to what would occur when police arrived. What would be the officer’s attitude?

But I did not want to leave and have charges filed against me in the mail, because Grandview gave a false statement that I had no opportunity to answer.

When police arrived, they heard my name and recognized me. The police were professional and went back and forth between Grandview Golf Club and us, advising us that Grandview wanted to refund the memberships of the entire group, even those who left early.

The officers interviewed the group behind us and concluded that we were not playing slowly and maintained pace, even with five people. The group told the police we did not hold them up, and were pleasant to them. It was obvious that the police were called, because of Grandview’s owners reaction to the us, and not because the group behind us had complained.

A few days after the incident, I was still anxious, because I did not know if they were going to file charges. I knew charges could be sent in the mail. It was not until the police chief issued a statement that no charges were warranted could I sigh in relief. Nevertheless, I developed headaches for a few days.

But, who cares about my titles?

Everyone who pays their fee should be allowed to play golf, if they desire, without interruption, without false accusations, without intimidation, and without the threat of police, especially when they have committed no crime or disruption.

I kept wondering whether the police were professional, because they knew me and what would have occurred had they not known me. While we waited, I texted the other three ladies who had left. I let them know that the police were called, and they became so upset they wanted to return for fear of what could happen. With the long history of how police interact with African-Americans, businesses know, or should know, that when they call the police they are inviting them to arrest the person, which could also lead to injury or death.

This situation was not as bad as the recent arrest of two Black men at a Starbucks in Philadelphia, because we were not arrested nor was it as bad as the incident involving a 25-year-old Black woman at a Waffle House in Saraland, Ala., because police did not assault us. However, it is similar to them in that businesses are using the police as their personal complaint department and as enforcers without repercussion or accountability.

Police must turn away once they learn that the matter is not criminal, but civil. Law enforcement policies and practices must change. Police must enforce laws against these businesses and their owners who file false complaints. Legislators must act to hold businesses accountable. Patrons and the community must stand up in the midst of these situations, instead of being passive observers or actively trying to concoct legitimate reasons for the mistreatment of Black patrons, when they are nonexistent. See something, say something. I commend the men who publicly spoke out for us. I am thankful for the public outcry of support.

We, as African-Americans, just want to live.

Some wanted a place to meet, others wanted utensils for their meal, others wanted to exercise, and we simply wanted to golf. We demand the freedom to frequent businesses, to use services, to ask questions, and, yes, to even complain without the fear of being arrested, beaten or shot. The irrational fears of some White people should not be our problem and should not interfere with our quality of life. We will not stand idle or remain silent while our freedoms and lives are devalued and threatened.

Despite the attempted movement to take us back to a time of second-class citizenry, we will not return. We will maintain the shout, “Forward Ever, Backward Never!” for ourselves and our brethren of other races, colors, nationalities, religion and of other protected classes. Only together will we make positive change.