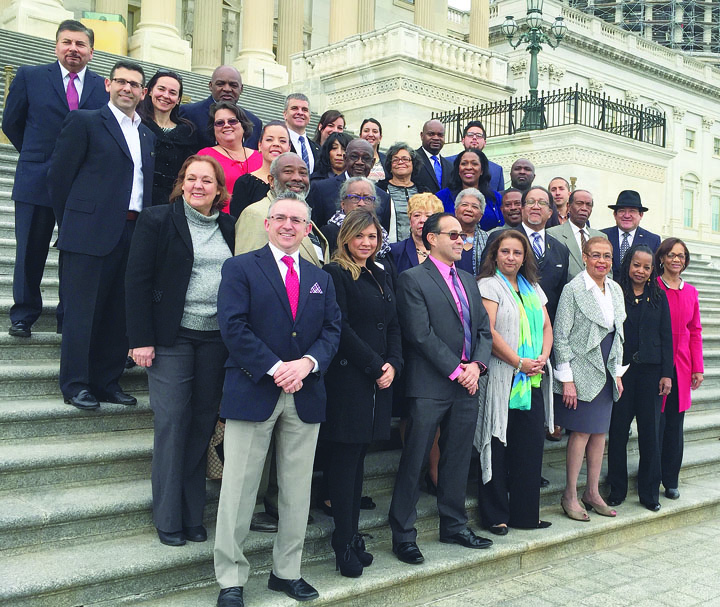 (TriceEdneyWire.com)
The federal government, through its various agencies, spends considerable sums of money every year on advertising and representatives from two prominent newspaper organizations are pushing to find out exactly how much of these dollars flow to Hispanic and Black newspapers.

Leaders of the National Association of Hispanic Publications (NAHP) and the National Newspaper Publishers Association (NNPA) are convinced that federal agencies aren’t fulfilling their mandate to direct advertising dollars to their member newspapers and businesses. An investigation, they assert, will provide concrete evidence of their suspicions and allow them to push hard for their fair share.
Congresswoman Eleanor Holmes Norton (D-DC) held a press conference on the front steps of the US Capitol announcing that she would call for an investigation by the Government Accounting Office (GAO).

She said she wasn’t aware of this issue until it was brought to her attention by a group of representatives from both organizations which worked out the terms of a strategic alliance prior to the press conference.
“I’m requesting a report from an objective arm of the federal government, the GAO. We’re asking them to conduct a study of the federal agencies whose outreach is to people of color,” said Norton on Friday, March 11.

“We don’t want our federal agencies to forego their mandate and responsibilities. There is a mandate to engage small businesses. We want to discuss if that is, in fact, taking place. There’s no more authentic or trusted way to do so than to engage the Black and Hispanic press.”
Norton and other publishers said no one can accurately pinpoint a dollar figure of what the federal government spends.
“We have no sense of the numbers,” Norton explained. “If you don’t even know what they do, you can’t know what they spend. We want to know how much they spend and with which press. We don’t even know if they (the federal government) have a strategy.”

Despite this blind spot, Norton and several other speakers estimate that the federal government spends billions in advertising each year with little of that reaching Hispanic and Black media outlets or advertising agencies.
The implications of securing additional ad revenue is clear. According to the Pew Research Center’s State of the News Media 2013, “the story about how African-American-oriented news media coped … was a difficult one at best.”

Many historic African-American-owned publications both lost circulation and struggled to find advertising revenue, the report’s authors said. On top of circulation challenges, declining advertising revenue is a problem for every African-American newspaper examined. Decreased revenue has caused many publications to cut staff and reduce publication schedules.
“We’ve been saying it and writing about this. We’ve done all we can to this point. What the report is going to show is an outrageous disparity affecting all our publications,” said Denise Rolark Barnes, NNPA Chair and publisher of the Washington Informer. “Our organizations have a combined readership of 40 million people. We want to do and continue to carry out our mission and I think this report will make a great difference for us.”

NAHP Vice President Martha Montoya faults Black and Hispanic newspapers for not staying on top of the issue and demanding both accountability and constant feedback on a matter so crucial.
“Then-Sen. John Kerry had a meeting in 2006 and requested a report. The only three agencies on the list were NASA, the Department of Defense and one other,” Montoya, publisher of El Mundo in Seattle, Washington, recalled. “We have to also blame ourselves because we should have demanded the report every year. It should be standard compliance because it’s data everybody needs.”

Norton said it’s also unclear how long it will take for the GAO to complete the report, saying that the NAHP/NNPA request will join the queue. During a subsequent meeting in the Cannon House Building with Congressional staffers, the Rev. Benjamin Chavis informed publishers and staff that U. S. Reps. Charles Rangel (D-N.Y.), Barbara Lee (D-Calif.) and Congressional Black Caucus Chair G.K. Butterfield had joined Norton calling for the GAO investigation.

This joint initiative seeking answers from the federal government is the result of the coming together by both parties. The NNPA represents 205 African-American-owned community newspapers nationally, and NAHP, also a non-partisan trade advocacy organization, represents America’s largest Spanish language publications. Both have a combined reach of 43 million readers each week across the United States.

“With close to 97 million African-Americans and Hispanics in the US today – representing 33 percent of the total population – this consumer segment demands attention,” Montoya said. “The buying power of the African-American and Hispanic communities, currently at more than $2.3 trillion combined, continues to outpace the national average.”
Chavis, NNPA president and CEO, hailed what he characterized as a monumental partnership.

“This historic media alliance is a gigantic step for our two organizations,” he said. “We believe our working together has tremendous potential mutual benefits in today’s marketplace. We are grateful that Congresswoman Norton will ask the GAO to conduct timely research and to issue a report on advertising contracting and subcontracting with African-American and Hispanic American-owned newspapers and media companies by all federal agencies. We salute and appreciate her leadership and service to our communities.”
Chavis said he looks forward to seeing what the report produces.

“Calling for the report is itself hugely significant because the call presupposes that there are legitimate questions that need to be raised,” he said. “The federal government should practice what it preaches. We have very lofty language about freedom and equality. The GAO report will put facts on the table. We expect to see inequities, unfairness and wide disparities in how the government procures and does business with businesses, large and small, majority and minority owned.”