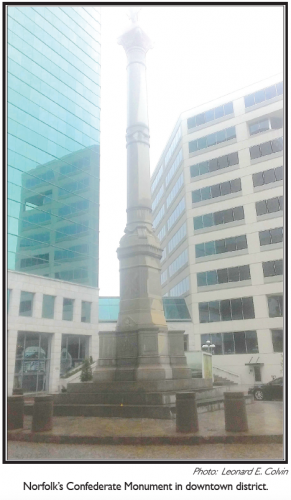 Twenty months ago the city of Norfolk approved a resolution to move its downtown Confederate Monument to Elmwood Cemetery “as soon as the governing state law clearly permits it.”

A state code forbade the city from moving the monument without the state’s permission, if it was built on public lands and if the city was not obligated to any deed restricting its removal by a group or individual.

It seems the city, thanks to a suit filed by two activists serving as their own attorney, had that pathway laid before it last week.

As a result of a Circuit Court hearing on April 4, the Norfolk City Attorney will file a challenge to the law in state court.

According to Norfolk City Attorney Bernard Pishko, the crux of the city’s challenge will be threefold: state law denying the city its freedom of speech; the U.S. Constitution; and a ruling established in the Danville court, Pishko said the state law violates the United States Constitution and the 1st Amendment’s freedom of speech clause because the restriction is based on the content of the monument. He said it also violates the 5th Amendment because it deprives the city of the right to use its property how it wants.

Pishko said because Norfolk’s Confederate statue “has an expression,” it is saying something; thus, “it is speech.”

The Perry-Bey/Green suit, filed by activists Roy Perry-Bey and Ronald Green, points out the “expression” concept.

“The city painted itself into a corner, with all of its excuses and delay tactics used to keep that confederate monument standing,” Roy Perry-Bey told the GUIDE.

The 80-foot structure was constructed on East Main Street in 1899 at Commercials Place (once known as Markets Square) at the height of the retrenchment period designed to dismantle political gains made by Blacks after the Civil War.

Starting in 1889, the city, which donated the land, and the Daughters of the Confederacy, after ten years, had raised the funds to erect the monument. The original structure did not include the statue called the “Standard Bearer.”

That statue was placed atop it in 1907. It was later named “Johnny Reb,” and sits atop the monument now.

Two years later, the state legislature imposed a law requiring locales, especially counties, to get permission from the state before it could remove monuments dedicated to people who died in battle, including the Civil War.

Norfolk built its monument on land at Commercial Place (Market Square) which was, during the era of slavery, a multiple block complex of government and privately owned buildings downtown.

Captured slaves were jailed, auctioned off and placed on ships waiting in the Norfolk harbor bound for various destination southward.

Many southern cities built such monuments at the site of their old slave market areas.

There were several efforts, especially in the 1950s to remove Norfolk’s Confederate Monument after it was finally completed, but the Daughters of the Confederacy fought against it.

It was removed from its original site in 1965. The city was readying land to construct the Virginia National Bank Building, which later housed Bank of America and now is the Icon Apartments.

The base of the monument was placed in city storage. The “Standard Bearer”, which was not placed on the original structure in 1899, was placed in front of the Chrysler Museum. In 1971, the monument was re-erected at its current spot. Renamed “Johnny Reb” the statue of the Confederate soldier carrying the flag was placed back on top of it.

In a court hearing in Danville in 2015, the judge ruled that any monument erected in a Virginia city before 1898 was not protected by the law passed in 1904. That is when the state imposed its law that counties had to secure permission to remove any monuments. In 1997, the state legislators expanded the law to include cities.

The Virginia Supreme Court declined to review the Danville court’s ruling, so it stood.

The Danville case and the Norfolk resolution were prompted by the Charlottesville White Supremacist protest march “Unite The Right” in August 2017.

During that event, activist Heather Heyer was killed when she was struck by a car by a White Supremacist who has been tried and sentenced for murder.

Norfolk joined other cities and locales around Virginia, which has been called the “cradle of the Confederacy,” to move their most well-known monuments.

Perry-Bey has led several demonstrations at the base of the Norfolk Monument, calling for it and others in the region to be removed.

Perry-Bey has filed petitions with the city council demanding the removal of the monument as far back as 2015.

On March 24, 2019, activists Roy Perry-Bey and Ronald Green filed a suit to impose an injunction to force the city to move forward on relocating the monument. It claimed the city was deliberately delaying its August 2017 Resolution.

Perry-Bey/Green Vs. the city of Norfolk also challenges the state’s statute barring cities from taking down such structures.

Since Norfolk owns the Confederate Monument, according to the suit, “The only restrictions on local governments’ removal that are applicable to the pre-1997 law, to protect the monuments are those found within the original grants of authority, those imposed by localities on themselves or deeds associated (with an individual or group) and not the Virginia code.

“Further, the old code restricted the removal imposed on Norfolk as a county seat, a fact that has not existed, since 1846 when it became an independent city.

According to the suit, the state code now “does not apply to any monuments or memorials constructed prior to 1904 when lawmakers said that locales must get permission from the state to remove such structures.

Further, the suit cites that Attorney General Mark R. Herring issued an advisory opinion that “cities can remove or relocate Confederate monuments as long as there are no individual laws or restrictions governing those particular monuments.”

Herring’s opinion, Perry-Bey and Green said, provided them with the legal avenue and weapon they needed to force the city to pursue legal action to remove “Johnny Reb.”

If the Perry-Bey/Green suit plays out and the city attorney is successful, Norfolk, in accordance to the August 2017 resolution passed by city council, will move the Confederate Monument to Elmwood Cemetery.

Pishko said his office will file its claim in the next several weeks.

Circuit Court Judge Mary Jane Hall will hear arguments on April 29 on a mandatory or preliminary injuction in the law suit.