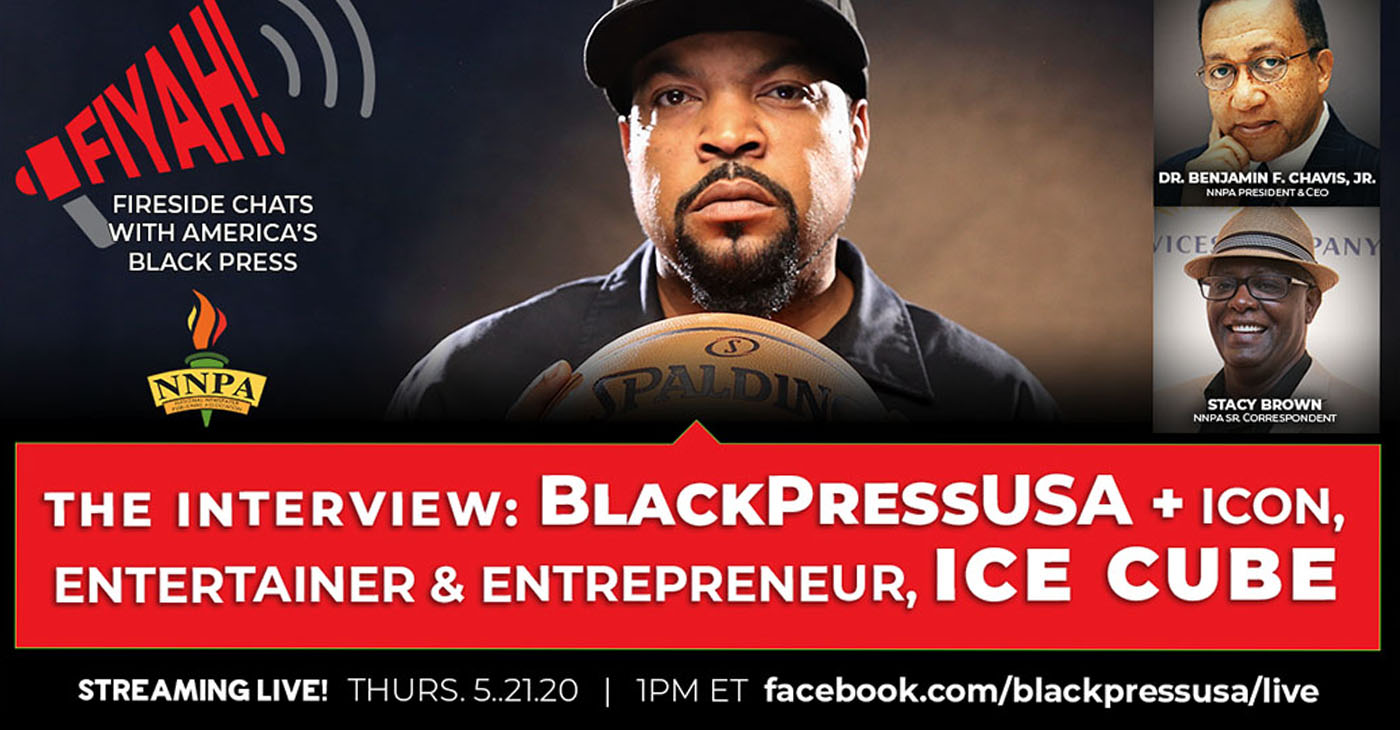 Like very few others, Ice Cube is celebrated for his groundbreaking accomplishments in music, film, sports and entrepreneurship.

The legendary South-Central Los Angeles-born megastar is currently celebrating the 30th anniversary of his debut solo album, Amerikka’s Most Wanted, and the release of his 31st feature film, The High Note, which stars Cube, Tracee Ellis Ross and Dakota Johnson.

On Thursday, May 21, Cube sat for an exclusive interview with the National Newspaper Publishers Association (NNPA). The discussion was broadcast live on Facebook and YouTube (facebook.com/blackpressusa/live and youtube.com/nnpa) and archived to various platforms, including Facebook, YouTube, and Vimeo.com.

“The NNPA is pleased excited to do this live stream with our Brother Leader Ice Cube on behalf of the Black Press of America,” said Benjamin F. Chavis, Jr., NNPA president and CEO. “Cube continues to spit truth to power in his lyrics, videos, music and the genius of his creative talent and high energy. In addition to learning more about his latest project, our discussion is especially important in light of the devastating COVID-19 pandemic and the increased racial tension between African Americans and the police.”

“Thirty years ago, Ice Cube dropped his debut solo album, Amerikkka’s Most Wanted. After leaving N.W.A., he became an instant solo star, and his first video for Who’s the Mack, even takes a shot at Trump,” noted Andrew Barber, the founder of the influential music blog, Fake Shore Drive, in a tweet this week. “A true visionary and trendsetter.”

Born in 1969, Cube’s rise to superstardom began in the 1980s as a member of the group, N.W.A., which featured Dr. Dre, Eazy-E, DJ Yella, and MC Ren. As young visionaries, N.W.A. took the music world by storms with cutting and hard-hitting lyrics that included the 1988 blockbuster, Straight Outta Compton, which sold north of 3 million copies.

One of N.W.A.’s most successful and controversial singles, F… tha Police, delved into the divide between young Black men and law enforcement. A divide that has evolved into a chasm with police shootings of unarmed African Americans occurring almost daily.

When asked in a recent interview about the song, Cube reiterated why he and his bandmates believed the song was important in 1988, and why it still resonates today.

“At the time, Daryl Gates, who was the chief of police over at the LAPD, had declared a war on gangs. A war on gangs, to me, is a politically correct word to say a war on anybody you think is a gang member,” Cube told the website, Colorlines.

“So, the way we dressed and the way we looked and where we come from, you can mistake any kid for a gang member. Any good kid. Some of them dress like gangbangers, and they go to school every day because that’s the fashion in the neighborhood,” Cube stated.

“So, to declare that, it meant a war on every black kid with a baseball hat on, with a T-shirt on, some jeans and some tennis shoes. So, it was just too much to bear, to be under that kind of occupying force, who was abusive. It’s just; enough is enough. Our music was our only weapon. Nonviolent protest.”

After his debut solo album, Cube took the big screen by storm with a stirring performance in John Singleton’s 1992 movie, Boyz n the Hood.

Cube has established a long-standing reputation for developing film franchises that are both critically-acclaimed and commercially successful, including Barbershop, Friday, Ride-A-Long, and Are We There, Yet?

“I keep the fire in me,” Cube has said. “You gotta be able to survive in whatever environment you find yourself. The ‘hood means everything to me. You never know when you could wind up back there.”