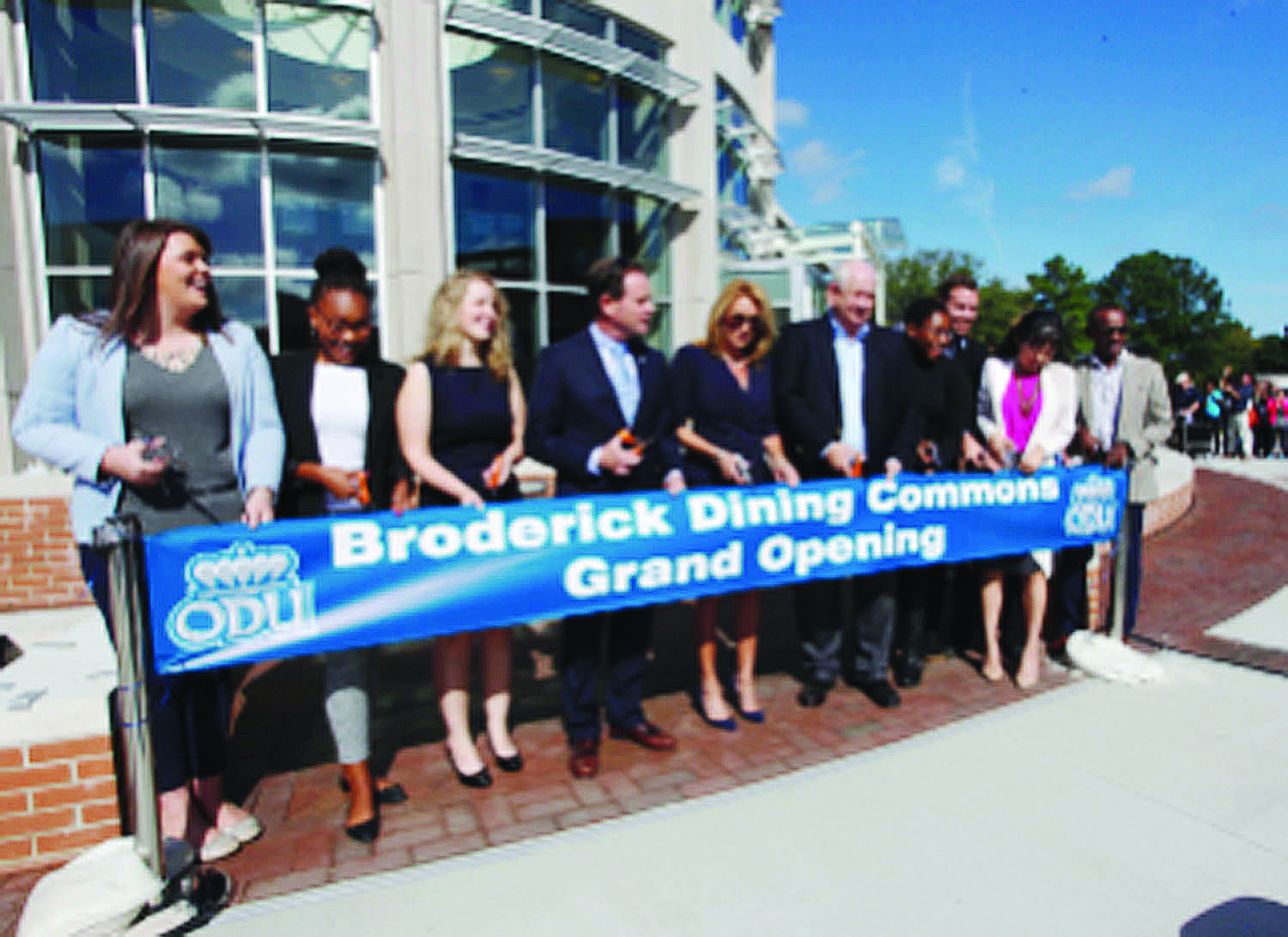 Event emcee Ted Alexander barely had time to remark at the end of a brief ribbon cutting ceremony that the Kate and John R. Broderick Dining Commons was open when a wave of hungry Monarchs flooded through the rotunda door. “I guess we didn’t need to point out where the entrance is,” Alexander joked. And with that, Old Dominion University embarked on the next chapter in its history and set a new standard in campus cuisine.

“I think you’re in for a real treat today,” Chief Operating Officer David F. Harnage told those who gathered for the ribbon-cutting ceremony. “This building is a model for American universities in the coming decades, and a top-of-the-line dining experience for all of you.” Also during the brief ceremony, President Broderick stressed his hope that the dining commons serves as a place of fellowship and connectedness for students.

“We hope that not only is this a place where good food is shared, but better understanding of each other is gained, and friendships are made,” he said. The crowd of several hundred students who made their first foray into the University’s first stand-alone dining facility will have plenty of time for fellowship in the days and weeks ahead. On this day, however, the enthusiastic crowd seemed focused on exploring the diverse array of food choices available in the 39,000 square foot, all-you-can-eat facility.

“I remember seeing the construction last year and saying to myself, ‘I wish it was open right now,’” said Nia Williams, a sophomore dental hygiene student sitting at a long table with several friends. “I can’t believe it’s open. I’m so excited.” Terence Brooks didn’t get in a line for food right away. Instead, he took a 360-degree video with his cell phone as the crowd moved through the brightly lit seating area with a soundtrack of songs played at Old Dominion basketball games booming through loudspeakers.

“This is amazing. And I haven’t even eaten yet,” said Brooks, a junior park, recreation and tourism major. During the grand opening, the Brodericks and senior University administrators donned white chef coats to mill about among the crowd handing out cupcakes and cookies. COO Harnage took a turn behind the grill, cooking bratwurst and chicken and beef for skewers.
The dining commons was named to honor Old Dominion’s first family in response to an effort by student leaders to recognize the Brodericks’ commitment to diversity and inclusiveness, as well as their compassion for students, staff and faculty of the University community. Simple thank you’s don’t compare to the gratitude and awe we feel in our hearts for this recognition,” Kate Broderick told the crowd. “We are truly touched.”