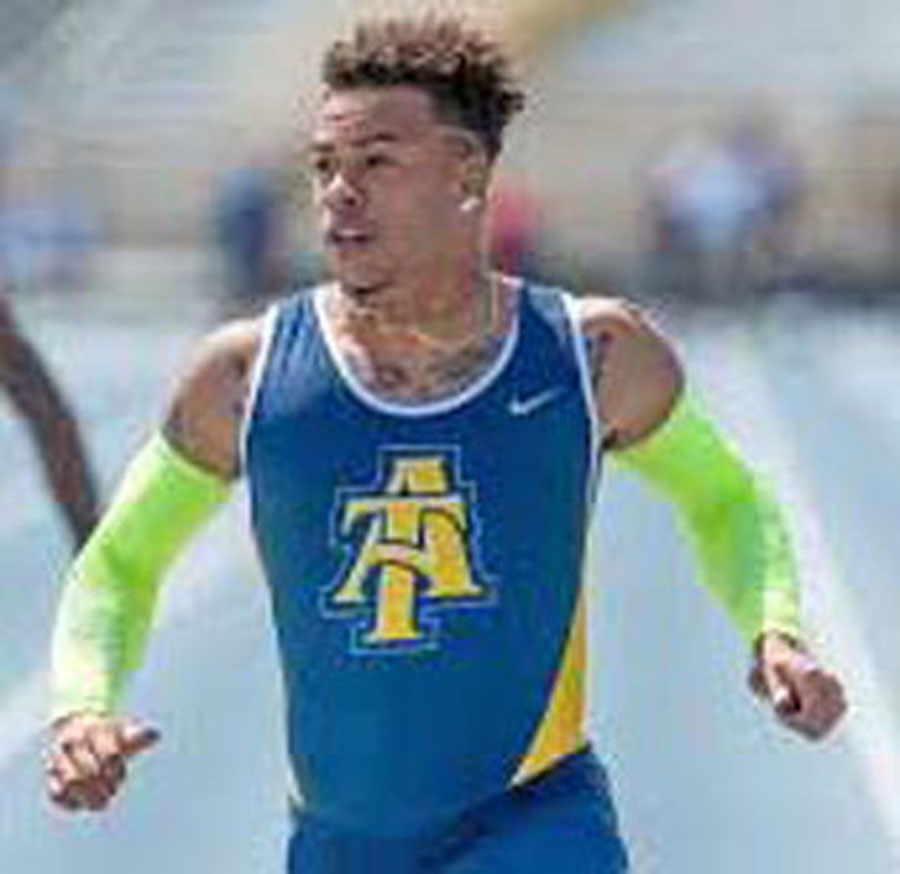 When he came out for the final, the A&T was gone, and he was uniformed completely in Nike. Belcher, who had one more year of eligibility for indoor track and field at A&T, signed a professional contract with Nike on Friday, thereby ending his collegiate career as an Aggie.

The good news didn’t stop there, Belcher also finished third in the U.S. 100 meter final to earn a prestigious spot on the United States Track and Field team along with Olympian Justin Gatlin and NCAA 100-meter champion Christian Coleman out of the University of Tennessee.

Belcher, who has developed into one of the best sprinters in the world, continued that ascent on Friday through two qualifying races that made him a member of the U.S. national team. There were two semifinal 100 meter heats. To make Friday’s final, Belcher needed to finish in the top-4 of his heat. To make the U.S. team he needed to place in the top-3.

With interlocking A&T logo across his chest, Belcher placed fourth in his heat and eighth overall with a time of 10.22 narrowly making the final. It was close to his slowest time of the season, nearly matching the 10.24 he ran on April 8.

“He had a bad race,” said North Carolina A&T director of track and field programs Duane Ross who will continue to train Belcher as a pro. Ross said he simply told his star sprinter to fix it. Belcher not only fixed his technique, he changed uniforms.

In the two hours between races, Belcher signed with Nike to make the obvious official, he was not going to return to A&T for his final year of indoor track and field. In his new Nike outfit, Belcher ran a 10.06 to finish third behind Coleman’s 9.98 and Gatlin’s 9.95 in the final. The trio will represent the US in London, Aug. 4-13 at the IAAF World Championships in the 100 meters and 4×100 meter relay.

“We knew it was coming,” said Ross about Belcher signing with Nike. “He is going to have a nice career. He is still going to train in Greensboro, and he is going to finish school, so this is an exciting time for him, for our program and for the entire North Carolina A&T University family. Chris is a prime example of coming in, doing what is asked of you and working
hard until you see the types of results you want to see. You still have to work hard. It’s not only about talent.”

Belcher told the Greensboro (N.C.) News & Record Saturday that in the six weeks before the World Championships he is scheduled to run in the London Diamond League meet on July 9. A week later he runs at a meet in Moscow where world record-holder Usain Bolt is expected. He then goes to Belgium for relay camp.

Belcher turned a lot of eyes when he ran a wind-aided 9.99 at N.C. A&T’s Irwin Belk Track on April 15. He carried that over to the MEAC outdoor championships in May when he won three conference gold medals in the 100 meters, 200 meters and 4×100 relay to help the N.C. A&T men’s track and field team win their first conference title in 21 years. A month later, Belcher clocked a 9.93 in a semifinal heat at the NCAA championships in Eugene, Ore., to become a first-team All-American. His 9.93 is still the third-fastest time in the world this year.

Belcher also earned first-team All-America honors in the 200 meters and 4×100. The 20.01 he ran at the NCAA championships is the sixth fastest time in the world in the 200 meters this year. The 38.48 ran by Belcher and his 4×100 teammates at the NCAA championships (semi final heat) is the eighth-fastest time in the world this year.