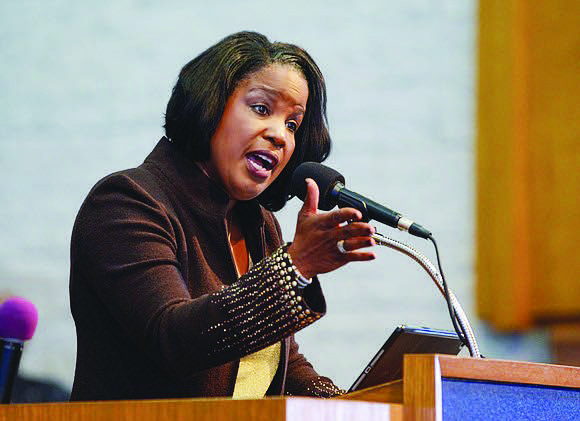 “We pray, we labor and we wait, as we witness turmoil, turnover, chaos and controversy over the past year that has been promulgated from the highest office of the land through a series of irrational and irate daily tweets that systematically seem to try to roll back the clock on civil rights gains in an attempt to take us back to the good old days, or as some may say, to make America great again,” she said.

But during the New Year’s Day event sponsored by the Baptist Ministers’ Conference of Richmond and Vicinity, Brock encouraged the roughly 300 people in attendance to keep fighting injustice.The Virginia Union University graduate, who also earned a master’s in divinity from VUU’s Samuel DeWitt Proctor School of Theology, drew parallels between Jesus’ teachings in the Bible to issues confronting the nation today, such as health care and immigration.

“Too many of us are locked in a room with the door wide open. Too many faith leaders and church folks remain silent about what Jesus talked so much about,” Ms. Brock said. “We need you to stand with us when we welcome the stranger, stand with our Muslim brothers and sisters with the travel ban or with Dreamers on immigration reform.”

Emancipation Proclamation Day celebrates Jan. 1, 1863, when the proclamation signed by President Abraham Lincoln went into effect abolishing slavery in Virginia and other Confederate states. The event is a New Year’s Day tradition to celebrate progress and encourage people to continue the fight for freedom, according to the Rev. Emanuel Harris, vice president of the ministers’ conference.

“Our work is great,” Rev. Harris told the crowd. “Injustice still exists. The fight continues. Stay engaged. The same God that liberated back then is liberating today.”

Emphasizing that point, Ms. Brock shared the story of Elmore Nickleberry, a sanitation worker in Memphis for more than 60 years. He was one of the workers who went on strike in 1968 to demand fair wages and safe working conditions when Dr. Martin Luther King Jr. traveled to Memphis to support the workers and was assassinated.

Nickleberry, now in his 80s, still works a sanitation route, according to published reports, because he never received a promised pension from the city of Memphis. Recently, the city granted the original striking workers a $70,000 pension payment, Brock said. During the service, the crowd joined hands to pray in a gesture of strength and unity similar to those who linked arms as they marched for civil rights. The Rev. Charles Baugham, interim pastor of St. Mark Baptist Church in Goochland, prayed, “God, we need your presence and your activity as we engage in issues and challenges of our time.”

“These are times that try men’s souls. We have been on the battlefield, but more than ever we need to be on the battlefield,” added the Rev. Delores L. McQuinn, who represents portions of Richmond, Henrico and Chesterfield in the Virginia House of Delegates. “There are no ‘many sides’ for people to stand on when you’re discriminating, when there’s prejudice and hate and racism,” she said, referencing President Trump’s comments following the violent protest of white nationalists and neo-Nazis in Charlottesville in mid-August.

Emancipation Day is celebrated in cities across the U. S. But the event was of particular significance in Richmond, the former capital of the Confederacy.

Brock referenced a letter from former slave and abolitionist Frederick Douglass to newspaperman and abolitionist William Lloyd Garrison, written Jan. 1, 1846. In the letter Douglass wrote, “In thinking of America, I sometimes find myself admiring her bright blue sky, her grand old woods, her fertile fields, her beautiful rivers, her mighty lakes and star-crowned mountains. But my rapture is soon checked, my joy is soon turned to mourning when I remember that all is cursed with the infernal spirit of slaveholding, robbery and wrong.”

“I am filled with unutterable loathing,” Douglass continued, “and led to reproach myself that anything could fall from my lips in praise of such a land. America will not allow her children to love her. She seems bent on compelling those who would be her warmest friends to be her worst enemies. May God give her repentance before it is too late, is the ardent prayer of my heart. I will continue to pray, labor and wait, believing that she cannot always be insensible to the dictates of justice, or deaf to the voice of humanity.”

Brock said these leaders from the past were different from some of today. “These clarion leaders, who with fire in their belly for justice, stood flat-footed with an ancestral mandate to speak truth to power,” she said. “They were not like some of our wannabe justice, faith and community leaders who simply rush out to our communities for drive-by social justice faith tours.

She talked about the biblical passage in Thessalonians describing convictions of steel. “We need some leaders who have some steel in their convictions,” Brock said.“What happens to us that we get so absorbed in our own places and houses of worship that we forget that we are to enter to worship but depart to serve?” she asked.“Service to others is the rent we pay for the space we own.”