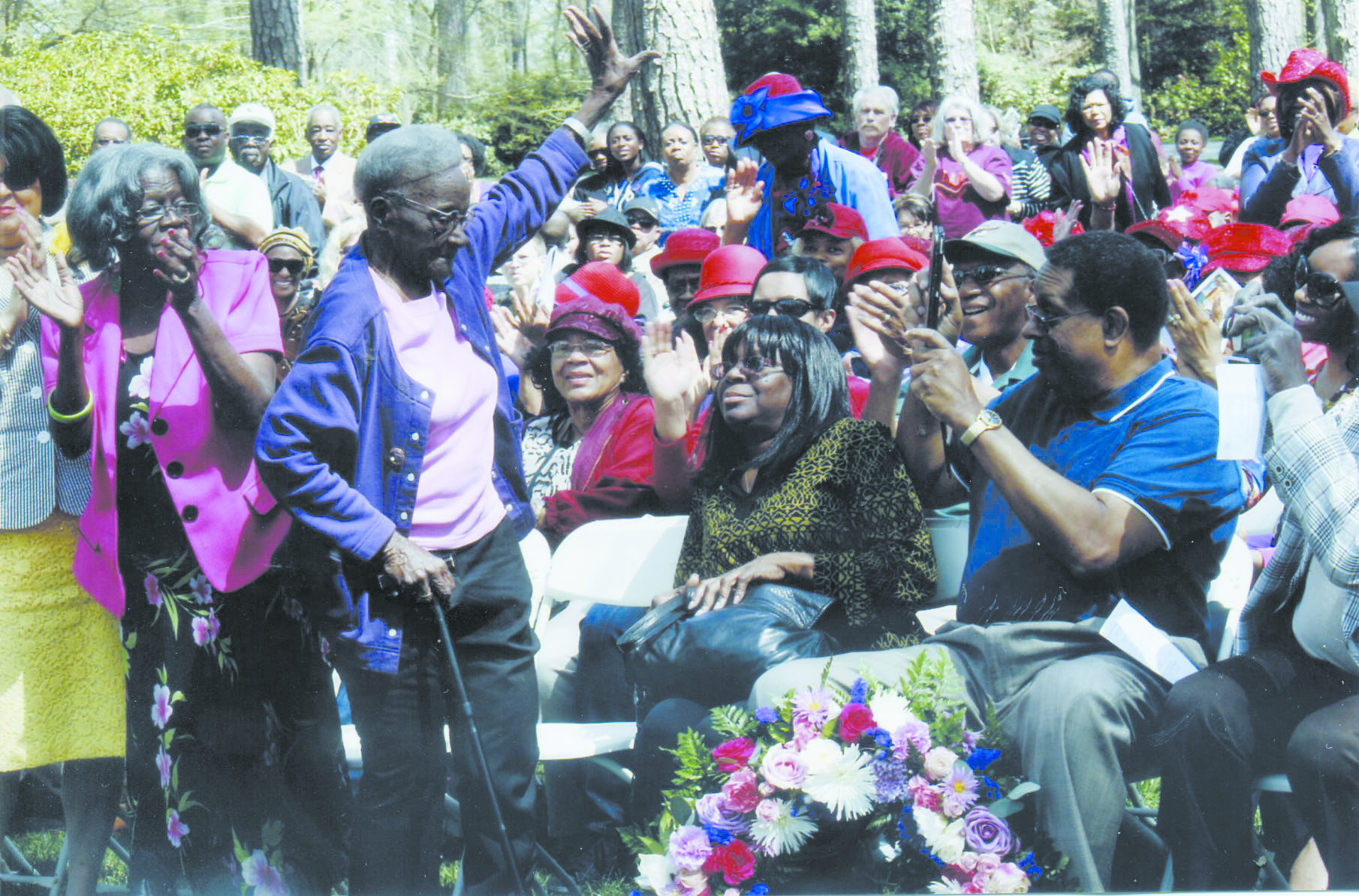 Mrs. Mary Ferguson, the last known person to have helped construct the Norfolk Botanical Garden (NBG) during the recovery period of the nation’s Great Depression, passed on Sunday, April 16 at age 97.

Just two weeks ago, the NBG hosted its 9th Heritage Day on April 8 to commemorate the garden’s beginning and had prepared a bouquet of flowers to present to her. Mrs. Ferguson had attended all of the previous ceremonies, but was absent that day. Her daughter, Helen Ferguson Williams, accepted the flowers on her mother’s behalf.

Mrs. Ferguson was one of 200 African-American women and 20 African-American men who were employed as WPA (Work Progress Administration) workers in 1938 to clear dense vegetation and plant the first azaleas around what is now called Mirror Lake. In just one year, thousands of azaleas, rhododendrons, shrubs and trees were planted. That beginning developed into today’s oasis of 53 themed gardens encompassing 175 beautiful acres.

The WPA Garden Heritage Day event began in 2009 with the unveiling of the commemorative sculpture Breaking Ground and the dedication of the WPA Memorial Garden to honor and celebrate the contributions of the African-American workers whose labor created the Garden.

According to Dr. Martha Williams, who sits on the NBG’s Diversity Committee which was created in 2003, the NBG personnel began a project to collect the names and identification of these workers. They used incomplete NBG records and the media, including the New Journal and Guide which wrote stories in the 1930s about the effort.

Mrs. Mary Ferguson was identified, along with 57 other women, however, to this day, not all of the workers have been identified.

In a 2016 Guide article announcing her book, Williams said, while she was doing her initial research, she discovered the story behind the lives and contributions of the 200 Black women was colored by the legacy policy of Jim Crow segregation.

She referenced a January 22, 1938 edition of the Journal and Guide, which described how angry the Norfolk Black Community was about the working conditions the women endured during those initial stages of the garden’s development.

“There was a picture of the Black women in big coats (in the cold) pushing wheel barrels and shoveling dirt,” said Williams. “Black leaders were outraged because they said such work was not for women, but men or better still – mules.”

“A group of Black leaders went to Richmond to complain to WPA regional officials about the conditions,” she said. “But they did not get any response from them.”

“I read in a publication sponsored by the city’s Chamber of Commerce called ‘Civic Affairs’ which explained why these women were selected for the job,” said Williams. “The article said the ‘colored’ women were on relief (WPA) to help them make money. Also they said that the Black women were best suited to do the job because they were used to ‘stooped’ work…bending over working the vegetable field at the many farms in North Carolina and Virginia.”

“But these ladies did not want a hand out,” said Williams. “They were working to support the families. The wages were 25 cents an hour and in two weeks, they would earn about $17.”

Indeed many of the women who were among those who worked at the Garden also toiled collecting spinach, strawberries and other vegetable crops at nearby farms.

Further, many of the women had received formal training at Virginia State or at Norfolk’s Mission College, both of which served the Black community during Jim Crow.

Williams said the Norfolk Botanical Garden’s Diversity Committee wants to continue the annual tribute to the 200 Black women and 20 Black men who worked to make the Botanical Garden a reality.

Williams said that only 58 of the 200 women who worked from 1938 to 1941 have been identified. Mrs. Ferguson was the last living one of them. In her book she has written bios of varying length of only 24 of them. She wants to expand that number.