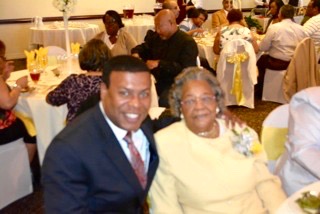 The year 1918 is remembered as the year in which WWI ended. 1918 was also the year of the Spanish Flu pandemic which lasted approximately one year (1918 – 1919). Woodrow Wilson was president, and Ford’s famous Model T was in the middle of its 19 years of production.

But in the midst of the darkness of the world, a little light began to shine. One hundred years ago on March 30, 1918, it was the birth of Alice Mae Ellis to Washington and Della Ellis in Hanover County, Virginia that sparked an internal light in a little baby that would grow to produce a warm and loving heart, an entrepreneurial devotional to service, and a kind and generous spirit.

Mrs. Holloway developed with her husband, The Holloway Catering Service in 1959. The partnership built a loyal clientele that included military generals and admirals, senators, lawyers, doctors and such dignitaries visiting from around the world such as the Duke and Duchess of Norfolk, England. A book entitled “Alice Holloway’s Favorite Recipes” was published in 2016 by Lenora Matthews.

Also in 1936, Mrs. Holloway joined the fellowship of New Calvary and was baptized by Rev. Campbell. She is currently an active member of the D.Y. Campbell and the Golden Ages Ministry.

On Wednesday, March 14, 2018, the church’s Golden Ages Ministry honored, among several others birthday celebrants, Mrs. Holloway as the special birthday guest. After enjoying a potpourri of fine dining at the Golden Corral, Mrs. Holloway was honored to receive a poem by Dr. Margaret Bell, a birthday cake with her image embossed, and a money tree adorned with many bills of varying currency denominations presented by Mrs. Evelyn Cason.

The honors continued for this great centenarian lady for on Saturday, March 31, 2018, family and many friends came together at Mount Gilead Missionary Baptist Church Family Life Center to enjoy “An Afternoon of Celebration, The 100th Birthday of Alice Mae Ellis Holloway.”

Mr. Ernest M. Ellis, Jr. and Ms. Shelby P. Jackson were Master and Mistress of Ceremonies who wonderfully guided the audience with humor and great wit through the evening’s program. Mr. Andre B. Small began the program with the Musical Prelude which preceded the entrance of Mrs. Holloway and her table guests. Musical selections were rendered by soloist Rolesta Milan-Brooks and later by Phyllis Ellis. Grace was given by Mr. Charles E. Ellis.

The many family and friends were invited to give “Expressions of Love,” including a poem by Roy Lessin which expressed the sentiments of all who spoke of their love for Alice Holloway.

Norfolk’s Mayor Alexander spoke of his admiration, honor and respect for this great lady and presented a proclamation proclaiming March 30, 2018 as Alice M. Holloway Day in the city of Norfolk. Dr. William Marcus Small, Pastor of New Calvary, acknowledged Mrs. Holloway as a faithful member for 82 years and gave her great honor and respect for her duty and faithfulness.

After the singing of Happy Birthday and cutting the beautiful birthday cake, Mrs. Holloway gave her remarks of thanks to her adoring family and friends.

On the following Sunday at New Calvary, Easter Sunday and Communion Sunday, Mrs. Holloway, accompanied by her visiting family and friends numbering 40, was recognized by Pastor Small for her being a centenarian and bestowed upon her the rank of Elder in the church, only the second time this honored degree has ever been awarded.