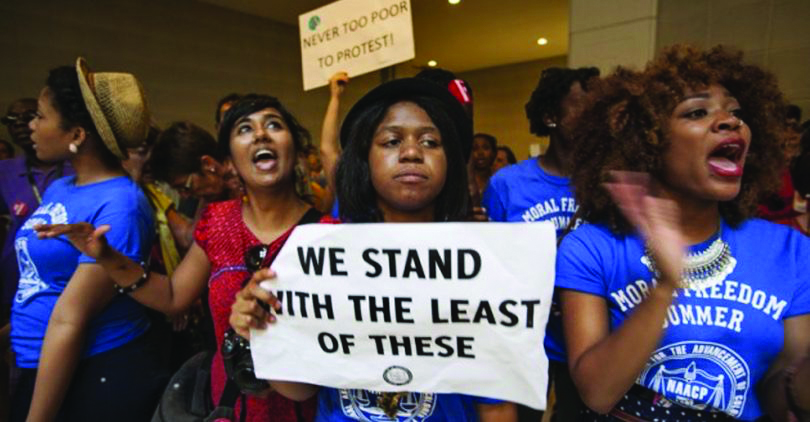 During the contentious 2016 presidential race between Donald Trump and Hillary Clinton, voter turnout still proved to be at an all-time low among students who attended Historically Black Colleges and Universities (HBCU).

In a report released by Tufts University, 2016 voter turnout plummeted by more than 10 points at HBCUs – from 50.5 percent to 39.9 percent.

Only two-years after the election of the very controversial and confrontational President Trump, Kamau Marshall, Director of African-American Media and Deputy National Press Secretary,Democratic Congressional Campaign Committee (DCCC),says that HBCU students are more active and energized to get their vote out and let their voices be heard than ever. Energizing this voting block will make a difference to the outcome of several very important contests this November.

“With the Fall semester kicking off, there is a lot of momentum surrounding this very political climate,” Marshall said. “With November elections right around the corner, HBCU students are playing an active and important role when it comes to voting and voter registration.”

Believing in hope and the possibility of change, many historically Black institutions across the nation are taking the reins when it comes to increasing voter awareness and registration among their student body. For example, Howard University, located in the heart of the nation’s capital, registered over 1,200 new voters during the month of August.

“The more you get involved, the more your voice matters,” Amos Jackson III, president of the Howard Student Government Association (SGA) said. “That’s why it’s was so important for us to heavily promote voter registration. During our August Freshmen move-in day, we were able to register hundreds of new voters.”

“There are a lot of issues up for debate, including higher education costs, gun reform and scholarship budgets, that directly affect millennials,” Jackson continued. “So, when people say that their vote doesn’t count, that’s definitely not true. Your vote matters.”

Howard provides both new and returning students valuable information, including handouts on absentee ballots and voter choices. Howard students are also encouraged to sign up for a service known as “TurboVote,” an app that sends notifications about upcoming elections, an initiative whose success comes as no surprise to Marshall.

“HBCU students are ready to support whoever has their best interest at heart,” Marshall said. “As an HBCU alum – history shows that HBCU students have always been engaged when it comes to the political process. The difference is always with likable candidates.”

In states like Florida and Georgia, HBCU participation is at an all-time high, as students and other citizens eagerly await the hopeful election of productive new governors.

In the state of Florida, Tallahassee Mayor Andrew Gillum, a Democrat, hopes to become the state’s first Black governor in his campaign against Republican Rep. Rob DeSantis.

The race will be one of the most closely watched contests this November, since DeSantis has tied himself to President Donald Trump and defeated other more establishment Republicans.

However, Gillum, a firm believer in Medicare for all, has the backing of progressives like Bernie Sanders and the Black community, who were largely responsible for his upset win during the state’s Democratic primary.

In the state of Georgia, an Atlanta Journal-Constitution/Channel 2 Action News poll showed that Democrat Stacey Abrams, who is African-American, and Republican Brian Kemp are deadlocked in their race at 45 percent each. Contests like those in Florida and Georgia are ammunition to Michelle Obama’s “When We All Vote,” campaign, which recently announced a series of upcoming “When We All Vote” rallies, targeting students at three HBCUs: Clark Atlanta, Morehouse and Spelman.

“There is no time more important than now to be civically engaged and to exercise our right to vote,” Mary Schmidt Campbell, president of Spelman said in a statement.

“Spelman students have been registering their classmates to vote since August – signing up more than one third of our first-year class as soon as they stepped on campus. We are excited about the energy and advocacy ‘When We All Vote’ will bring to the Atlanta University Center.”

Though off-year elections are often seen as less important than those held during Presidential election cycles, Marshall insists that voting during this time November is just as important, particularly for Black millennials.

“Voting impacts people’s everyday lives, including the cost of healthcare, investments in job-creation and community issues like gun violence prevention,” Marshall said. “It’s critical to vote now – in particular – because it’s clear that Republican-controlled Washington is not on the side of regular people, and we need a check and balance.”

“It’s not just the president that can impact issues you care about, it’s also Congress,” Marshall continued. “No one can take anything for granted and we need everyone to turn out on November 6th.”

Follow us
In this article:College Students, Election, HBCU, Vote