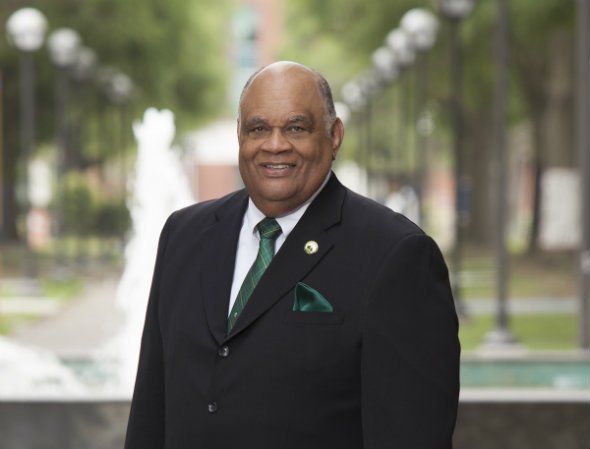 It’s time to start saying our goodbyes to Norfolk State President Eddie Moore. He will retire from NSU at the end of the month. Moore came to NSU as interim president in September 2013. He replaced Dr. Tony Atwater who was fired by the Board of Visitors for what the local media published that state financial reports were behind and the regional accrediting agency signaled trouble. Atwater was hired in 2010 to replace Dr. Carolyn Meyers who was hired in 2006 and forced by the Board of Visitors to resign in June 2010.

Since coming to NSU, Moore completed the financial records, on Atwater’s projected timeline, and received clean audits. Moore also has cleared up the school’s issues and retained accreditation by the Southern Association of Colleges and Schools. He cleaned up some of the lax bookkeeping and other administration issues for which Atwater was dismissed.

He improved enrollment and graduation rates. New buildings on campus were built since Moore’s presidency. He made the campus safer for students by installing call boxes throughout the campus. He rid the school of some of its finance problems and made NSU more financially sound. Under Moore’s tenure the U.S. Department of Energy’s National Nuclear Security Administration and the Department of Defense awarded $30 million dollars in grants to the University’s cybersecurity program.

Moore said the reason he is retiring is because his second hip replacement hasn’t come along the way he wants it to. He said he wants to spend more time with his wife in their Suffolk home. According to the local newspaper when Moore submitted his request to retire to the Board, they all gave him a standing ovation. Moore said that the board’s response made him feel he’d chosen the right time to leave.

That seemed strange to me that the board would give a standing ovation to a man of Moore’s accomplishments instead trying to convince him to stay. I guess it surprised Moore, too, by the statement he made after the standing ovation. I wonder if it was more than his knee problems that’s causing him to leave. Since Moore has done such a good job and only had one year left on his contract, it seems the Board would have encouraged him to try and stay on until next year. They should have offered to work with him showing understanding about his knee problems.

I have been suspicious about the Board and their decision making for some time now. They have dismissed or let resign three Presidents since 2006. Do they have an up to date vetting process for hiring presidents? If not, what are the bases for the board’s hiring decisions for Presidents? They are not making the school look good by going through Presidents at the pace of the last few years.

Moore will be replaced by interim President Dr. Melvin Stith. I don’t know anything about Stith. But according to published information, he is 71-years-old and is a 1968 NSU alumnus and longtime supporter of the university. He is a native of Jarratt, Virginia who received his bachelor’s degree in sociology from NSU and an MBA and PHD in marketing from the Martin J. Whitman School of Management at Syracuse University, in 1973 and 1978.

He is a U.S. Army veteran who worked in Military Intelligence Command. He has 30 years of experience in higher education and has served in leadership roles at several institutions. He has never served as President of a university or college.

Moore said that when he retires he will often do as the song says, be sitting on the dock of the bay, enjoying watching the time roll away. Sounds like a great time for him. In the meantime, Stith has some large shoes to fill. We wish him well!

Shedrick Byrd is a frequent contributor to the New Journal and Guide and a NSU alumnus.