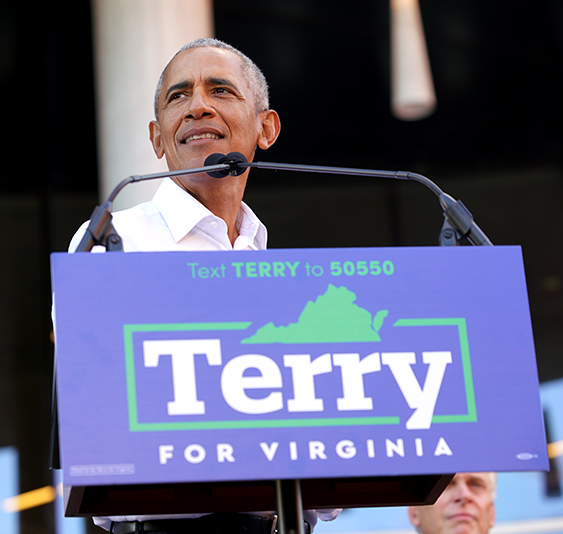 “Together, we will change the direction of this commonwealth.

“Friends, we are going to start that transformation on day one.”

These were the words of Virginia’s Governor-Elect Glenn Youngkin, the morning after he led state Republicans to a stunning victory over the Democrats and Terry McAuliffe.

Not only did the Republicans win the gubernatorial contest, the party also took Lieutenant Governor and the Attorney General.

Democrats who took control of the Virginia House of Delegates two years ago, saw Republicans flip seven seats taking control of that chamber.

The Republicans could hold 52 seats when the next General Assembly session convenes in January, compared to 48 for Democrats

Winsome Sears, who once represented a Norfolk House seat, will be the Lieutenant Governor, the first woman in that seat, and the first African American woman to hold state-wide office.

Also making political history was Republican state House Delegate Jason S. Miyares, who has a Cuban background, and upset two-term Democratic incumbent, Mark Herring to become Virginia’s next attorney general. He becomes the first Latino elected to the office in the history of the state.

Youngkin and the two other members of the GOP ticket, won their seats with a meager 2 percentage points.

The Democratic turnout in Virginia’s largest metro counties dropped by more than 151,000 votes compared with 2017.

Jennifer Lawless, a political science professor at the University of Virginia, told USA Today, Democrats worried about the level of Black voter turnout.

They were instrumental in Biden’s election last year, and while they voted largely for McAuliffe this year, there was a small dip in the Black vote. It is unclear whether the small decrease contributed to McAuliffe’s loss.

Black voter turnout decreased to 16% in 2021 from 20% in 2017, the last time Virginia voted for governor, according to exit polls.

According to the 2021 Virginia exit polls from NBC, 86% of Black voters supported McAuliffe, while 13% backed Youngkin. The same as the gubernatorial race in 2017.

Lawless said that while a marginal change in Black voter turnout could have hurt Democrats, the 2021, it was the increase of white voters which contributed to the GOP victory.

“Even a couple of points of movement in opposite directions can be enough to affect an outcome,” she said, adding that McAuliffe still got the majority of support from Black and Latino voters, according to some exit polls. “The Youngkin victory is a white person victory,” she said.

According to Dr. Eric Claville, the Director of The Center for African American Public Policy (CAAmPP) at Norfolk State University (NSU), the Democrats’ underperformance was evident in Northern Virginia. While Youngkin lost suburban Loudoun County by 11 percentage points, he narrowed the margin considerably from Biden’s 25-percentage-point victory there in 2020.

Biden won white women voters in Virginia over Trump by a 50%-49% margin, exit polls show. But those numbers shifted dramatically this year. Youngkin carried the state’s white women voters over Democrat Terry McAuliffe by a sizable 57%-43% spread, according to NBC exit polls.

Claville said that the Republicans won the cultural war in this election as white suburbanites joined rural counterparts to push back against the two years of liberal political policy achievements by the state’s Democratic Governor and House of Delegates.

This included expansion of protections for Gay Virginians, notably transgender students in the public schools; social justice, judicial and police reforms; expansion of healthcare for the poor, and vaccination mandates.

Also, since the murder of George Floyd, the effort to bring down the monuments to Confederate war heroes such as Robert E. Lee or remove their names from public buildings triggered white rural and suburban pushback against the “woke” cultural movement.

“I think the state Democrats and the National Committee need to go to a ‘woke’ detox,” said Claville. “They need to talk about issues Republican voters do not resent and can understand.”

Claville said the Democrats were seeking to tie Youngkin to former President Donald J. Trump. He is detested by Independents and moderate white Republicans and Black Democrats. But the GOP campaign kept Trump at a distance and barely mentioned him during the campaign.

Meanwhile, Youngkin was talking about reducing the gas and grocery taxes, education reform which protects their children or deters the diversity of educational curriculum with the Critical Race Theory (CRT), which is not taught in the state’s

“Youngkin was talking about kitchen table issues…which resonate with suburban mothers.” said Claville. “CRT is a racist dog-whistle. But many parents are not feeling the policy on transgender students’ protections for sports or in the bathroom.”

Claville said another factor that may have hurt Democrat turnout enthusiasm was “they got away from grassroots organizing, campaigning, and voter registration.”

“Why to bring in a big political star into Norfolk and they do not rally or even walk through the neighborhoods where your urban base of support lives?” said Claville.

“The Democrats should have held a rally or some event every Saturday or Sunday to talk to these voters about the issues and why they should vote?”