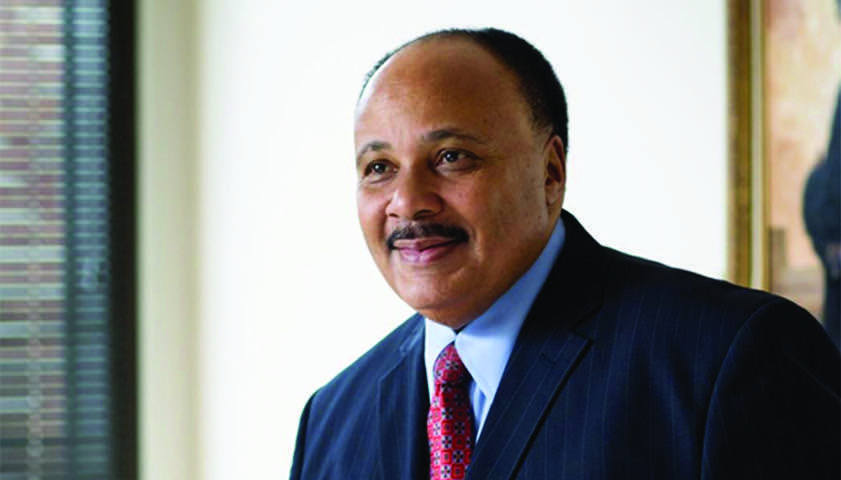 Nearly 50 years ago, the world lost one of its greatest heroes. That hero’s son, Martin Luther King III, continues his father’s work, taking every opportunity to share his father’s vision, message and mission.

“Today, particularly in light of where the nation stands as it relates to leadership … we badly need to embrace my father’s message and we have to learn to disagree without being disagreeable and my dad showed us how that can be done,” said King.

Martin Luther King III went on to graduate from Morehouse College with a bachelor’s degree in political science.

Later, Martin Luther King III became a community activist, county commissioner and president of the Southern Christian Leadership Conference, the organization that his father led as its first president.

Like his father, King has led protest marches and has convened forums on police brutality.

“There’s a barbaric mentality today with police shootings of African-Americans, but all of that can change when people rise up, which is why I applaud Black Lives Matter,” King said.

The civil rights leader said that, in this political climate, it will be essential to mobilize diverse groups of people.

“This election coming up in November is important, because we need a stopgap in Congress, because this president doesn’t have an understanding of what goes on in communities of color,” King said.

King continued: “Right now, the Republicans have the presidency, the House and the Senate, but, this coming election creates prospects of one or both houses being flipped to people who would have some sensitivity to issues [related to civil and human rights].”

King, the National Newspaper Publishers Association 2017 Lifetime Legacy Award recipient, is calling on African-American groups, Hispanics, women’s organization, the LGBTQ community and others to get out and vote.

“That is what needs to happen in November so that come January 2019, we can get legislation that will help,” he said.

King said his mother deserves a lot of credit for his father’s success and for keeping his legacy alive.

“My mom is partially responsible for what my dad’s legacy is, today, because she stayed on the battle field and lived 40 years beyond my dad and she was able to establish the King Center just months after he died and this year will be 50 years since she did that,” King said.

He recalled his father’s famous, “I Have a Dream,” speech and declared that the dream has yet to be fully realized.

“The dream has not been fulfilled. There’s an aspect that’s been accomplished, because we have African-American billionaires and that was part of the dream, but we still have African-Americans in poverty, we disproportionately lead the pack in every major area whether its heart disease, diabetes or hypertension, because of the level of stress that we as a people are forced to live under,” he said, adding that racism in today’s society contributes to that stress.

“We’ve seen communities from around the world, those that come here and are able to start a business, get a business loan while we’ve been here forever and we’re not able to get business loans,” said King. “This isn’t to suggest that we should have a victim’s mentality. You have to acknowledge the problem and know that you can overcome it.”

Living in the shadows of his dad isn’t easy, but it provides certain unique opportunities to contribute, King said.

“If I attempted to wake up and live in his shoes, I’d fail miserably, but it’s a major blessing to have his name and to try to carry it in such a way to make my parents proud,” he said. “I want to continue the legacy that my parents forged. A legacy of fighting for freedom, justice and equality for all.”
Finally, King reminisced about his father’s close relationship with the Black Press.

“Not just ownership, but the writers for the Black Press. Papers like the Chicago Defender, the Atlanta Daily World, the newspapers in Washington,” said King. “The Black Press was tremendously important then and it is important now, because that’s where we get our information.”