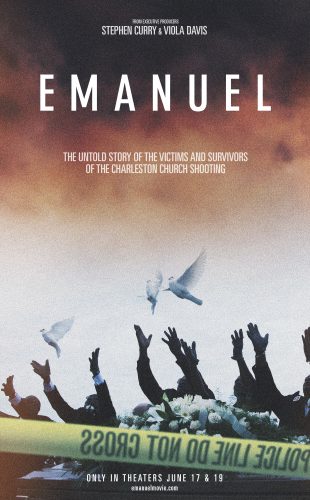 On June 17, 2015, a white supremacist walked into a bible study at the Emanuel African Methodist Episcopal Church in Charleston, South Carolina and gunned down nine African-Americans – leaving their families and the nation to grapple with this senseless act of terror.

On June 17 and 19, 2019 in select theaters across the nation, EMANUEL, a 90-minute documentary film will be shown that powerfully recounts the untold story of the victims and survivors of this tragedy. It weaves the history of race relations in Charleston, the significance and impact of Mother Emanuel Church, and the hope that somehow emerges in the aftermath.

The film was shown first at the DOC NYC Film Festival in November, 2018. It features intimate interviews with survivors and family members, and is a poignant story of justice and faith, love and hate, examining the healing power of forgiveness. Marking the fourth anniversary, EMANUEL will be in movie theaters across the country for two nights only: June 17 and 19.

This story rocked a city and a nation as it happened … and in the days that followed. Executive producers Stephen Curry and Viola Davis, co-producer Mariska Hargitay, and director Brian Ivie (The Drop Box) present EMANUEL.

To learn where the movie is showing in your area, go to https://www.fathomevents.com/events/emanuel-2019. Just type in your zip code for the theater showings in your area on June 17 and June 19 only.