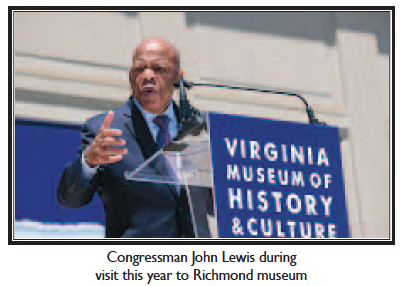 “I am going to fight it,” read a statement from Rep. John Lewis on the evening of December 29.

“I may miss a few votes during this period, but with God’s grace I will be back on the front lines soon,” he added. Lewis announced on the last week of 2019 that he has been diagnosed with stage IV pancreatic cancer.

The news sent shock waves through the political community on the left and right and prompted many to reflect on what Lewis’ life has added to American history.

“While I am clear-eyed about the prognosis, doctors have told me that recent medical advances have made this type of cancer treatable in many cases, that treatment options are no longer as debilitating as they once were, and that I have a fighting chance,” Lewis continued in his statement.

The Georgia Congressman and civil rights icon was first elected to Georgia’s Fifth Congressional District in 1986.

In a year that sadly saw the end of the lives of Congressional Black Caucus co-founder John Conyers of Michigan and revered Baltimore Congressman Elijah Cummings, Lewis’ diagnosis was particularly jarring.

At a time when the country is in need of moral authority many reflected on the diagnosis as a wake-up call.

“John Lewis is one of our great American heroes who reshaped our American Dream. His is a priceless gift which leaves us forever in his debt. It’s been said that honest public service is the rent we pay to live in America. He pays his rent better than most everyone else and, hopefully, will remain in Congress long after he beats this cancer, no easy thing as he knows. His guts as a college student inspired me to integrate the campus elective politics of my college and later to help Wilder when no one else in Va., who looked like me would.

In a country struggling to make Dr. King’s a reality for so many far too long, we simply can’t afford to be without John Lewis. There are too few of such icons left,” wrote Virginia political legend Paul Goldman. Goldman was incremental in electing America’s first African-American Governor, L. Douglas Wilder.

“John Lewis is a giant – an icon of the civil rights movement, a leader in Congress and one of the kindest people I know. I’m praying for a speedy and full recovery. We need you making good trouble in the halls of Congress,” wrote Freshman Rep. Ilhan Omar (D-MN).

“Our hero. Our shining beacon and standard. Praying for Rep, John Lewis and his family. And for us all,” wrote attorney Sherrilyn Iffill, President of the NAACP Legal Defense and Educational Fund.

Follow us
In this article:Congress, MLK, Rep John Lewis