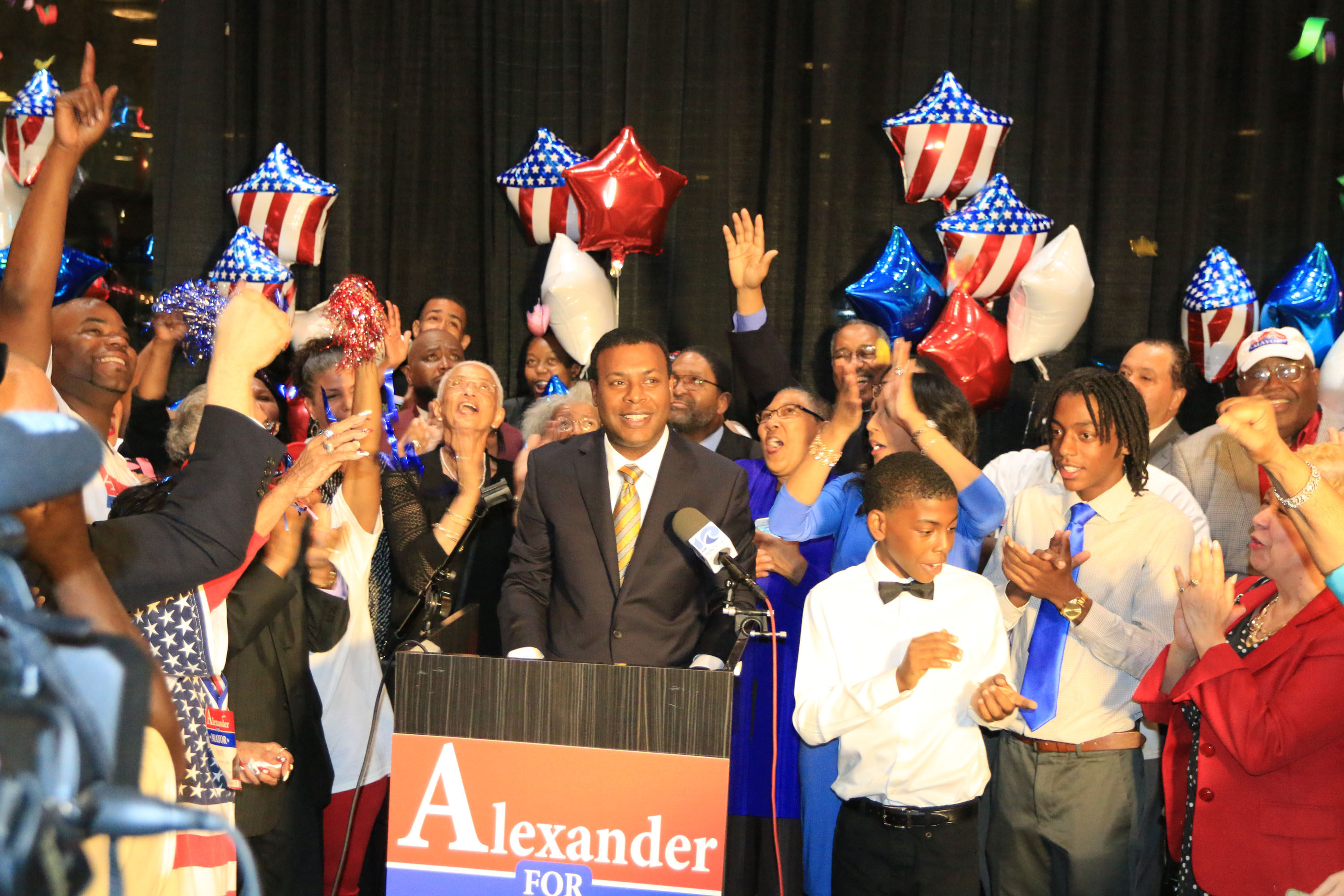 Four centuries after it was founded in 1682, the city of Norfolk has elected Virginia State Senator Kenneth C. Alexander as its first African American Mayor. Norfolk was one of two cities in the region, with Virginia Beach, that had never had an African American as the city’s leader. The outcome of the May 3 municipal election determined who would replace Mayor Paul Fraim, who said he would not run for another term after serving 22 years in that seat and three decades total on council. Fraim was among the hundreds of well wishers who turned out Tuesday night at the Wyndham Hotel to cheer on Alexander as he gave his victory speech. Senator Alexander, who grew up in the city’s Berkley section, owns a chain of funeral homes, will be sworn in on July 1.

With most of the polls precincts counted, Alexander secured some 51.6 percent of the votes compared with his closest rival, Norfolk Councilman Andy Protogyrou, who garnered 25.3 percent of the vote and Norfolk Sheriff Bob McCabe, who won 23.1 percent. Overall 31,623 votes were cast. Alexander got 16,352 of them. In the early precinct count when the polls first closed, Protogyrou held a steady 12-point lead over his two rivals. He held sway in the western part of the city and McCabe was holding strong in the northeast party of the city in the neighborhoods of Ocean View.

But in each of the precincts won by his rivals, Alexander tallied votes to stay close to his competitors. Alexander then got a precinct win in Titus Town, a Black enclave in the northwest part of the city, and quickly began to gain speed. By 8:45 p.m., Alexander began to pull away as he garnered strength in the central, eastern and southern parts of the city in the highly diverse and mostly Black sections downtown. In Berkley where he grew up, he pulled 99 percent of the vote.

All three of the camps were worried that the early morning rainfall in the city would hurt turnout, especially among Black voters. But a strong get out the vote effort among the Black churches, the NAACP and other groups aroused Blacks to vote, especially in the public housing communities. Alexander, local political watchers and supporters say, ran one of the most polished, well organized and technically savvy campaigns in the city’s history. Even if he had lost, his strongest supporters say, his campaign should be studied as a template of how to win an at-large election in a city as diverse as Norfolk.

Political watchers said that negative attack campaign ads against Alexander and McCabe may have short-circuited support among White and Black supporters of Protogyrou in the final days of the campaign. Further, the endorsement of Alexander by outgoing Mayor Paul Fraim is believed by some to have been a blessing for the Senator, as well. Alexander relied not only on Black votes in Super Ward 7, which covers half of the city, but he also gathered many votes in other majority White wards. Angelia Williams Graves reclaimed her seat on the council, winning Super Ward 7. She will be joined by Andria McClellan, who beat Ward 6 incumbent Barclay Winn, who lost his reelection bid after 16 years on council.

There are now four Blacks and four Whites on panel. There are now four women and three males council members on Norfolk’s governing body. With Alexander, it is evenly divided so far as gender. Norfolk voters were able to vote for school board for the first time in several generations and Dr. Noelle Gabriel beat back a challenge from businessman Carter C. Smith. Norfolk School Board chair Rodney Jordan won his seat unopposed.

In Chesapeake, Alan P. Krasnoff won a uncontested election to regain his seat as mayor. There will still only be one Black person on city council. Dwight M. Parker and David B.. Washington both lost their bids to win one of the three open seats in Chesapeake Council this spring. S.Z. Ritter, Richard West and Robert C. Ike, Jr., all White, won seats. Samuel L. Boone, who is Black, won one of the four open seats on the Chesapeake School board. Dr. Ella Ward is the lone Black on the city’s Council now.