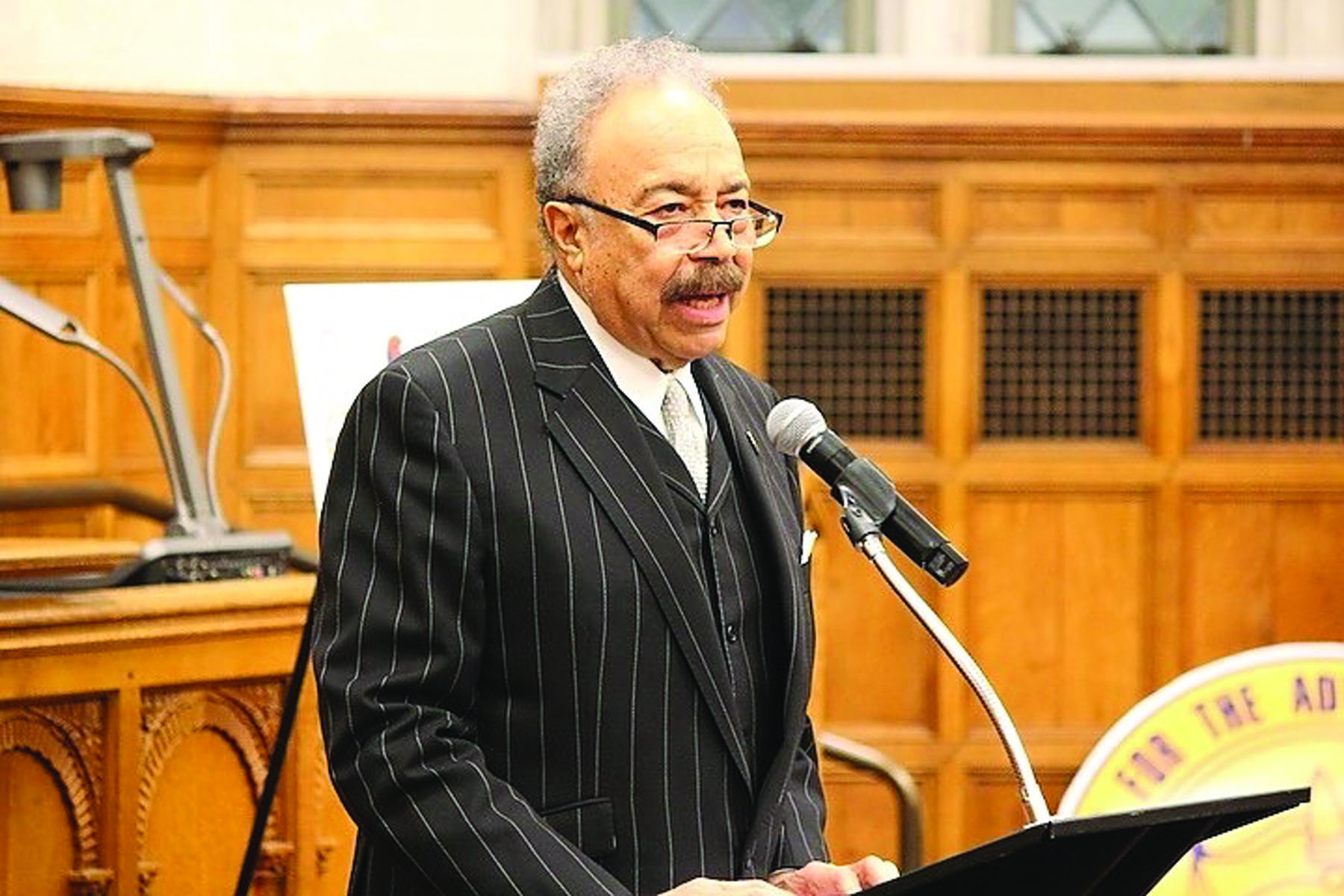 Offer aspiring teachers scholarship money. After hiring them, match them with veteran-teacher mentors. And treat them with respect.

The nearly four-decade head of an historically Black university offered those tips and others Thursday night to school districts like New Haven that seek to increase the number of Black and Latino teachers in their classrooms.

William Harvey, president of Hampton University, a nearly 150 year old HBCU in Hampton, Va., laid out those strategies and more at a town hall meeting at Yale Law School.

New Haven Public Schools partnered with the Connecticut NAACP to put on a two-day education symposium featuring representatives from 30 historically Black colleges and universities, or HBCUs, in an effort to create a pipeline for recruiting teachers and administrators of color to the district. In addition to Thursday’s address by Harvey, attendees participated in workshops on principal engagement, preparing teachers from historically Black colleges and universities (HBCUs), teaching and learning, and the state’s teacher certification process.

Harvey told attendees at the town hall meeting that HBCUs are a vital part of the conversation about not only recruiting people of color to the teaching profession, but also attacking the national teacher shortage. HBCUs graduate 50 percent of all African-American teachers.

He had both good news and not so good news to share with the crowd.

Students today have more options about what schools they can attend than Harvey had when he graduated from HBCUs Talladega College in 1961 and Virginia State University in 1966, Harvey said. The good news is that African-American graduates of HBCUs are more satisfied with their education and their overall well-being in their post graduate life, than were their counterparts who attended predominately white institutions, or PWIs.

“These are Gallup facts, not William Harvey facts,” he said as he referenced a 2015 survey of African-American graduates.

But he said despite the high level of satisfaction with the HBCU college experience, increasingly Black students are steered away from attending HBCUs. Harvey attributed that fact to a worldview of some guidance counselors that HBCUs are inferior to universities like Yale and Harvard, or even the predominate state university.

Harvey, who also received a doctorate from Harvard University in 1972, said he wasn’t trying to minimize what one can learn at a PWI, only to highlight the value that can be found in HBCUs.

“When I began teaching in 1965, it was a common fact that Black students were taught by Black teachers who lived and worked in the Black community,” he said. “These teachers were often the pillars of the community and well respected by all during this time. A majority of these teachers attended HBCUs because that was primarily the only option that we had. Now ladies and gentlemen that landscape has changed.”

He told the audience that the landscape has changed in other ways, and that’s the not so good news. Teaching is not nearly as popular a career path as it had been among Black college students, or students of any ethnic group. Computer science, communications and business are the majors students want to pursue. He said he believes that it’s partly because those profession get all the marketing hype, the headlines and the money.

“College students seem to view other professions as more exciting, glamorous and lucrative,” he said. He pointed to the Princeton Review’s Top 10 College Majors, noting that education was nowhere on the list.

Several of the solutions he offered were in the vein of making the profession a more attractive path. Harvey suggested that more be done to market the teaching profession. He also suggested that more money be invested in students who seek to teach in the same way that it is now available for those pursing degrees in science, technology, engineering and math, or STEM.

Additionally, he called for more public and private investment – forming partnerships with school districts, along with other universities and foundations – in teacher preparation programs, particularly at HBCUs because they are where half of African-Americans educators earn their degrees.

Once you get African-Americans into the profession, he said, the numbers show that retention is more challenging than recruitment. School districts can’t abandon those new teachers, he said. Instead, they must be supported, mentored and respected.

“The majority who leave the profession do so within their first few years,” he said. “Therefore, the experiences of new teachers entering the work force are critical to them remaining in the profession.”

Shortage Can Be Overcome

He said new teachers need mentoring relationships with veteran teachers to deal with everything from the politics of their school building to handling discipline problems in the classroom. He said that those relationships must be non-adversarial, meaning that the veteran teacher-mentors should not be involved in evaluating the new teacher’s job performance.
Harvey said that the general shrinking interest in the profession, combined with a shrinking interest in the profession among an underrepresented group like African-Americans, adds up to a significant teacher shortage. He encouraged the audience not to despair, but to act.

“I personally believe with the right amount of emphasis on this problem and with appropriate funding our nation will see an increase in the number of African-American teachers in our classrooms,” he said. “We know the problems. We know the challenges. We know the issues, and we also know the promises. So I say to you, we have a lot of work to do. Let’s get on with it.”

This article is reprinted with permission from the New Haven (Connecticut) Independent newspaper, published December 2, 2016.