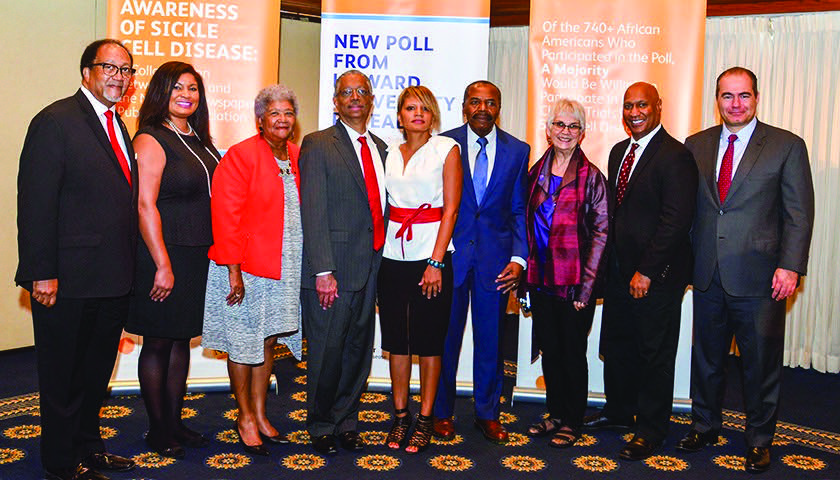 A new poll about sickle cell disease (SCD), presented by the National Newspaper Publishers Association (NNPA) and Pfizer revealed that while the majority of respondents were familiar with the illness, less than 40 percent realized that it disproportionately affects people of African descent.

The NNPA is a trade group that represents more than 200 African-American-owned community newspapers operating in the United States. Earlier this year, Pfizer partnered with the NNPA to increase awareness about SCD in the Black community and to encourage greater participation in clinical trials for treatments involving the disease.

The groundbreaking poll also helped to dispel one of the long-held myths about the negative perception of medical professionals in the Black community.

The poll revealed that, despite long-standing historical perceptions of mistrust in medical professionals by the Black community, 91 percent of respondents indicated that they believe health care professionals are trustworthy.

Seventy-nine percent of respondents had positive or neutral attitudes toward sickle cell disease (SCD) trials and a majority indicated a willingness to participate in future clinical trials for SCD, given appropriate knowledge and recommendations from health care professionals.

“Our core belief is that every patient counts, especially when it comes to a rare disease,” said Michael Goettler, the global president of Pfizer’s Rare Disease unit.
“When you have a rare disease, often you feel lonely and your physician may not be able to help you.”

Goettler noted that the poll results provide a basis for Pfizer to seek more detailed assistance for sufferers.

Even though the greatest burden for SCD is upon African-Americans, there’s limited research regarding African-Americans’ knowledge and thoughts about clinical trials that study the health impacts of the illness, the report said.

“These poll findings will give our readers an in-depth understanding of how sickle cell disease is perceived by African-Americans,” said Dr. Benjamin F. Chavis, Jr., president and CEO of the NNPA. “With this knowledge from the dedicated research team at Howard University, and through our collaboration with Pfizer, we can spur meaningful conversation and assess the best ways to improve disease education for those impacted in our communities.”

Dorothy Leavell, the chairman of the NNPA, said that she’s pleased to be a part of a group delivering “good news,” as well as the research that Pfizer continues to embark upon, on behalf of SCD patients.

SCD is a lifelong and debilitating disorder that affects red blood cells and it’s the most common inherited blood disorder in the U.S. Most people who live with SCD are of African descent and the disease occurs in one out of 365 African-American births.

Williams said that the insight from the poll will not only help researchers determine how to further enhance disease education and awareness, but will also help Pfizer educate SCD patients and their families about the importance of clinical trials in bringing novel treatment options to market for those in need.

The survey was conducted by researchers at Howard University, who made 31,934 telephone calls for the poll that was conducted between June 15 and July 15. A total of 741 individuals aged 20 to 70 living across the country, who identified as being of African-American ethnicity, responded to the survey.

The majority of respondents (79 percent) said they understood the importance of disease education and expressed the need for additional current information, specifically regarding pain relief, clinical trials and progress toward better treatment or a cure.

“It’s not surprising for us that a majority of our participants understood and were previously aware of sickle cell disease,” said Dr. Terri Adams, an associate dean in the College of Arts and Sciences at Howard University. “The overwhelming majority understood that it’s a disease, a blood disorder.”

Adams continued: “There was a willingness to participate in [SCD] clinical trials, however, 82 percent had very or somewhat negative attitudes toward clinical trials in general, so there’s still a general mistrust in clinical trials.”

Researchers and officials at Pfizer and the NNPA each said that they hope to continue to educate patients, family members and primary care doctors about SCD clinical trials.

“Close to 20 percent said they were unsure of how it was inherited and this presents a problem,” Adams said. “If you don’t know how it’s inherited, you may be putting your offspring at risk.”