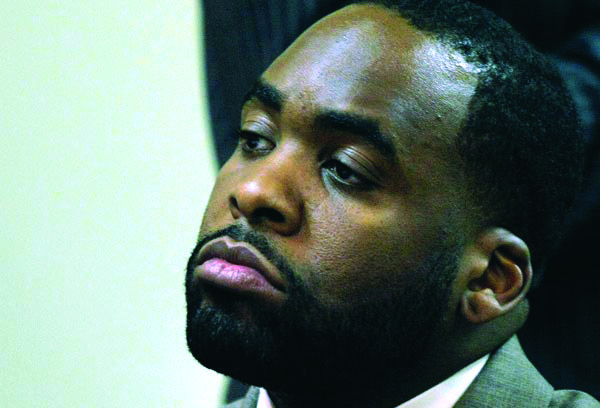 DETROIT - APRIL 11: Detroit Mayor Kwame Kilpatrick attends a hearing in 36th District Court to determine his travel restrictions April 11, 2008 in Detroit, Michigan. The mayor has been charged with perjury and other offenses in a text messaging scandal. (Photo by Bill Pugliano/Getty Images) *** Local Caption *** Kwame Kilpatrick

(TriceEdneyWire.com)
Kwame Kilpatrick, the former mayor of Detroit, claims Michigan governors Jennifer Granholm and Rick Snyder knew about Flint’s water problems long before they received national and international attention because of the water’s high lead content.
“Gov. Snyder is misleading people by saying he recently found about the issue,” Kilpatrick wrote in a Facebook post from a federal prison where he is serving 28 years.”More than likely, he is being viciously, aggressively and deliberately untruthful.” Kilpatrick is appealing his sentence.
Granholm was Michigan’s governor from 2003 to 2011.

He added that Gov. Granholm, Snyder’s predecessor, also was well aware of the issues with the Flint Water Department and their inability to produce contaminant-free water moving forward. He noted the state couldn’t afford the equipment and the technology to do so. Snyder has been governor since 2011.
Brookings, a Washington, D.C.-based research organization, said Flint has struggled to pay for needed maintenance on pipes and other facilities, which not only buckle under time and pressure in the form of widespread leaks, but also result in higher costs and declining water quality.
“As a result, Flint is now facing a total water bill of up to $1.5 billion and needs a host of different public, private and civic leaders to act to accelerate infrastructure improvements,” Brookins said.

The Detroit Water and Sewage Department talked about the problems of the Flint Water Department with respect to cleanliness, elimination of contaminants, mercury and lead levels, Kilpatrick said.
He noted that the problems with Flint’s water supply date back to 2004 despite Flint being with the Detroit Water and Sewage Department until 2014. Flint, a city of 99,000, is 60 miles northwest of Detroit.

In 2014, Flint began using drinking water from the contaminated Flint River instead of from Lake Huron, which supplies water to Detroit. State officials first denied that Flint’s water had high levels of lead that adversely affect people physically and mentally for decades.