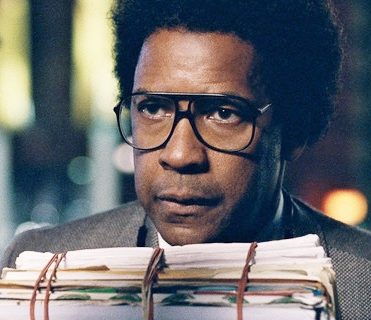 Denzel Washington may be the most accomplished actor of our generation. Like a chameleon, he’s morphed from the stern father in “Fences” to a dorky, introverted attorney in this meandering crime-drama/thriller. His talent is more than enough reason to sit through the two hours and nine minutes of misguided, anticlimactic storytelling.

Now in his mid-sixties, he’s spent the better part of his career sequestered in a Los Angeles law office, surrounded by files and books. He’s an egghead. The brains of the firm, not the dazzling courtroom attorney.

When Roman’s extroverted law partner suffers a heart attack and can’t return to work, the bookworm is forced to plead cases in criminal courtrooms, to no success.

He finds work at a glitzy law firm run by a slick attorney (Colin Farrell, “Fantastic Beasts and Where to Find Them”), and fails to fit in. A budding romance with a teacher/social activist (Carmen Ejogo, “Alien: Covenant”) brings him to the doorstep of reality. Working a case for a defendant, who is accused of murder, puts the naïve and income-challenged Roman in a tempting situation, where he can collect a reward.

“I’m tired of doing the impossible for the ungrateful,” Israel says.

Gilroy’s script exhausts its energy in the beginning, meticulously setting up Roman’s character. Then it runs out of steam and ideas. What’s the point in watching a man who is living on the edge of insanity if there isn’t a breakthrough that takes him somewhere audiences could not have imagined? Or, why tag along with a failed attorney if he doesn’t redeem himself?

The contrast between Roman’s old digs and his new fancy condo is all the more startling because of the diametrically-opposed set designs (set decorator Meg Everist and production design Kevin Kavanaugh from “Nightcrawler”). And if prizes were given for making wonky characters appear suitably shabby, costume designer Francine Jamison-Tanchuck (“The Birth of a Nation”) would win.

Colin Farrell, with his slicked-back hair and fancy suits displays the right balance of cold-as-ice calculating attorney and caring snake. Somehow, it’s a bit hard to imagine a woman, who looks like Carmen Ejogo (“Selma”) having a romantic interest in man who looks like an urban bear. Yet, their beauty and the beast flirtations are worth a gander.

Both actors greatly support Denzel Washington as he crafts a character that was not previously in his arsenal. In most of his performances, anger, decisiveness and self-assurance have well-complimented his leading man looks. For the first time in memory, those innate characteristics are absent. His Roman is a muddled misfit, who makes bad choices; his instincts block him. The slouched posture, protruding stomach and puffy face, also mean that Washington has laid all vanity aside to thoroughly inhabit this unique role.

The quirky story of “Roman J. Israel, Esq.” is unmemorable. However, it is a very useful showcase for one of the finest actors working today. This kind of performance makes Oscar voters stand in awe. This kind of acting keeps viewers’ eyes glued to the screen, regardless of the surroundings.