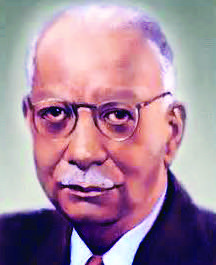 NORFOLK
On December 13 at the Vivian Carter Mason Cultural Center at 700 Onley Road, a state historical marker issued by the Virginia Department of Historic Resources will be dedicated to P.B. Young, Sr., founding Publisher of the 117-year-old New Journal and Guide.

Young arrived in Norfolk in 1907, fresh out of St. Augustine College in Raleigh, to work as a reporter at the Lodge Journal and Guide, the newsletter of an African American fraternal organization that began publishing in 1900.

In 1910, he purchased the newsletter and enlarged its scope into a position of state-wide and national prominence.

By the 1940s, it was among the most widely circulated African American weeklies in the nation, and Young became one of Virginia’s most influential Black citizens and a national spokesman on race.

Young retired from running the paper in the early 1950s and died in 1962. His sons and other key staff members ran the publication until it was sold in 1972 to Bishop Levi Willis; then to Attorney Hugo Madison; and again in 1974 to Dr. Milton A. Reid. The current owner and publisher since 1991 is Brenda H. Andrews.

In 1996, the State of North Carolina dedicated a similar historical marker in Halifax County on Highway 158 near Littleton, N.C. where Young was born.