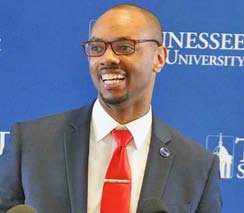 “It means the world to me to be the head coach at TSU,” Collins told The Tennessean newspaper. “Once I decided to get into the business, my eyes were always set on this job. This is truly a dream come true that I will not take for granted.”

Collins, 34, began his coaching career as a graduate assistant at TSU on coach Cy Alexander’s staff in 2007-08. He then served a TSU’s director of basketball operations in 2008-09. Collins was considered the favorite for the position as soon as it became open on March 21. He had been a finalist for the TSU position when Ford was hired in 2014.

He served as an assistant this past season on Dan Muller’s staff at Illinois State. The Redbirds went 18-15 and advanced to the championship of Missouri Valley Conference tournament where they lost to Loyola Chicago, which is now in the Final Four.

Collins previously was an assistant at East Tennessee State (2015-17). Before that he was the head coach at Columbia State Community College (2012-15). and made back-to-back NJCAA National Tournament appearances, including runs to the Elite Eight in 2014 and the Sweet 16 in 2015.

Collins played at Belmont from 2002-06. In his senior season (2005-06) Collins led Belmont
to its first NCAA Division tournament berth. He scored 1,199 career points and graduated as Belmont’s all-time leader in assists and steals.[/cs_text][/cs_element_column][/cs_element_row][/cs_element_section][/cs_content]