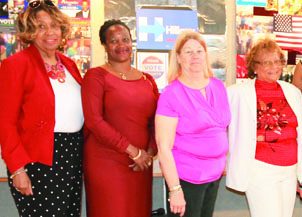 By T. Holland
Special to the New Journal and Guide

CHESAPEAKE
Chesapeake Democratic Women commemorated their 45th anniversary on Saturday, April 16, 2016, at the Old Portlock Schoolhouse. Every year CDW hosts an annual Spring fundraiser and this year the organization chose to present a gallery showing themed, ‘A Glance Back In Time,” which included photos and memorabilia dating back to the clubs’ inception. “It was beautiful. I really enjoyed everything,” said Joan Jones, a senior member of the organization.

The event was well attended. Many community organizers, supporters, and politicians spent the afternoon perusing the photo clad walls and elegantly decorated venue.
Additionally, guests had an opportunity to listen to a detailed and personal history of women considered to be “Trailblazers,” presented by former Mayor, Dr. William Ward. Current Mayor of Chesapeake, Alan P. Krasnoff, offered a lively greeting and words of encouragement to the guests. Congressman Bobby Scott, who is now representing areas of Chesapeake, offered well-wishes and an enjoyable speech.

Dee Dee Gee sang the National Anthem, which garnered numerous rounds of applause and left one with goosebumps. The afternoon was relaxing and intimate. Guests mixed and mingled while listening to the talented keyboardist, Peter Georges. Many previous supporters were surprised to see their faces on the wall. “We are family and I wanted to include our supporters in the gallery because when I glanced back, they were the ones supporting us throughout the years,” said Tracey Holland.
Senators Louise Lucas and Kenneth Alexander came out to enjoy the festivities with everyone, as well as Delegate Lionel Spruill, Faye Mitchell and Cynthia Morrison. City Council candidates, Dwight Parker, David Washington and Gene Waters, were also in attendance. President Kismet Nettles reminded guests of the upcoming May 3rd election as well her gratitude for their continued support through the years.

Margaret Walker, Sylvia Anderson and Joan Jones, three of the organization’s senior members, were presented with flowers for their long-standing service. Each of the ladies gave brief comments and were very excited to receive the token of appreciation.Chesapeake Democratic Women participate in numerous community activities, such as donating to various homeless shelters, nursing homes, year-round visits to seniors in the community and food bank donations. A yearly scholarship is awarded to graduating senior Chesapeake young ladies from the Nora Davenport Scholarship Fund during the month of June. The organization meets the first Saturday of every month 1 p.m. at the Lighthouse Pointe, 933 Cedar Road, Chesapeake. New members are welcome. Please send inquiries to P. O. Box 2042, Chesapeake, VA. 23327.