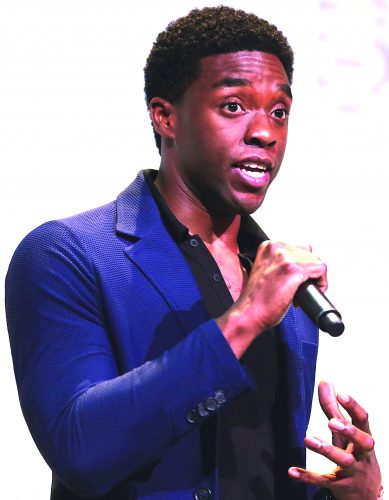 Howard University alumnus Chadwick Boseman, 40, will give the keynote address at the school’s 150th commencement ceremony on May 12. The star of the movie “Black Panther” will also be presented with an honorary Doctor of Humane Letters.

“I’m excited to return to the Mecca in celebration of the achievements of our illustrious students,” Boseman said in a statement announcing the keynote address. “Let’s listen, learn and build with one another.”

He made his debut in the Marvel Cinematic Universe as the African superhero in Marvel Studios’ “Captain America: Civil War,” in May 2016. Boseman’s breakout performance came in 2013 when he received rave reviews for his portrayal of the legendary Jackie Robinson in Warner Bros’ “42” opposite Harrison Ford. He also portrayed James Brown in Universal Pictures’ “Get on Up.”

“We are extremely pleased that Chadwick Boseman has accepted our invitation to address the class of 2018,” said Howard University Board of Trustees Chair Stacey Mobley. “His words as one who has walked the same halls as our graduates will truly resonate and inspire them to reach for the stars.”

Mobley continued: “It is an incredible honor and privilege for the Howard University community to welcome back home one of its native sons, Chadwick Boseman, to deliver the 2018 commencement address. He has played some of the most iconic African-Americans that have transformed history, including Jackie Robinson, James Brown and Howard’s own Thurgood Marshall.”

In a statement about Howard University’s 150th commencement ceremony, Howard President Wayne Frederick said that Boseman’s role in the blockbuster film “Black Panther” reminds us of the excellence found in the African diaspora.

“Howard continues to be a gem that produces the next generation of artist-scholars, humanitarians, scientists, engineers and doctors,” said Frederick. “Mr. Boseman exemplifies the monumental heights and levels Howard graduates can achieve by using the skills and knowledge they acquired at the university.”

This story was originally posted at BlackPressUSA.com.

Lauren Victoria Burke is a congressional correspondent for the NNPA Newswire. Lauren also works independently as a political analyst and communications strategist. You can reach Lauren by email at LBurke007@gmail.com and on Twitter at @LVBurke.