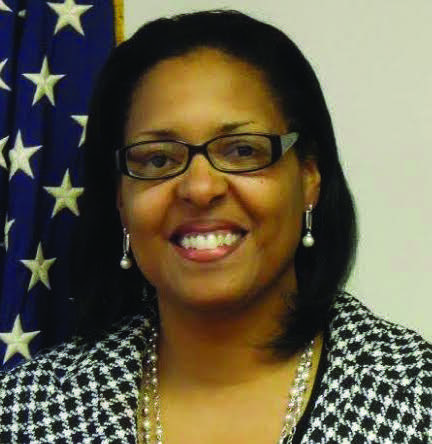 Ask Jamilla Burney-Divens how she moved from being the first female drum major in high school, to recently being promoted to the regional operations chief for the Virginia Department of Corrections- Eastern Region, and she will say she has a habit of finding her way to the front line.

Here are the facts. Burney-Divens was a student at George Washington Carver High School in Martinsville during the desegregation era in the 1970s. She was a member of the band. But instead of choosing the clarinet or the flute, which most students of color chose, she enrolled in a summer camp for drum majors at Appalachian State College in Boone, N.C. Soon, she returned home to Martinsville, auditioned for the position of drum major, and served as the first female drum major for two years until she graduated in 1978.

The point is she found her way to the front of the line by marching to a different beat. Instead of settling down and picking up a clarinet or flute, like most of the students of color, Burney-Divens decided she would learn how to play the tuba.

“I learned how to play it in two weeks,” Burney-Divens said in a recent email. “From there, I just went from (one) instrument to another; then I asked to be the drum major, but there was no one who knew how to train me … I guess what I am saying in a nutshell is when I entered the band at the lowest level, I put my eyes on where I wanted to be and worked to get there.”

Burney-Divens added, “I always was aware of my leadership ability. I set my aspirations and focus at a higher level and began equipping myself through training to reach that goal.”
Burney-Divens also developed leadership skills at home. Although her mother Jessie M. Burney, a teacher, was battling breast cancer, and challenges loomed since her father, Charles E. Burney had relocated to take a job in Ohio, Burney-Divens nursed her mother and helped her mother raise her younger brother, Rahsul C. Burney, who is 53 now and lives in Greensboro.

“I am the elder sibling,” she said. “My brother and I are very close. When we were young, my father worked in Ohio for 10 years and my mother was a school teacher. However, during that time, she became ill with breast cancer, and I assumed a lot or responsibility at a very young age.

See I was not going to allow anything to happen to my baby brother (who by the way is now 53 years old, 6 foot 5 muscular and thinks he is now my big brother. I think that is when my leadership skills began.”

The habit of marching to a different beat continued after she enrolled in Hampton University. But multiple mentors stepped in, including a former educator at Hampton, who offered support and gave her a supervisory position in the dormitories.

“As a student at Hampton, I met a lady by the name of Sharon B. Lowe who changed my life forever,” said Burney-Divens who earned her bachelor’s in urban extension/human ecology in 1982 at Hampton. She earned her master’s at Hampton in 1985.

“When I arrived at Hampton, I was just a country girl raised in Martinsville. She was the dean of women. Dean Lowe (as everyone so fondly responded to her) took me under her wing and immediately threw me into a leadership position.

“The college was running out of bed space and they decided to open for the first time, the Trustee House. However, they needed to place someone there to oversee it. I would be the one to be solely responsible for the residence that would be assigned to the Trustee House.

“She paid me $120 a month and I thought I was rich. Through this one job she taught me ethics, report writing, and how to make tough decisions … A village prepared me for where I am today,” she explained. “I did not get here on my own. I had adopted mothers, an English teacher, a music teacher and friends who loaned me their shoulder for life.”

Burney-Divens’ sprouting leadership skills continued to blossom. She began her career in corrections by working as a rehabilitation counselor with the Greensville Correction Center in 1992.

“I entered the Department of Corrections as a rehabilitation counselor and my goal was to be the best counselor that I could be, but I always was aware of my leadership ability,” she explained. “I set my aspirations and focus at a higher level and began equipping myself through training to reach that goal.”

She is currently the regional operations chief for the Eastern Region which encompasses all of the probation and parole offices from Emporia, to Accomac on the Eastern Shore which includes but is not limited to Norfolk, Virginia Beach, the Peninsula and Warsaw, as well as all of the prisons and field units, she continued in her recent email.

Clearly, she has a habit of hitting the intended target because she has a habit of taking a leap of faith, thinking in visionary terms, and juggling multiple responsibilities.
“I guess what I am saying in a nutshell is when I entered the band at the lowest level, I put my eyes on where I wanted to be and worked to get there,” Burney-Divens said, describing how she moved from the back-to-the-front-of-the-line in her high school band.

The same type of logic has paid off in her career. In her new post, she will manage “3132 employees and six direct reports … Included in those six are an operations and business managers, two regional administrators, one over Institutions and the other over community corrections i.e. probation and parole,” she said in her recent email.

“They both have regional managers. This encompasses nine institutions and 14 probation and parole offices.”

At home, she will continue to juggle many balls since she is the wife of a busy pastor,Rev. Thomas L. Divens. “I have to turn my hat as to not be misinterpreted as not caring; which could not be further from the truth,” she said of her multiple roles. “I prioritize by importance and due dates,” she explained.

“In my line of work, the workflow is enormous and emergencies are higher than in the average profession and it rarely, slows down; therefore, you must prioritize and do the best that you can do with the information that is in front of you, but most importantly: Make a decision, own it, good or bad, and move on. I believe leaders that do not make a decision cause chaos for those under them and when they fail to make a decision, it tends to make simple things worse.”

Burney-Divens continued, “I value everyone’s opinion. I am transparent and straightforward and make every effort to be consistent. I am extremely energetic; sometimes to a fault, because I tend to overdo it.”