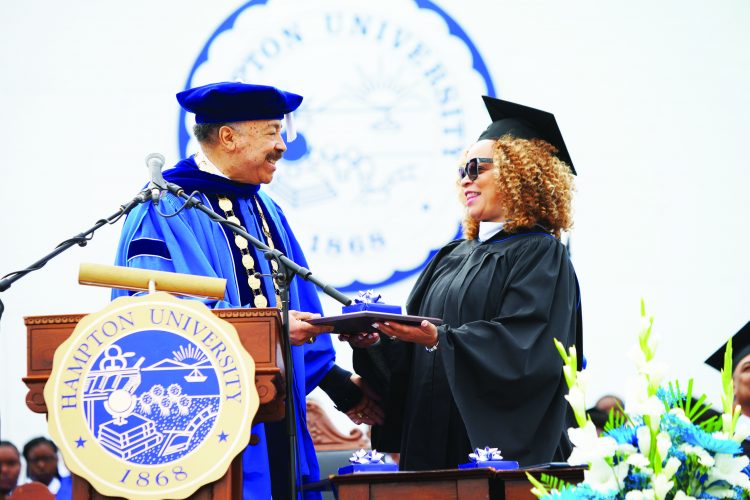 About 19,000 people heard Carter, a 1982 Hampton graduate, speak in the Armstrong Stadium. The American costume designer for film and television has over 40 films to her credit, including the movie, “Black Panther” directed by Ryan Coogler. She also designed the costumes for director Spike Lee movies’ “Malcolm X” and “Do The Right Thing.”

“What I want to emphasize today, is the importance of our Afro-future,” said Carter, the first African-American woman nominated for an Oscar in costume design.

“Our Afro future that was first born with the vision of our first teacher here at Hampton, Mary Peake,” Carter said. “She engaged former slaves who at one time didn’t have a choice, and who ran and fought for freedom. She authored the choice of education under The Emancipation Oak and when she did that she planted seeds of freedom in all of us, so that today we can dream in these distinguished costumes of education.”

Carter earned her bachelor’s degree from HU in 1982, but never officially received her diploma. At the recent event, President William R. Harvey presented her degree to her after 36 years.

Harvey told the audience, “Don’t be common or ordinary. Be extraordinary and dream no small dreams.”

Valedictorian Payton Irene Newsome said to her classmates at commencement, “On this day May 13, 2018 we can finally press the reset button again. Today is our new beginning; today we have new endeavors, challenges, and opportunities. Today class of 2018, we step out of our comfort zones and let life begin.”

The following awards were also presented at Hampton’s recent commencement: