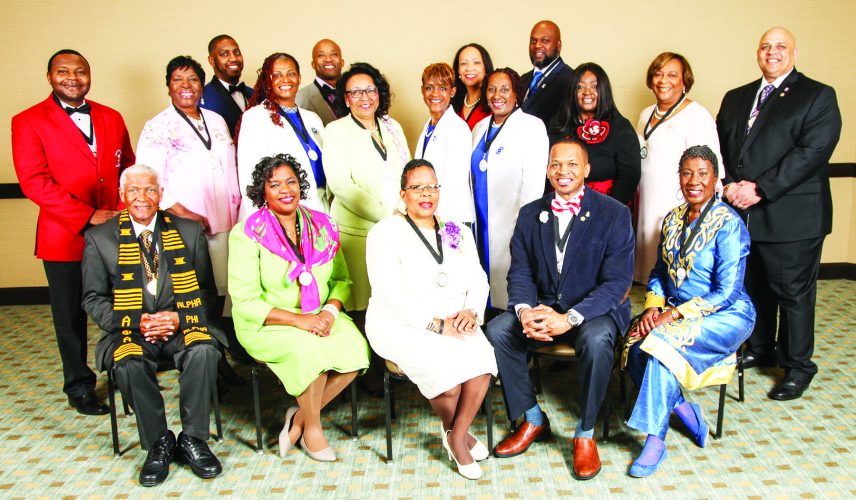 The South Hampton Roads Pan-Hellenic Council – SHARPC – recognized the performance of members and community leaders at a banquet held on March 17 at the Holiday Inn Virginia Beach – Norfolk. This marked the thirtieth year for the event. More than 300 supporters gathered to honor selected members of the nine historically Black Greek letter organizations.

This milestone program opened with past heroes being saluted as they paraded into the banquet hall. Terry Caldwell of Alpha Kappa Alpha Sorority and Vincent Epps of Kappa Alpha Psi Fraternity held down the mic as co-masters of ceremony. SHARPC presented its 2018 Community Service Organization Award to Teens With a Purpose for long-time involvement in developing creative programs that develop youth and intersect with civic engagement. It nurtures the artistic talents of teens as well as leadership skills. TWP is celebrating its 20th year and the award was accepted by long-time director, Deidre Love.

SHARPC presented its Divine Nine Award for community service by a Black Greek to Nicole Brown-Griffin. This member of Delta Sigma Theta Sorority was recognized for her work as a financial coach for unbanked and under-banked citizens in the local area. Through Bank On Hampton Roads, she educates clients on how to develop financial literacy and goals that meet their personal needs and those of their families. A $1,000 SHARPC scholarship was presented to Genesis McDaniels, a Junior Social Work major, with a minor in Psychology, at Virginia Wesleyan University in Va. Beach. She is a member of Zeta Phi Beta Sorority, Inc.