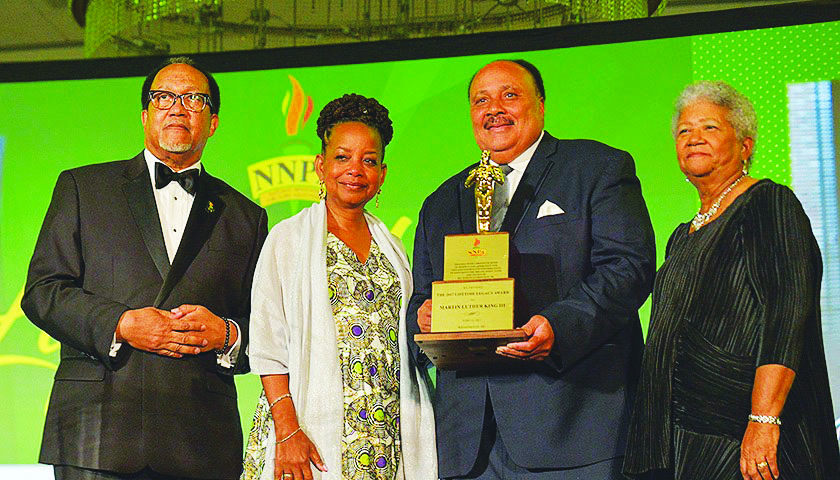 The National Newspaper Publishers Association (NNPA) honored Martin Luther King III with the 2017 Lifetime Legacy Award, as the group wrapped up its annual summer conference, at the Gaylord Convention Center at the National Harbor in Maryland.

King, the oldest son of the iconic civil rights leader Martin Luther King, Jr., said that the tribute tops all others he’s received, because the Black Press has meant a lot to his family, especially his father, as he fought for freedom, justice and equality.

King continued: “The Black Press provides the information that’s needed for African-Americans and if not for the Black Press, I would say that, during the Civil Rights era, my father would not have been successful. The African-American [journalists] had their ears to the ground to what was important in our community.”

King, who attended the awards ceremony with family members, graduated from his father’s alma mater, Morehouse College, with a degree in political science. While at Morehouse, King was selected by former President Jimmy Carter to serve in the United States delegation to the Republic of Congo for participation in their centennial celebration ceremonies.

Like his father, King participated in many protests for civil rights and one of the more notable acts of civil disobedience came in 1985 when he was arrested at the South African Embassy in Washington, D.C. protesting against Apartheid and for the release of freedom fighter Nelson Mandela.

“This is a special time,” King said, as he spoke to NNPA members, friends and industry leaders in attendance at the award ceremony.

Showing a lighter side, King quipped, “I like the word ‘legacy,’ but it means you’re getting older.”

King also talked about the impact of social media and how it can be difficult to understand the shorthand that some young people use to communicate via text and social platforms like Twitter.

“I have to ask the kids to tell me what these things mean, because I don’t do Twitter or Facebook,” he said.

Striking a more serious tone, King, the former president of the legendary Southern Christian Leadership Conference, said that the Black community “must do better.”

King continued: “We have to educate our community. We, as a community, have the ability to do much more.”

In an effort to help African-Americans realize and capitalize on the vast spending power in the community, King founded Realizing the Dream, a foundation that is focused on helping community-based organizers to ignite investment in local neighborhoods and to foster peaceful coexistence within America and abroad.

“If we decide to divest, or even talk about [boycotting] some of the companies where we are spending billions of our dollars…we won’t see insensitivity,” King said.

Dr. Benjamin F. Chavis, Jr., the president and CEO of the NNPA, said that the organization was especially proud and delighted to present the prestigious award to King.

“For decades, more than anyone else, Martin Luther King III has continued to personify and represent the living legacy of Dr. Martin Luther King Jr. for freedom, justice and equality,” Chavis said. “He has carried on his father’s legacy quite honorably, quite admirable, and quite successfully.”

In 2008, as former president and CEO of the King Center, King spoke on behalf of then-Democratic Presidential Nominee Barack Obama at the Democratic National Convention, where he highlighted the need for improved health care, quality education, housing, technology and equal justice.

The Board of Directors for the Drum Major Institute for Public Policy and co-founded Bounce TV, the first independently-owned, digital multicast network featuring around-the-clock programming geared towards African-Americans.

“I remember going to my mother’s alma matter in Ohio and seeing the statue of Horace Mann which was inscribed with the words ‘be ashamed to die until you have won some kind of victory for humanity,’” King said.

King continued: “I say, be ashamed to die until you have done something to make your community better.”