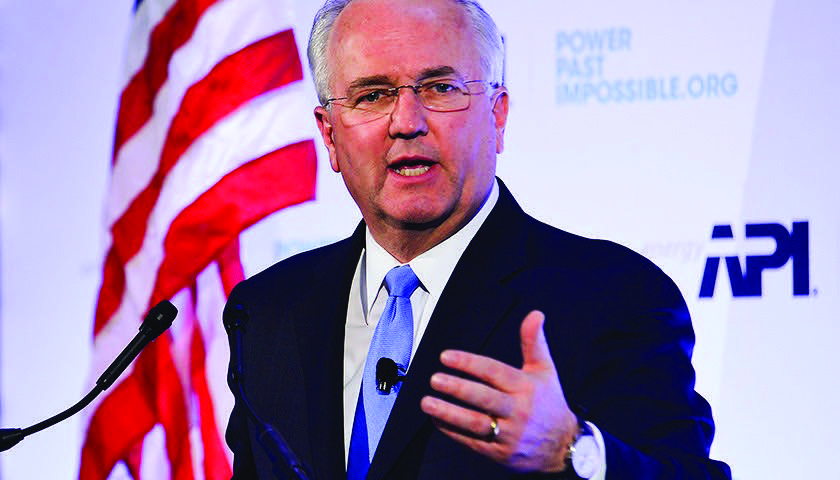 Jack Gerard, the president and CEO of the American Petroleum Institute, said that there are incredible career and business opportunities in the petrochemical industry and he’s committed to increasing awareness about those prospects in the Black and Hispanic communities.

API is a national trade association that represents all facets of the oil and natural gas industry, according to the group’s website, and its membership includes “large integrated companies, as well as exploration and production, refining, marketing, pipeline, and marine businesses, and service and supply firms.”

In 2015, the natural gas industry supported more than 4 million jobs across the U.S. “from production to end uses such as manufacturing,” the State of American Energy 2018 report said. “The number is expected to rise to 6 million jobs by 2040.”

Gerard said that if you look at the energy industry, in general, there are still emerging opportunities for new job creation, low-cost affordable energy, and export markets.

“The sky is the limit, to some degree, in our ability to expand and grow and I think that’s exciting, particularly from the job perspective side,” said Gerard. “What we’re trying to do is broaden our base particularly in the Black community about the opportunities that are available.”

That’s why Gerard has committed to speaking to students at historically Black colleges and universities (HBCUs) to dispel some of the myths about the petrochemical industry; some believe that many of the jobs are on oil rigs in Texas or Oklahoma.

“We’ve got to find those partnerships, everything from individual students, who are just rising up to begin to consider their own careers, to small businesses to opportunities all the way up to the C-suite,” said Gerard.

People who work in the oil and natural gas industry are engineers, accountants, and designers; they work in marketing, finance and transportation, Gerard said

Gerard said that the Black Press can play a number roles in educating the Black community about the opportunities in the oil and natural gas industry.

“We need to identify African-American leaders currently in the oil and natural gas industry and profile them; let them talk about their successes, let them share their stories with others,” said Gerard. “We also have to continue our efforts to reach out and educate the community so that people just don’t think that [only a handful of people] got lucky. No, no these opportunities are for everybody.”

The president and CEO of API also said that the oil and natural gas industry must do a better job with communicating a clear message about the impact of the industry on everyday life.
The 2018 State of American Energy report noted that everything from artificial heart valves and air bags to seat belts and astronaut’s space suits are made with petroleum-based products.

Gerard added that the contributions of the oil and natural gas industry extend to the ubiquitous smartphones that millions of Americans use every day.

Gerard said that it’s important that African-Americans turn their focus toward the oil and natural gas industry, because the career and business opportunities will only continue to grow.

“We’ve got a lot of African-American groups that are a part of our strategy to better understand those interests and secondarily how to communicate and educate [the Black community] about those opportunities,” said Gerard. “We just have to stay at it; we have to persevere. We can’t get frustrated after six months, and say ‘well, its not working as fast as we would like it to.’”

Gerard continued: “These are long-term objectives. We’re already gaining some traction. These are generational challenges that don’t [change] overnight. We’ve got to keep pushing the understanding and the opportunity in the African-American community.”