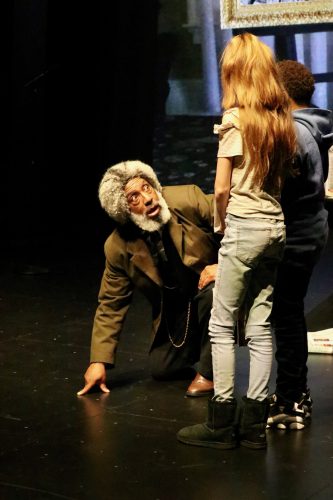 The African-American Cultural Center, Inc. (AACC) hosted an Evening With Frederick Douglass at the Zeiders American Dream Theater on Friday, March 29. The evening included a reception and the impersonating skills of national renowned author and poet Nathan Richardson in character as the historic Frederick Douglass.

The AACC is a non-profit organization that is in the campaign fundraising stage to build a historical and cultural center dedicated to collecting, preserving and celebrating Hampton Roads’ and Virginia Beach’s African-American culture and community from the mid 1600s to present day.

The event was one of several fundraisers planned by the board.

Recently, AACC hosted the unveiling and dedication of Portraits from a Place of Grace, a public art installation on at the site of its future home on Newtown Road. The artist Richard Hollant was on hand along with AACC members, supporters and city officials.