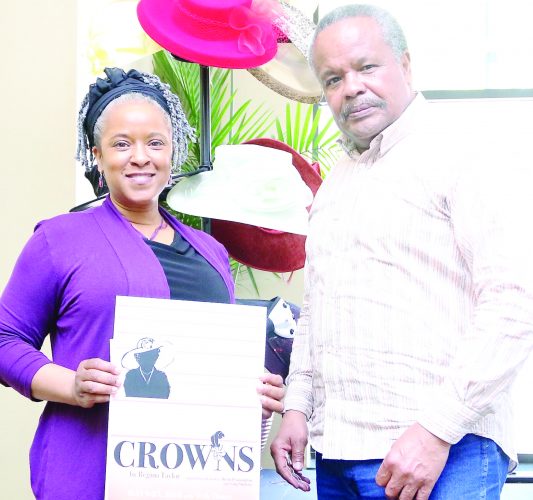 That the Virginia Stage Company’s production of Regina Taylor’s “Crowns” is opening just prior to Mother’s Day, is sure to engender special meaning to much of the audiences in attendance. It is certain to be of singular importance to busy actress T’Keyah Crystal Keymah, who portrays “Mother Shaw.” Like the Brooklyn teen protagonist that is also featured in this award-winning drama, Keymah went to live with her grandmother, following a family tragedy. For the gifted actress, it was the loss of her own mother at the tender age of 2.

Keymah added, “She’s a little bit of the African women I met in Africa. To me, she is the symbol of the unification of Black women.” And when it comes to crowns, both the hair that adorns one’s head, as well as the hats that African-American women wear, the socially-aware actress defers to the essence of natural culture.

Author of the popular book “Natural Woman/Natural Hair,” Keymah noted, “One of the things that’s discussed in this show is how African women are African, wherever we are. Even if we don’t call ourselves that, we do things that African women do by instinct. For us, with hair, we went through a whole other thing, where our hair was called dreadful, deplorable, unattractive, despicable, uncomable, unmanageable.” With some chagrin, she submitted, “We bought into that.” After a brief pause, she noted, “Some of us.” It felt like a fitting punctuation mark, beckoning growth.

“Hats were always a part of that crown, which became even more important,” she said, “because you can say, ‘Say what you want about my hair, but this is the same hat you’re wearing lady.” Keymah then chuckled freely and added, “This is the same hat you wish you could wear like I can wear it.”

T’Keyah Crystal Keymah has an infectious, joyful spirit. She is down-to-earth, charismatic, and quite comfortable in her being. Her eyes reveal a youthful spirit that thirsts for wisdom, adventure, jubilation. She is ever-ready with a smile, chuckle, grin or burst of contagious laughter.

Keymah’s career spans some 30 years and your favorite show to catch her in depends on your age. She created a host of rib-tickling characters in the popular sketch comedy program “In Living Color,” including “Cryssy” of “In Black World.” She also portrayed Erica Lucas Hall, a flight attendant-lawyer-pastry chef-teacher, on “Cosby.” She appeared as “Tanya Baxter,” Raven Symone’s mother, on the sitcom “That’s So Raven.” She also was featured in the programs “On Our Own,” “The Show” and Damon Wayans animated series “Waynehead,” portraying 12 different characters.

Keymah’s youth might be defined by a few profound awakenings. Born Crystal Walker in Chicago, she learned that she shared the same last name of then Illinois Governor Dan Walker, a white man. While still a child, she was excited to discover that he had launched a political campaign with the slogan Walk for Walker. “I remember so clearly telling my grandmother,” Keymah recalled, “‘Oh we have to go out and walk for walker, because he is a relative.’” Her grandmother simply gave her a look and then calmly told her, “Sit down.”

“That was the coming of age for me …” Keymah said, “the coming into reality for me about what names meant. I got really, really angry. I felt like Dan Walker had personally tricked me into thinking I was aligned with him in some way. And I thought, as a child, no child of mind will be tricked like that.”

So she began a search, not so much for a new identity, but to dispatch, as best she could, the vestige of bondage that still clung to her.

Eventually, she happened upon Ben Ammi Ben-Israel’s book “God, the Black Man and Truth.” She noted that, “Each chapter was defined with words and the chapter on Resurrection was defined by these three words: T’Keyah, Keymah and Akacha. “T’Keyah and Keymah were the correct energy for me,” she said.

T’Keyah means “Mental Revival of the God Spirit.” Keymah means “To establish oneself.” To be in this attractive actress’s presence, if even but for a moment, you’d know each name is wholly appropriate.

“I chose the names and held onto them for years,” Keymah remembered, “so I could give birth to them. When I was in the process, that’s when I shot the pilot for ‘In Living Color and I didn’t want to rush and give them my new name because I hadn’t given birth to it yet. But between the summer of ’89, when we shot the pilot, and the winter of that following year, when the show got picked up, it had all become official. I actually got my new birth certificate on my birthday.” It was an incredible affirmation. Keymah exclaimed, “Yeah! I knew I was right!”

When it came to selecting roles. Keymah said, “My grandmother has always been my bar. She still is. Before, it was when I tell her what I am doing, if my head would be up or down. Now, it’s when I think if her head be up or down.” No doubt her grandmother would give her a crown for “Mother Shaw.”

Directed by Raelle Myrick-Hodges, this “Crowns” cast also features Norfolk State University sophomore Ja’Keetrius Woods as “Yolanda,” NSU alumna Meredith Noel as “Jeanette,” Derrick Cobey as “Man,” Sheila Lee as “Mabel,” Amma Osei as “Velma,” and Nicole C. Julien as “Wanda.” This is quite a talented ensemble. You can rest assured they will bring “hattitude.” The production runs through May 27. If wearing your own crown to the show, you’d surely tip it at the curtain.