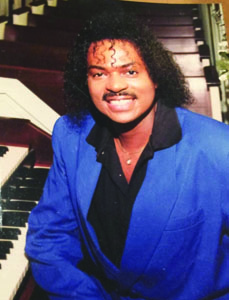 By Dudley Colbert
Special to the
New Journal and Guide

His was a kindred spirit. Willing to accept the inevitable. Open to the thoughts and opinions of others. He turned the other cheek and accepted you as you were. His was not a braggadocios spirit. His gifts were not painted on his sleeve.

He was an exponent of his Blackness and showed it to us through his music, poetry, and art. This does not mean that his talent was limited to just that; his work spoke to the universe of mankind and humaneness. He walked alone, but he walked with all of us who knew him deeply.

He was a spiritual man. The spirit of God, the inner soul and righteous piety were seminal to his being. He did not announce his Christianity through shouts and bombast, but he did share with those in need, even when he might have been in need himself; he broke bread with the outcasts and turned the other cheek to the hatefulness and meanness of others; he offered encouragement and praise to those less gifted than he was. To criticize was not his forte. He treated people with kindness and respect.

He loved his church, Mount Zion Baptist Church and its pastor, Reverend Hart and his wife Shirley. Michael would reward you with unexpected small gifts of various sorts, with thoughtfulness and sincere words imparted in them, that no larger ones could ever surpass.
Imagine yourself in a crowd of people and having your hand of friendship rejected by one of the “high and mighty” who knew you.

One who then said to you, “Who are you, I don’t know you.” Michael, the pious one, who had just foretold the possible outcome to me, walked away, head held high. Knowing what that person stood for, he continued his evening in high spirits and laughed the night away. He was not angry. He was a spiritual man.

The twists and turns of life are not foretold to us. As a teenager growing up on Alleghany Street in Berkley and frequently seeing three young children playing in their front yard – and never leaving it as some children might disobediently do – it never would have occurred to me that one of those children would turn out to have the genius of Michael Raphael. I did not know their names. The other children were his sister Lilyn and his brother Lathan, who is a blues guitarist in his own right.

While I was taking piano lessons from a lady named Mrs. Diamond, our paths crossed again. She was his next door neighbor. I still did not know him. In 1990 on my return to live in Norfolk, one of my childhood friends, Sule (Otis) Alexander, asked me if I knew Michael Raphael. He said, “Michael is a genius, you have to meet him.” I did, and we remained friends until he departed this life in November.

In my mind, he lived up to Sule’s billing. By the age of six, his musical talents had already been discovered. Mr. Carl Clark, his band teacher in middle school, saw his genius and served as a mentor and close advisor to him until his passing. He studied with his first piano teacher Mrs. Sara Hathaway until he was 16 years old and then she encouraged him to audition for The Virginia Music School, and he was accepted. With his determination to become a composer, he enrolled in the prestigious Cincinnati Conservatory of Music of Cincinnati University and received his degree in Music Composition.

His work ethic was unparalleled. It harkened back to the earlier days of past composers – Michael would sit at his desk and meticulously write out his scores by hand – this in the age of the computer. A year ago, he decided to use one and was pleased with the results it produced. His great joy was that he could hear all the notes he had composed in totality in real time. He loved what he heard, but being Michael, it was in modest jubilation. In addition to composing, he was the librettist for all of his works.

He was a gifted artist, too. From his composing desk, he was able to turn in his chair and work at his easel. By the age of six, his talent for art had been discovered as well as his musical talent. According to his sister Lilyn, on an occasion when their mother did not have a babysitter for him, she took him to her class at Norfolk State with A.B. Jackson, the distinguished Virginia artist. He saw Michael drawing and recognized his talent. He invited Mrs. Hill to leave Michael with him so that they could draw together, while she attended her other classes.

The first meeting of Michael and internationally acclaimed bass Kevin Maynor was momentous unto itself. Mr. Maynor’s voice is the personification of that of Paul Robeson. He related the story to the congregants at Michael’s funeral.

At a Lincoln Center Concert in New York in the 1990s, he said that he was sitting with a well-to-do patron of the arts, and one of Michael’s piano pieces was being played. The patron was so enthralled with the quality of the work that she told him he should find a way to help that composer. He was not sure what he could do, being somewhat new to the classical field himself. Little did he know that he would later find a way and play a major role in Michael’s career.

On one of the occasions when he later visited his aunt here in Norfolk, she told him there was a brilliant local composer she wanted him to meet. During their conversation at her house, Mr. Maynor realized that the composer, whose piece he had heard at Lincoln Center, was standing right in front of him. They discussed the first opera Michael had written, “Nat Turner,” and the possibility of staging it. Kevin returned to Newark, New Jersey and sought out support for it. Through a compromise Mr. Maynor worked out with various Newark officials, Michael was commissioned to write the opera, “The Three Mayors.” The production of “Nat Turner” would follow.

As a result of these two productions, Trilogy: An Opera Company was born in 2004. Mr. Maynor credits Michael for this achievement because it was his request to him to produce “Nat Turner.” At no point up until that time had he considered or thought about starting an opera company. Michael’s vision and talent inspired him to fight for the opportunity to start one of the few African-American opera companies operating in America today.

Its significance is that its artistic efforts are devoted exclusively to producing the stories of historic African-American heroes and heroines through the music of African-American composers. Michael was honored to have written several pieces for the company, more than any other composer it has used. His last work for Trilogy was the opera “Garvey,” which had its premiere on November 22, 2015, just a week before his death.

He played for many churches. He was ever vigilant to play what they wanted or rehearse three choirs if requested. He was loyal to the church family at Eastern State Hospital in Williamsburg for over twenty years. He even traveled there when he was ill. On various occasions when the minister was not present, he conducted the service for the patients and staff. It was more than just a paying job to him.

Michael was a movie aficionado, a historian and a voracious reader. Marilyn Monroe, Dorothy Dandridge and history were some of his favorite subjects, along with his musical interests. He loved Whitney Houston, finding her to be one of the world’s greatest singers, second only to his absolute favorite, Leontyne Price. He had a collection of all of her recordings. Patti Labelle and Luther Van Dross were others favorites. He knew Jazz. His Jazz Hymns CD with Kevin Maynor was critically acclaimed and sold worldwide.

One of the local highlights of Michael’s career was the showcasing of some of his music to the Hampton Roads community, during a concert celebrating the 25th Anniversary of the Southeastern Virginia Arts Association (SEVAA). Mr. Maynor brought his production of “The Spiritual: An Underground Railroad to Wilder Auditorium at Norfolk State University and devoted the second half of his program to arrangements by Michael. He was accompanied by a full orchestra and chorus, led by Geraldine Boone (conductor) and Dr. Patricia Saunders Nixon (Choir Director).

The most lasting memory indelibly imprinted in my mind in regards to his musical career is that of his concert at the Basilica of St. Mary of the Immaculate Conception in the early 1990s, which he produced himself. His orchestra executed the concert ritual to perfection.

Afterwards, he entered from the wing dressed in White Tie and Tails, majestically took his place in front of his orchestra, raised his baton and led his handpicked musicians to a glorious afternoon of compositions by the illustrious Maestro Michael Raphael. In true Michael fashion, he was understated in his elegance.

Dudley Colbert is the head librarian at the Norfolk Blyden Branch Library.