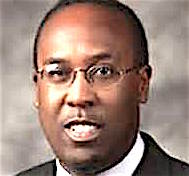 A jury took three hours to find Portsmouth City Councilman Dr. Mark Whitaker guilty of three counts of forgery. The verdict came on the third day of his trial and 14 months after a special grand jury indicted him on 20 various felony charges.

The jurors’ verdict on July 18 recommended that Whitaker not serve any time and that he would pay $7,000 in fines.

Whitaker throughout the ordeal has maintained he is innocent of any of the charges.

His lawyers vowed to file a motion to set aside the verdict and Judge Harold W. Burgess, Jr. will decide what sentence he will impose on Whitaker on September 26.

Whitaker could have served up to 10 years per count.

The Portsmouth NAACP, stating that the charges against Whitaker are politically motivated due to a political dispute between the councilman and former Sheriff Bill Watson, will ask the State Attorney General to investigate the case.

The case against Whitaker is based on a series of loans from a credit union run by New Bethel Baptist Church where he pastors, dating back to 2013.

The prosecution contends that the church’s development company bought an old apartment building which sat near the church and planned to tear it down because it was in disrepair.

But the church did not have the money to conduct the razing and the city was demanding the church to knock it down.

According to court documents, the credit union approved $35,000 in loans to pay a company, United Disposal, to do the work. Whitaker was chair and board member of the credit union.

The loan money which was paid back, according to prosecutors, was paid to Whitaker, his brother Phillip Whitaker, James Whitaker, his father, and Etta Pierce, his sister, and the church.

Loans were made, according to court documents, to contractor Kevin Blount and his company Valor Contracting, which no longer operates.

Whitaker said, after the trial, that he will remain on Portsmouth City Council, despite a new state law stating that government officials, found guilty of state or federal felonies, must be suspended from their duties.

But Whitaker may be able to remain in office until Judge Burgess imposes a sentence.