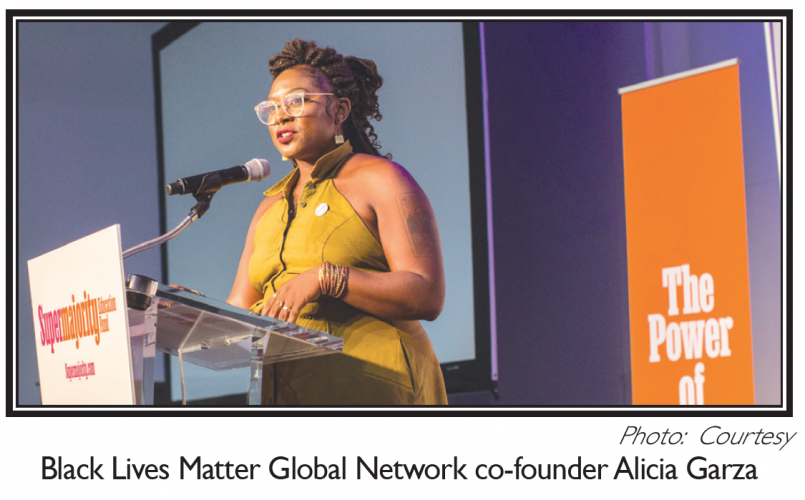 African-Americans, and women in general, vote at a higher rate than any other group. They are half of the U.S. population and the leader of a majority of families with children

But women face historic disparities in income, employment, and control of their healthcare needs by the current presidential administration elected by a majority of white women, ironically, in 2016.

The day after Donald J. Trump was sworn in as President, the largest political demonstration by women was held in the streets of the national capital.

That event ignited a backlash against the policies, and included the election of the largest number ever of women to the U.S. Congress.

It also led to the creation of the “National Supermajority” movement, fueled by the mobilization, training and political activism of women.

Organizers of the movement launched a 14-city tour across the country to engage millions of women in 2019 and 2020 national and local election cycles.

On September 15, the 2.5-week tour kicked off in Atlanta, Georgia, hosted by Stacy Abrams. Her failed effort to become the first Black governor is one of the factors igniting the Supermajority movement, according to its leaders. It concludes on October 2 in Las Vagas.

“No longer will we accept what has been decided for us and expected of us,” said Garza. “Women, and particularly women of color, are being held back by a system that wasn’t made for us. But women are the new face of power in the United States and we will ensure our leaders and our national priorities reflect that.”

Voter education on the issues which promote women is one of the aims of the movement.

While in Hampton, organizers rolled out the five Majority Rules; a new vision for how women will live, work, secure equality and rise together.

1: The lives of women are safe, free of fear, intimidation, and violence at home, at work and in our neighborhoods – no matter where we’re from, whom we love or how we identify.

2: Their bodies are respected and the health care system takes women’s needs seriously, from treatment to research to women making decisions about if and when to start a family.

3: Their work is valued and women are paid equally for work and get promoted equally too. The jobs primarily done by women – from teaching to caregiving – are valued and supported. All women can retire with dignity and enjoy the life they worked hard for.

4: Their families are supported and should no longer be forced to make impossible and unfair choices between family and work. Providing the best care for our families, from infancy to old age, is possible and affordable for all of us.

5: Government will represent them from the school board to the White House, women are represented. The right to vote is protected and promoted, all voters have access to the polls and every vote is counted.

Organizers said the Rules were formed by listening to tens of thousands of women through in-person discussions, focus groups, online polling, and targeted research, including more than 60,000 women who took The Women’s Poll. The Majority Rules anchor the organization’s work to influence the public debate and serve as the rallying cry for millions of women, no matter their background, race or generation.

In the Virginia General Assembly, all 100 seats in the House and 40 in the Senate are up for election this year in November.

Democratic party leaders are relying on women and African-Americans, in general, to give them the electoral support to secure control of the legislature.

With Democrats control of the General Assembly and the governorship, it will control the upcoming redistricting process and the progressive laws passed relative to healthcare issues, abortion, and civil rights.

“Women’s equality is not negotiable,” said Richards. “With the Majority Rules, we will ensure our leaders – in government, in business, and in our communities – make the issues we care about a priority. When women come together, we are unstoppable.”

During an interview with the GUIDE, Garza said, “Politicians are not afraid to disappoint women.”

“Although we are over half the population, vote at a higher rate than any other groups, especially Black women,” said Garza, “ men are still deciding for women, without consideration and input from women.”

Garza said the effort to marginalize women was taking place before the election of Trump. But his election, policies, and appointments of two conservative Justices to the Supreme Court has energized the women’s political movement.

“Women are pissed off and on fire,” said Garza. “His (Trump’s) election was a clarion call to action. We have a sexual predator in the White House who is telling women that your story of abuse no longer matters. But it does and we are building a movement and a community to mobilize ensure our voice and vote does matter.”

For more information go to https://tour.supermajority.com/educationfund.

Follow us
In this article:Female Vote, Super Majority, Vote, Women