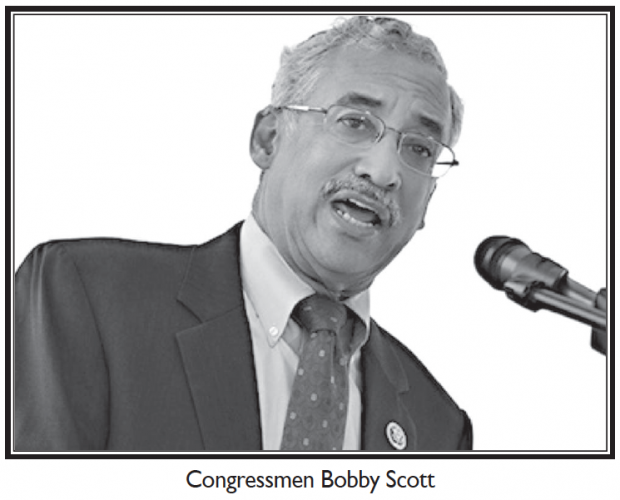 Those distractions lead the media and others to take their eyes off what’s vital to everyday life, particularly for African-Americans, said Scott, the chairman of the House Committee on Education and Labor.

His committee voted last month in favor of the Rebuild America’s School Act that would provide about $100 billion for school infrastructure and Scott and his colleagues also advanced the Paycheck Fairness Act which toughens penalties that businesses face for gender-pay disparities.

“In 1954, the Supreme Court ruled that it is doubtful that any child may reasonably be able to succeed in life if denied an opportunity of an education; that such an opportunity is a right that must be equal for all,” he said.

The congressman’s comments and the advancement of the Rebuild America’s School Act comes as a new report revealed that white school districts receive $23 billion more in funding than non-white districts despite serving the same number of students.

The report highlighted that despite more than a half-century of integration efforts, the majority of America’s school children still attend racially-concentrated school systems.

Authors of the study said that’s a reflection of the long history of segregation with policies related to everything from voting to housing that have drawn lines and divided communities.

Because the school system relies so heavily on community wealth, the gap reflects both the prosperity divide in America and the fragmented nature of school district borders, designed to exclude outside students and protect internal advantage, according to the report’s authors.

Adam Clayton Powell spearheaded legislation in the 1960s that put more money into low-income areas and the Higher Education Act passed under President Lyndon B. Johnson that assured that no child would be turned away from college because he’s poor, Scott said.

“Then there was the Pell Grant which assured that a child could go to any college and not incur that much debt. You can have equity in K-12 but you’ve got to have Head Start … and we have to make sure that legacy continues,” he said.

Scott reiterated that Americans’ focus needs to change from indulging in the soap opera that has resulted from past actions of the current Virginia governor, lieutenant governor and attorney general as well as Trump.

After a hearing that resulted in the advancement of the Paycheck Fairness Act, Scott said reporters cornered him.

“Not about education or the Paycheck Fairness Act,” he said.

Scott said public schools in the U.S. are at a literal breaking point and noted that one estimate found that school infrastructure is shortchanged by $46 billion every year.

Reportedly, Scott’s bill has 164 co-sponsors in the House, and all of them are Democrats, although Scott said when he introduced the bill that he believes the proposal has bi-partisan appeal.

With the Paycheck Fairness Act, the bill removes many of the legal defenses that businesses use to claim that they aren’t discriminating and makes it unlawful for businesses to inquire about a worker’s wage history or use it as a hiring factor if they know, among other provisions.

“Our challenge is to try and ignore all of the distractions and do what I’ve done [getting important legislation advanced]. [The Black Press of America] is the only place you will read that these great things are happening because all the other news outlets will report on distractions.”