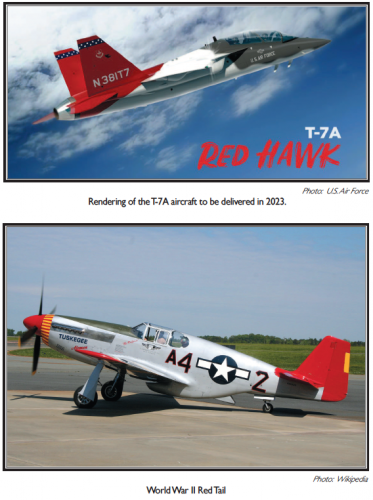 Although the oldest surviving member of the original Tuskegee Airmen, Willie Rogers of St. Petersburg, Fla., died at age 101 in 2016, memories of the famed World War II pilots will live on when the first jet named after the group takes flight.
The Air Force has announced it will name its trainer jet, the Boeing T-7A after the historic pilots of color, who fought in more than 200 combat missions and never lost a single bomber to enemy fire. The first Boeing T-7A trainer and stimulators will arrive at Joint Base San Antonio in Randolph, Texas in 2023, according to news reports.

Other bases that will eventually transition to the new trainer include Columbus Air Force Base, Mississippi; Laughlin and Sheppard bases in Texas; and Vance in Oklahoma.

The T-7A, the next-generation trainer jet for the Air Force will be known as the Red Hawk and carry the same signature red-tail markings that these fighter pilots used during World War II.

“The name is also a tribute to the Curtiss P-40 Warhawk, an American fighter aircraft that first flew in 1938 and was flown by the 99th Fighter Squadron, the U.S. Army Air Forces’ first African-American fighter squadron,” he added.

Starting June 2, 1943, Tuskegee Airmen flew more than 15,000 individual sorties in Europe and North Africa during World War II. In 2007, former President George W. Bush welcomed the Tuskegee Airmen’s 300 surviving members to the White House and awarded each of them the Congressional Gold Medal.

Neither Rogers (the last surviving member of the original group) nor his daughters, Felicia Rogers and Veronica Williams, attended the ceremony, and they didn’t even know about their father’s participation with the group until 2012.

Six years later in November 2013, Rogers received his Congressional Gold Medal. Besides that award, Rogers’ portrait was placed in the St. Petersburg Museum of History, and he received the keys to the cities of Lakeland and St. Petersburg, Fla.

Follow us
In this article:Air Force, Boeing T-7A, Tuskegee Airmen