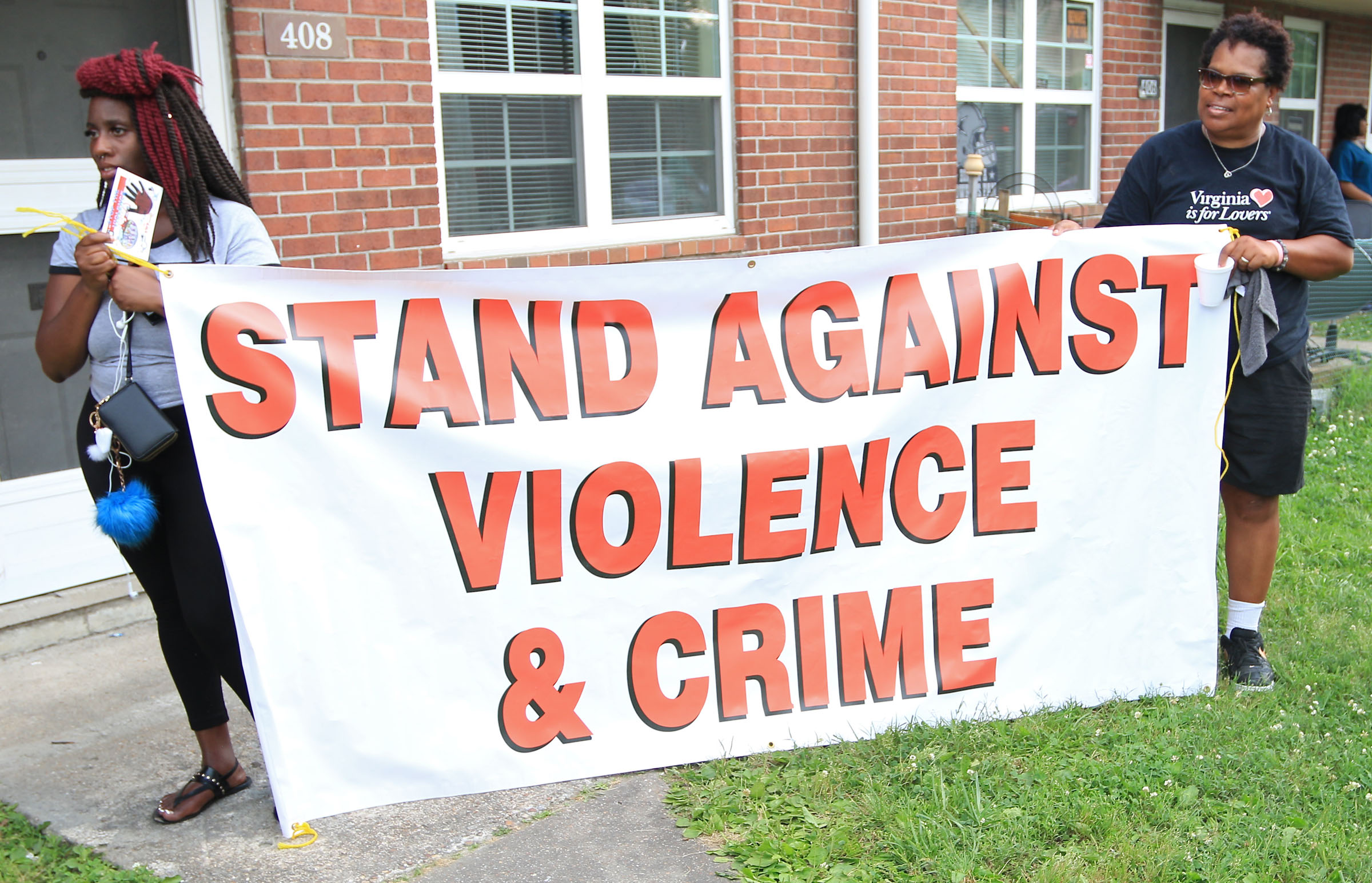 The front door on the home where Willie D. James was shot and killed by Norfolk police on Thursday night, June 2 opens a few feet from the interior stairwell. There is just a little room to turn around in the entrance area that leads up the flight of stairs if you keep straight or into the living room if you turn left. On Friday evening, one day later, the open front door on the home in the 400 block of Chapel Street was still bullet-riddled, as was the wall behind it when residents and friends of the household recalled events as they remembered them from Thursday night. Bullet holes were evident in both high and low positions on the door and on the wall behind it.

A handwritten sign outside of the house gives the name of “Meek” in a tribute to the deceased, who was called “Meek-Meek” by those who knew him. Red and blue balloons and white candles are on display nearby. The tragic day was like any other day for Willie Demetrious James, 43, who was out walking in the Tidewater Gardens public housing neighborhood when he observed a police car parked outside of his sister’s Chapel Street house. Two police officers were in the area to investigate a stolen vehicle, unrelated to the James family.

It is unclear why James became agitated and believed the police were in the neighborhood on his behalf, but it was common knowledge that he had a lengthy history of mental health issues. Witnesses said he ran into his sister’s house where he assaulted family members, accusing them of calling the police on him. The two police officers outside the home then were summoned inside the home to quell the disturbance. In the meanwhile, James had retreated into an upstairs bedroom.

Witness and police accounts differ on the sequence of events that quickly turned deadly after that. One thing they do agree on is that Willie James was on the stairs when one officer, Vernon Dozier, fired at him, and that when Dozier’s gun seemed to jam after three rounds, the second officer began to shoot. When the gunfire ceased, witnesses say “Meek-Meek” was dead, and police dragged him by his feet out of the front door to be placed in an ambulance and taken to the hospital and pronounced dead.

The police account says both officers tried to give first aid to James until medics arrived to take him to the hospital, disputing witness claims that no CPR was administered by the officers. Reaction to James’ death was swift from the Norfolk community, including City Councilman Paul Riddick, who held a press conference on Friday where he called for an FBI inquiry into the case that is being investigated by the Norfolk Police Department.

“It’s not a racial matter; it’s race and class,” Riddick said during his press conference. He represents the 4th Ward where the killing occurred in the public housing community that is mainly African-American. Michael Muhammad, who called for a public rally within 24 hours of the shooting death, agreed. “You have to understand the mentality (of some people) that poor people and people who live in subsidized housing don’t have the same rights as other citizens,” he said.
“We must stay focused on our goal – a federal probe of police-involved shootings in Norfolk,” he urged to the crowd of neighbors that gathered on the Chapel Street lawn to rally for justice for Willie James.
Muhammad is a community activist who has been out front in bringing attention to other fatal police-involved shootings in Norfolk. He called the current process of police investigations ”flawed,” noting that Norfolk Police Department Chief Michael Goldsmith spent 15 years in Norfolk Police Department Internal Affairs prior to assuming his current position in 2012. “Internal Affairs is where complaints go to die,” said Muhammad. Prior to the rally’s beginning, family members and friends spoke with the media about the events of Thursday night. Family members said police officers knew their family, and the family knew Officer Dozier. They said Dozier knew Willie James, knew of his mental instability and had been called to the home on other occasions. Friends Sylvia Riddick and Josette Horn and James’ sister Shelia Beard said they were in positions to witness first-hand the mayhem on Thursday night.

They agreed that officers were at the foot of the stairwell and James was at the top. James was ordered to come down, said Roddick. Riddick said James then jumped to the fourth step and when he did, Officer Dozier began firing his gun which jammed after three shots. The second officer, who has not been identified, then stepped around Dozier and began firing, she said.

The police account is that James lunged at police with a knife which caused the officer to respond by shooting his gun. On Friday, a photo of a knife was released by police as the weapon James allegedly had brandished. Also, on Friday, police announced a video that was recorded on the body camera of the second officer which shows a man holding a knife coming within two feet of officers when the first shots rang out. Chief Goldsmith allowed the viewing of the video by Norfolk NAACP President Joe Dillard and two other NAACP officials. While Dillard confirmed the video’s contents, he said it was hard to tell whether James was threatening the officers.

The witnesses said they never saw a knife and that police only ordered James to “Come downstairs! – never Drop your weapon!” Standard police procedure is to order an assailant to drop their weapon before shooting begins. Further, the knife that is being shown by police, according to those being interviewed for this story, was dull and came from the kitchen drawer where it had been placed after being used the day before.

The witnesses said the furniture was flipped after James was dragged by his feet from the house and their cell phones were taken and had not been returned as of Friday night. The knife, they believe, came from the drawer after the tragic incident, and they believe the video was edited. Mayor-elect Kenneth C. Alexander has called for an early release of the video. Muhammad speculated at the rally that the video would be released shortly.

“It will not be favorable to Meek-Meek,” he said. But, he continued that the focus must stay on reforms to end the rash of police-involved shootings that are plaguing Norfolk.
This is the sixth police-involved shooting in 2016 – five have been fatal. “Enough is enough,” said Pastor Geoffrey Guns, senior pastor of Second Calvary Baptist Church, and one of the several speakers.

“The family had no idea that by the end of the day, they would have experienced this tragedy.” His sentiment was expressed by other speakers, including Pastor Stephens of the Community Empowerment Ministries, who facilitated the program. “The killing must stop! Our children must grow up,” Stephens said.