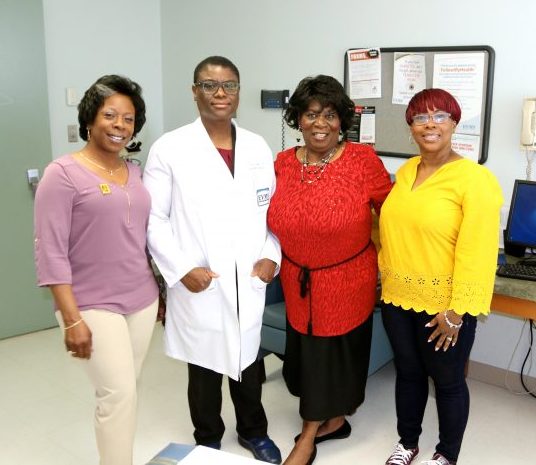 Over 100,000 plus African-Americans are members of the millions of people globally who have sickle cell disease (SCD), according to the U.S. Centers for Disease Control (CDC).

According to the CDC, sickle cell disease is the sickling of the red blood cells, and the abnormal shaping can deprive people of much need nutrients and oxygen to vital organs, such as the liver and kidneys.

One in 365 Blacks and one out of 16,000 Hispanics have it, and 1 out of 13 Black people are born with the trait. Whites can carry the trait as well, called Cooley’s Anemia, without the sickling of the red blood cells, but the disease deters them from receiving adequate oxygen to the body.

People with SCD can experience little or very mild forms of pain in a given day, depending on the type of SCD they acquire at birth.

But people with SCD can suffer from prolonged and intense episodes of pain, caused when the abnormally shaped cells congregate in the joints, blocking blood from passing into organs and causing pain and even a stroke.

Such discomfort is relieved by pain killers of varying strengths which include Morphine, the strongest; a derivative called Hydroxyurea; or over-the-counter remedies like Tylenol with Codeine or Aleve.

But sometimes painful episodes can become so severe SCD patients must be rushed to an emergency room (also known as emergency department) for relief. There they may find themselves confronted with another issue.

According to individuals suffering from the pain, upon entering the emergency room (ER), instead of immediate and effective care, SCD patients say they may be confronted with dismissive, insensitive and suspicious ER medical personnel who suspect them of seeking strong opioid drugs, to feed an addiction rather than to relieve pain from sickle cell disease.

Instead of receiving a pain-relieving and perhaps life-saving examination, oxygen treatment, restorative fluids for dehydration, and pain killers, they may be treated as criminals and deprived not only of sufficient care, but effective painkillers.

Some with SCD recall having to sit, long painful hours camped out in waiting rooms filled with people whose medical issues are deemed more serious.

At the Eastern Virginia Medical School (EVMS) in downtown Norfolk, a support group is working to raise awareness of the serious pain caused by SCD and to improve understanding of the nature of the disease among medical personnel unfamiliar with the disease.

They have been waging quiet, grassroots efforts to improve treatments by medical personnel of people with sickle cell disease through improved understanding of how the disease affects people who are being seen in hospital emergency rooms.

Quarterly, the trio has been hosting about 15 people who have SCD at a meeting room in Hofheimers Hall at the EVMS Campus.

During the meetings, they lead discussions on various issues facing individuals affected with SCD and their families related to pain management, mental health, evidence of racial bias and being prejudged as opioid drug seekers.

All three have the trait, have children affected by SCD, and have volunteered to support the aims of the Sickle Cell Association of Hampton Roads, which forged their bond and common desire to be advocates.

Judy Anderson, the Executive Director of the Sickle Cell Association ,said that there are some 5,000 plus Virginians with the SCD and the largest concentration of them, about 49 percent, live in Hampton Roads.

According to the trio, they have been collaborating with the faculty, staff and students at EVMS and the Children’s Hospital of the King’s Daughter’s (CHKD) on schooling them about these issues related to not only the medical needs of people with SCD but the impact of the nation’s growing opioid addiction epidemic on sufferers of SCD.

Creekmore said they are encouraging the EVMS faculty and students currently working to form a Sickle Cell Taskforce to teach students and veteran physicians working in the ER and as primary care physicians to better “listen” to SCD patients experiencing painful crises; to execute quick and effective treatment for them; and to address biases that would cause medical staff to label SCD patients as drug abusers.

According to SCD advocates, sometimes the patients who seek pain relief at the ER with life threatening complications from SCD receive poor care, are prescribed inadequate pain medicines and may be sent home to fend for themselves.

This can compound existing health issues caused by SCD.

The rude, disrespectful and dismissive behavior SCD patents report having experienced in the ER setting has led some people with SCD to avoid seeking proper and long term care by a primary physician, relatives and advocates say.

Some may avoid even going to the ER to seek treatment which could halt pain, thereby causing damage to vital organs that could bring on strokes and worse, death.

Recently, all three women stood before a room of EVMS medical students and shared stories of the members and loved ones in their group who recalled entering an emergency room, and being faced by medical personnel who failed to effectively respond to their medical needs, or were dismissive of the descriptions of their pain. Some described how “they felt they were treated like drug addicts.”

In order to combat the growing epidemic of abuse of opioid drugs prescribed by physicians to patients who may not have a chronic disease requiring strong pain killers, the CDC has issued guidelines limiting a doctor’s ability to provide them to patients.

States have acquired exemptions to these guidelines from the CDC for cancer.

There is now an effort to exclude treatment of people suffering from painful episodes with the sickle cell disease from such restrictive rules on receiving strong pain killers.

The SCFPA has lent its support to the Hampton Roads Sickle Cell Association in an effort to join other groups lobbying the Virginia Board of Medicine to ensure SCD sufferers receive strong meds when suffering from a pain crisis caused by SCD.

The State Board of Medicine took public comments on the issue earlier this year and the guidelines are going up the state’s political chain of command from the Attorney General to the Governor’s office for the Governor’s signature hopefully this year.

“The sickle cell disease has been here for a long time,” said Creekmore, who lives in Norfolk and has two grown daughters who have SCD. “ So have racism and drug addiction. But we want our family members and others to be able to go to the ER if they are in pain and be treated with dignity and respect.”

“We want to advocate and educate doctors, nurses and the general public about what is going on when all our loved ones want is to be treated for their pain,” said Moore, who lives in Virginia Beach, and whose 20-year-old daughter recently died of complications from SCD.

“I had to fight to convince doctors and nurses, teachers and others that my daughter had a chronic and painful disease. If you say diabetes…people understand…if you say Lupus or cancer they understand your pain. But for Sickle Cell, they do not and we want to change the perception that that people with it do not suffer from pain and are seeking drugs to abuse them.”