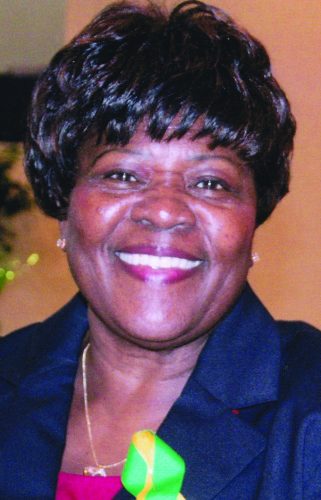 Funeral services were held in Suffolk on April 24 at East End Baptist Church for Dr. Sandra DeLoatch who retired as the provost and vice president for academic affairs of Norfolk State University in February 2017.

DeLoatch, 68, was a lifelong Suffolk resident. She passed at home on April 17. She joined Norfolk State in 1972 as a mathematics professor, and held increasingly responsible positions including founding chair of the Computer Science Department, dean of the College of Science, Engineering, and Technology, and acting university president.

She broke many barriers in science, technology, engineering, and mathematics, as an innovator, collaborator, champion, and distinguished leader. She was one of the university’s most charitable donors, having been inducted into the Lyman Beecher Brooks Society in March 2015 for giving more than $100,000 to the institution.

Through the years, she contributed to science, engineering, and technology. She championed programs, on and off campus, that have encouraged women, girls, and minorities to enter scientific fields. She achieved many “firsts” during her career including serving as the principal investigator for one of the first two research contracts ever awarded to an HBCU by the National Security Agency (NSA). Her pioneering efforts in information assurance and computer science laid the groundwork for NSU’s success in cybersecurity.

She administered more than $50 million in external funding for computer science and mathematics research and educational projects from agencies such as the National Science Foundation, National Oceanic and Atmospheric Administration, NASA Langley Research Center, Department of Defense (National Security Agency), Army Corps of Engineers, Department of Education, Department of Energy, and others. She also authored research articles, textbooks, and technical reports.

Dr. DeLoatch was a member of many organizations including the Girl Scouts and Lambda Gamma Omega Chapter of Alpha Kappa Alpha Sorority. She won many awards including the NAACP (Norfolk) Trailblazer Award, YWCA Woman of Distinction Award, Information Technology Executive Ivory Dome Achievement Award, and the Virginia Association of Educational Office Professionals Administrator of the Year, among others.

As a Girl Scout, she received many awards including three sponsored by Girl Scouts of the Colonial Coast: Woman of Distinction Award, Famous Former and the Dorothy Barber Lifetime Achievement Award. She also received two Girl Scout national awards – Thanks Badge and Thanks Badge II. In recognition of her substantial contributions to STEM initiatives and appreciation for her service, a Girl Scout patch, “Exploring STEM Honoring Dr. Sandra DeLoatch,” was created.

Her community service included vice chair of the Board of Zoning Appeals in Suffolk, secretary of the board of trustees for the Old Dominion University Research Foundation, life member of the Girl Scouts, a member of the Broad Creek Digital Inclusion Advisory Board, and a member of Lambda Gamma Omega Chapter of Alpha Kappa Alpha Sorority, Inc.

Her survivors include her custodial great-nephew, Tyler DeLoatch, brothers, Charles E. DeLoatch, Earl H. DeLoatch all of Suffolk, many other relatives, friends and the thousands of students, faculty, staff, and aspiring young people she mentored.