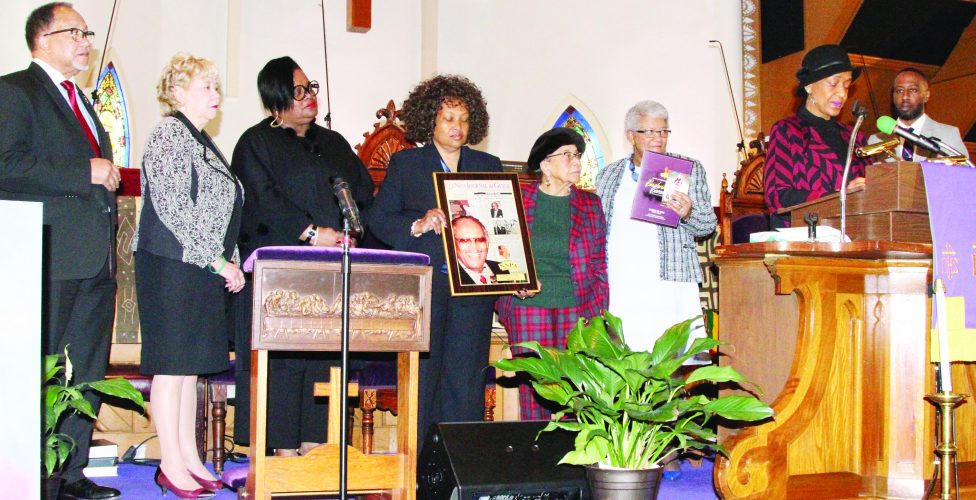 Dr. Milton A. Reid, who preferred to be called “Milton, the Disciple,” could be described as a legend in his own time. Known as “Brother” to his siblings and “Uncle Brother” to their offspring, my father was one of those types who, like him or not, made an indelible mark. He continues to do so.

His niece, Tulline Jenkins of Brooklyn, New York says, “His legacy will be preserved in our future generations of Black publishers as they reflect on what manner of man he was … Seven years postpartum and my uncle is still being honored. What a man!”

As his younger daughter, Michelle A. Reid, who served as the Journal & Guide’s Advertising Manager “back in the day” reflects, “Watching, reading and listening to Daddy being enshrined into the National Newspaper Publishers Association (NNPA) Distinguished Black Publishers gave me an opportunity to remember that not a day goes by that I don’t remember Daddy, but it was good to observe the way he was seen by others. The enshrinement ceremony reminded me of what a multifaceted man he was, yet he pooled his talents and all that he tried to accomplish around one common theme: to spread the good news of Jesus.”

Adding to the significance of the enshrinement ceremony was the venue: the historic Metropolitan AME Church in Washington, D.C., where abolitionist Frederick Douglass delivered his last sermon. Dr. Reid would have been impressed.

“I realize now that the Journal & Guide was but another means for him to accomplish his earthly mission. I am appreciative to Ms. Brenda Andrews and the other NNPA members for honoring Daddy as a Distinguished Publisher and affording all of us another opportunity to be reminded that his living was not in vain. His lifelong mission to spread the good news of Jesus was appreciated by more than we know,” Michelle recollects.

His Sister in Christ, Mrs. Ruth A. Lewis, credits Dr. Reid for teaching her “how to personally know Jesus Christ, my Lord and Savior. He taught me that it was not enough just to read the Bible but we needed to: 1. Prayerfully read the Bible daily; 2. Get understanding; 3. Study; 4. Meditate; 5. Do what the Word says do.”

Under Daddy’s leadership Aunt Ruth “had the opportunity to travel to the Holy Land and walk on the soil where Jesus walked. My second baptism was by Milton, the Disciple in the Jordan River. I had the privilege of meeting and receiving hugs from the late Dr. Martin Luther King, Junior and Senior: Dr. Curtis Harris, as well as Dr. Andrew Young and the Honorable Louis Farrakhan, to name a few,” she recalls.

The Disciple often proudly shared that he had preached on five of the seven continents. And, oh, how he preached. Reflecting on her husband’s delivery was Mrs. Marian T. Reid, who he affectionately nicknamed “Bluebird.”

His number one supporter, known as “Marian, the Marvelous” by many, reminisced that he would sometimes conclude a sermon two or three times, before he finally ended the sermon.

His older daughter (yours truly) and former Executive Editor of the newspaper, marvels at how he still keeps family and friends busy, on the road, meeting deadlines, etc., while he rests peacefully in paradise. Yes, what a man!

A beautifully designed plaque which contains a biographical sketch will be preserved in the archives on the campus of Howard University in Washington, D.C., along with profiles of other enshrined NNPA publishers. He will be remembered not only as a Black publisher, but as a Baptist minister and civil rights leader.

To lift an excerpt from the 2018 Enshrinement Ceremony program, Dr. Reid was once called “a humorous conversationalist whose religious beliefs fed his ideals. While Dr. Reid was personable in his interactions, all who knew him can attest that he never wavered from his ideals for the advancement of Black causes, including the Black Press.”

Niece Joyce Jenkins of Queens Village, New York, a writer and editor in her own right, describes her Uncle Brother as an “amazing intellect.” Says Joyce: “When I visited him in his library I told him that if I could take a tri-pipe and put one pipe into his mouth, another end to his books, and then another end to my brain, I would be amazing, too!

“I learned so much by being around him. I traveled to interesting places with him, including the hills of Danville, Virginia. I remember once we took a long ride from New York to Norfolk, just the two of us, and what a conversation we had. I also traveled with him and got to see the inner workings of the United Nations when he was presenting at a conference. A well-respected man, I remember at the UN it seemed like people almost bowed to him when they saw him. There was such an enormous amount of respect for him. I’m happy that the NNPA has chosen to honor him with this enshrinement. To God be the glory!”