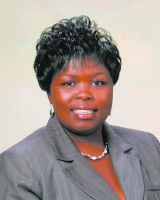 The demographic composition of the Newport News City Council is a unique one. There is a 4-3 Black majority.
Also, the panel has a 4-3 majority of women.
Councilwoman Sandra P. Scott has the longest tenure. And in order of election, there are Sandra N. Cherry, Tina Vick, and Dr. Patricia Woodbury, respectively.
According to Vick, the foursome do not crow about their position or the effectiveness of their voting bloc. They want to avoid stirring any unnecessary resentment from their male colleagues or voters.

Vick, an African-American, first elected to council in 2008 along with Woodbury, who is White, said they both encountered sexism and hostility the first year on the panel. But she said they stood their ground and eventually the male dominated political and business world of Newport News began to understand “that we were not going anywhere.”

Deirdre Condit, an Associate Professor and Chair of Political Science in the College of Humanities and Sciences at Virginia Commonwealth University in Richmond, said the current state of female presence and ability to secure and exercise effective political power has been a long and slow journey starting with the first women’s suffrage convention in 1848.
According to Condit, there are still structural and cultural factors which are challenging effective execution of political power of even high profile women such as Hillary Clinton, who is running for the Democratic nomination for president for a second time, and has served as Secretary of State and a U.S. Senator.

”There is a pipeline problem as the political parties often do not recruit or support women candidates as they do men,” she said.
Vick said the most shocking and challenging thing she encountered upon entering public service was being seen as a threat simply because she was a woman. “Because I could read, speak out on issues, know something about business, I was a threat,” said Vick, who is seeking reelection this year. ”They are surprised when you (a woman) exhibit those skills.”
Referring to male lobbyists and businessmen she has encountered on city council, Vick said, “In the beginning they felt they could just come in and because we were women, we were easily intimidated. But as time went on, that has changed.“

“Women are problems solvers on council,” said Vick, who has a real estate company. “We are not there for power. I look at my community and we see so much disinvestment. I am working to change that because a lot of politicians come into our churches around election time and we put them over the top. But we get nothing. That has to stop.”

Angelia Williams-Graves is the Vice Mayor of Norfolk, elected in 2010 to Super Ward 7 which covers half the city. She, too, is running for reelection against three male opponents in this spring’s Municipal Elections.

There are three women on the Norfolk governing panel now. Williams-Graves, Dr. Theresa Whimbley and its newest member, Mamie Johnson, an educator.
Graves had no political experience prior to gaining a seat on council, and her male colleagues, she believes, had reservations about her abilities.
“I had to learn fast…they saw me as this young girl who was an empty vessel,” said Graves. “But I asked questions; I did my home work; and I was able to lend insight on controversial and high profile issues before council. Things have gotten better.”

“But I did not know if their low expectations were due to racism or sexism,” she recalled. ”Sexism is based on your experience of watching women as players in the work place or being house wives. I get less of it from Black men because they know some woman who is working to make a difference. So I can control that.”
“But racism, is based on the color of my skin,” she said. “Like President Obama, they resist supporting his agenda … and helping him be a success, because of the color of his skin. But as a woman, I can get past the biases they want to impose on me. But I can’t because of my skin color.”

State Senator Louise Lucas has seen the male-dominated political and business world from various levels. She was one of the first pipefitters in a local ship yard; was CEO of STOP, Inc., a community action agency; lobbied the General Assembly for ODU; founded her own business; and is now representing the 18th Senatorial district from Portsmouth, after having served on Portsmouth City Council.

She and Senator Janet Howell have both served 25 years in that legislative body. Both were sworn in on the same day 25 years ago. They arrived to be sworn in at the same time, drew straws to see who would go first, and Howell got the lottery.
One of eight women in the 40-member Senate, Lucas has the third longest tenure. She said the sexism and disrespect Blacks and female business and political leaders encounter still persists.

When she arrived in the Senate, she was mentored by the late Senate Senator Yvonne Miller, the first Black woman in the upper house of the General Assembly. Lucas said the late senator schooled her about the dual barriers of sexism and racism she would encounter as a lawmaker.
“There is still that disrespect and disregard for the presence of women in the legislature because of sexism and because there are so few of us,” said Senator Lucas, a native of Portsmouth. “They do not see the real significance of our presence and mission. When Senator
Miller was with us, she talked about the same ‘isms.’”

“They do not respect the fact that we have constituencies,” she said. “Black female lawmakers represent more than just Black people. We represent people of all races, religions and incomes. And this disrespect hinders our ability to serve our people and progress on achieving our goals.”

Like Graves, Lucas says this has intensified since the election of the nation’s first Black president.
“This disrespect and disregard has hurt our ability to progress,” she said. “Look at the vitriol of the Trump Campaign. Look at the obstruction which has become even more prominent since Obama was elected because they have hindered him from addressing many of the problems Black and poor people in this country face.”
During the legislative session which recently ended, Lucas made news when she accused leaders of her own party, including Democratic Chair Donald McEachin, who is Black, of working against the aims of Black lawmakers seeking to address issues specific to their districts.

Upon being elected a State Delegate in 2012, Daun Sessoms Hester of Norfolk, became the first Black woman elected to the House from Norfolk. She was the second woman elected to the Norfolk City Council and also served as Vice Mayor. She ran an unsuccessful race for mayor of her home town before moving on to the state level.
She is one of 18 women in the 100-member House of Delegates.

Like other women in state or local political leadership, the process of learning how to work the levers of political power has been a slow process, she said.
Also, she said, the dual roles women play in society often restrict their ability to get into the political field as early as men and with the financial support needed to sustain themselves and family.

“This is still a hindrance to women in politics,” she said. “Not disrespecting elected office, but being the caregiver at home is a very important role. So women of color often do not have the resources at home to pursue opportunities for a career as lawmaker and homemaker at the same time.”
“There is also the idea that woman are not as tough and effective as male lawmakers,” said Hester. “Many of us are just as strong-willed as men. But we have a different … more strategic way of getting our point across than men. Some people believe that we would have better cooperation and legislation in the General Assembly if there were more female lawmakers.”