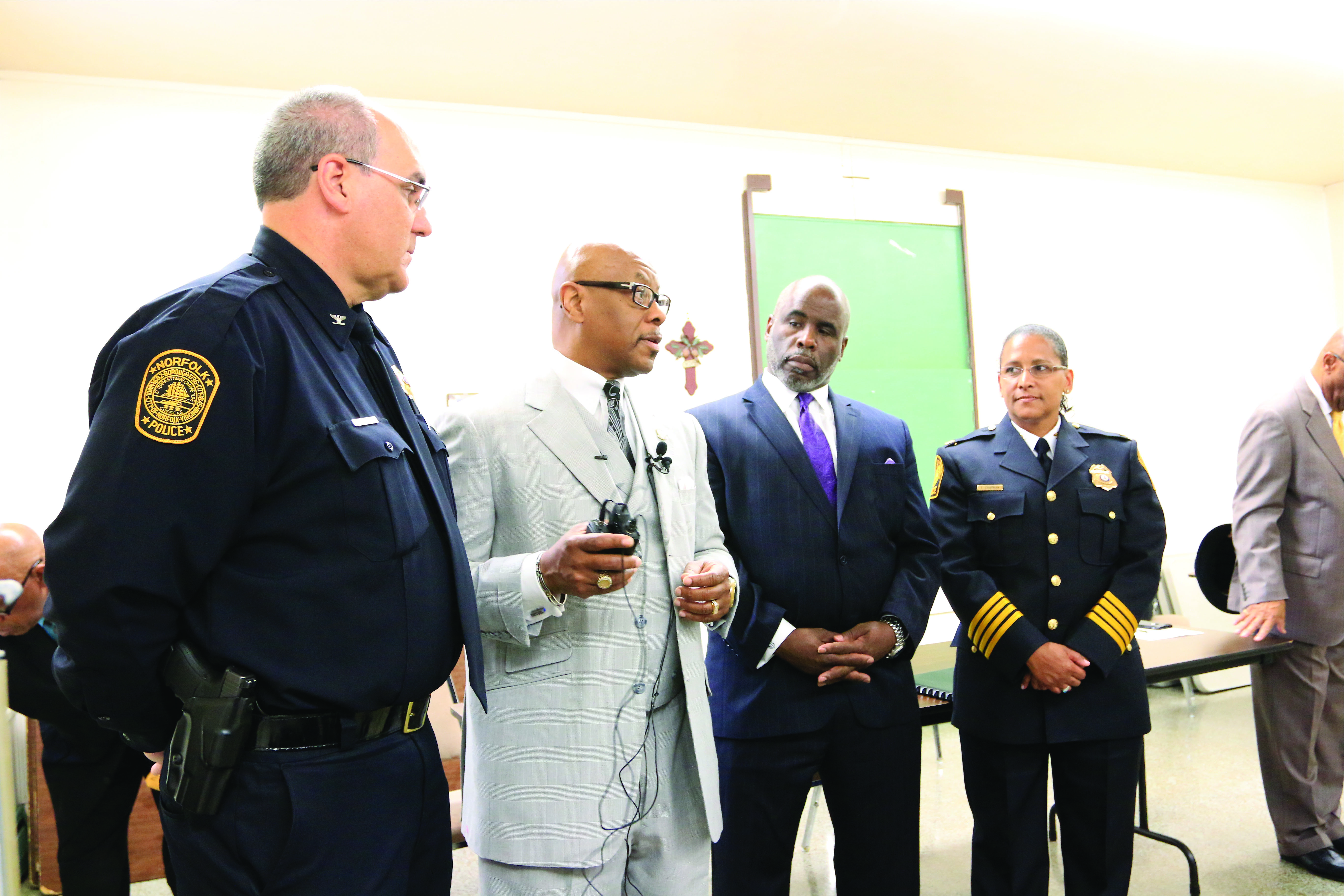 Since January 1, 2016 the city of Norfolk has recorded some nine homicides. Last year Norfolk recorded 35 homicides, and Portsmouth, 27.
Many of the homicides specifically occur in the Black sections of these cities and most of the assailants and the victims are African-Americans.
To address the issue and hopefully curb it in the coming months as the temperatures rise, the Tidewater Metro Baptist Ministers’ Conference (TMBMC) is launching an initiative called “Speak Up” Against Crime in the community.

The plan was unrolled on Monday (March 14) during a press conference at First Baptist Church Bute Street by TMBMC, the Norfolk’s Pastor’s Coalition and other concerned pastors. Lending support and presence were Norfolk City Manager, Marcus Jones, the Police Chiefs of Norfolk and Portsmouth, and a representative of the FBI.
According to TMBMC leaders, pastors will address the topic as part of their sermons from the pulpit on the fourth Sundays.

Rev. Keith I. Jones, Senior Pastor of Norfolk’s Shiloh Baptist Church, explained the details of the initiative to the New Journal and Guide. He said pastors across the region will be asked to address the issue of crime in their communities before their congregations. He said the first of the “Speak Up” Sundays was held in February.
“Crime in our community is region wide,” he said. “But Norfolk is the epicenter. We, as preachers and the public, no longer have a right to remain silent on the issue. Silence breeds violence. We can either spend the time to talk about it or pay for it later.”

Rev. Jones said the initiative is not only about religious leaders fostering awareness from the pulpit, but including residents, civic leaders and the police department in vital roles.
In developing the plan, the pastors concluded that Blacks need to be more proactive about abating crime in their communities and providing much needed information to the police so they can do a more effective job in fighting it, Jones said.

During the March 14 Press Conference at Norfolk’s Historic First Baptist Bute Street, where the TMBMC meets weekly, police officials introduced the prototype of an “Anonymity Box” which will be placed in churches throughout the cities. Members will be encouraged to drop notes with “tips” on crime activity in their neighborhoods which would be useful to the police in combatting crime.

“People want to cooperate and talk about retaliation,” said Jones. “They also do not trust the 1-800-Lock-U-Up crime lines. So we will be urging people to drop tips of information into these boxes. They do not have to leave their names or other vital information. But this is a way to fighting crime as well.”
Jones said only the Police Division Resource Officers will have access to the boxes, its contents and the information placed in them, so they will not be compromised.
In the coming months said Jones, area pastors will get permission to enter the public schools and be “mentors” to youths, especially young Black men, who are often the targets and committers of the violent crimes in the nation’s urban centers.

Jones said ministers will be encouraging the leaders of area civic leagues to be more proactive with cooperating with police officers.
Jones said there are various reasons for the steady pace of violent crime in urban centers such as Norfolk.
He said that poverty is the key factor. The lack of education, he said, lures and snares many Black men and women into a web of poverty, long periods of crime and incarceration.
“Also a lot of the people are disconnected from spiritual and moral values,” he continued. “We were taught in Sunday School ‘thou shall not kill or steal.’ God, church and home were the underpinning of our communities. Our children are not being taught commandments these days or the importance of valuing life.”

He said better relations between the police and the Black community would promote cooperation and reduce the longstanding tensions and distrust between the two, especially in the low income areas of the region.
Jones said when he grew up in the Carney Park Public Housing area in the Titustown section of Norfolk, he recalls his mother giving him “the talk” about how he was to respond if confronted by a Norfolk police officer.

Norfolk Police, he said, had a nasty reputation of abusing and disrespecting Black people as policy, especially during the administration of Chief Claude Staylor. There are news accounts of his officers unleashing police dogs on Black people and battering them.
“We need more community policing,” said Jones. “Not every conversation with a police officer should begin with ‘can I see your I.D.’ Black people need to see the need to support and cooperate with police.

“At the same time, police need sensitivity training,” he continued. “Police departments say that foot patrols where officers can engage citizens have been reduced because it’s a resource issue. But I think it should be a priority.”

Rev. Steven Lewis, the Senior Pastor of the Mt. Hermon Baptist Church on Lens Ave. in Norfolk, was a Norfolk Police Chaplain for 15 years.
He says he understands the responsibilities of officers as well as the stress which impacts their individual and family life.
But he also knows the impact of violence and crime on the urban communities that his and other churches serve.
“Lack of education and opportunities are a key factor,” said Lewis. “Recidivism is a key, too. When these guys come out of jail, pay their dues to society, often they cannot find a job especially felons.

“So they go back to their communities and start hustling to make money, the only way they know,” said Lewis. “We are spending far too much on the penal system when people keep going back to jail. So the city governments need to create employment opportunities for these men and women to give them a home and opportunity.”
Like Rev. Jones, Pastor Lewis said the family structure or lack of it, is showing signs of stress not only in the low income areas, but middle income ones too, and it is taking its toll and contributing to the rise in crime.

“We have another generation of children raising children,” said Lewis. ”Many are in single parent homes. So the streets are raising many of our children, contributing to the crime because of the lack of education and the lack of respect for life in our community.”

Portsmouth Mayor Kenneth Wright said he recently attended a rally at Hampton High School called Virginia Unity organized by faith leaders which is seeking the same aims as the TMBMC.
The one Wright attended was the second one held to bring attention to crime and how the church and other civic institutions can work to deter it.
Rev. Jones said the TMBMC will seek to work in concert with the effort on the Peninsula to create a regional effort.

“With all of churches we have in this community and the influence they exert I think these efforts are one of the tools we can use to combat crime in our communities,” said Wright. “People are always talking about hiring more police. But you cannot hire enough police to fight this situation. Policing is a way to combat it, but you need the church, the civic leagues, the families and other parts of our community. Also we must stop just sitting back. Yes, we no longer have a right to remain silent about something tearing apart our community.”
Rev. Curtis Edmonds, who has been on the Portsmouth Council since 2010, said that the pastors are offering a wholistic approach to curbing crimes in the very neighborhoods where their churches sit.

“It will take a village. All of us are responsible for stopping crime in our communities including our churches and civic organizations,” said Rev. Edmunds, Senior Pastor of St. Mark Baptist Church in Portsmouth.
“But we got to do more than just hold meetings and talk about this issue and devise ideas,” said Edmunds.
“We must take those ideas to the street and fight the problem. This is not just a Black thing; all people are affected by this problem. So we must work together to fight it.”